For the last three days, I’ve looked pretty much like this: 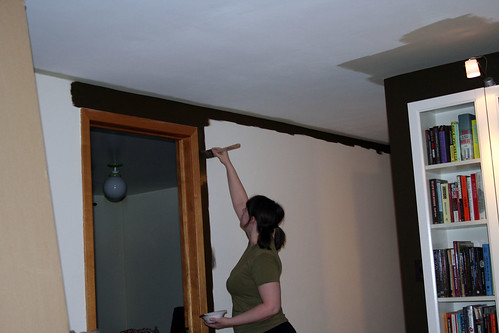 Painting, painting, painting. But I finally chose a color for the ceiling! It’s “flowering herbs”, or as Brandon’s family calls it, “Cooney green”. I don’t know the whole story, but Brandon’s Grandma Cooney used that color (a lot?), and subsequently everyone else in his family has used it in one of their rooms. We were thinking of using it for the guest room, but I thought it would be a beautiful ceiling color for the library (and it is).

We still need to paint the trim white, but the ceiling and the walls are done! Two coats of paint each. Whew. I’m tired.

I know the smart thing to do would be to leave the area clear, because we’re going to put all of our bedroom furniture out there while we put in our new floors this weekend. I just couldn’t though. It seems so anti-climactic to spend three days painting, and then just leave it. So… I brought up some furniture and set up the alcove. The black table was my first purchase from IKEA. I think I was 16! The lamp was in my office, so it will probably go back (unless I buy a new lamp for my desk, which I certainly wouldn’t mind doing). The chair is part of a set of four that I grabbed from an alley – I think they were from a waiting room. Two of them have arms and two don’t. I may bring the other armless one up for the other side of the table (in front of the window). The curtain and the pillow are from Pier 1. I’m not totally crazy about them, but I do like them. Really, we needed some curtains and we needed them quickly, so those seemed fine.

The rest of the space is still crazy and messy, but at least one corner looks nice!

Sleeping in the Hallway. 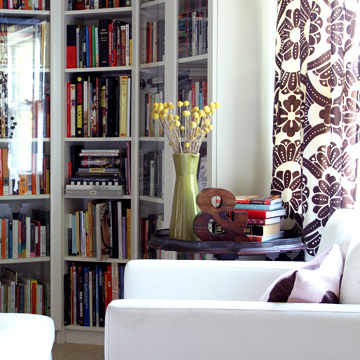