A few years ago, my mother-in-law (thanks, Helen!) gave me a little stainless steel set that I believe was her mother’s. It had a little tray with salt and pepper shakers, and a sugar bowl. Well, I thought it was a sugar bowl. 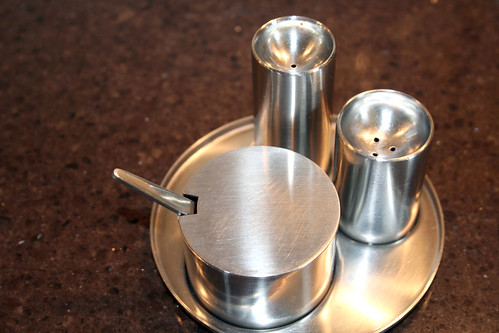 I was cleaning it today, and I decided to google the manufacturer’s name (Stelton Denmark). It turns out that the little ‘sugar bowl’ might actually be a mustard pot, at least according to unica home and the rest of the interweb.

I was more surprised though to learn that the set had been designed by Arne Jacobsen! It’s part of his Cylinda line from 1967.

“Hmmm”, I thought. “I have a book about Arne Jacobsen. Maybe it will be in there.” [Note the ridiculous use of quotes. I am ever so writerly.] Anyway, it was in there: 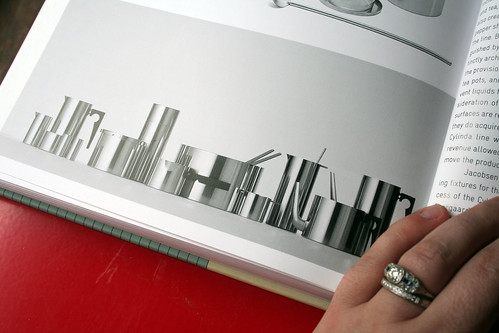 Like the commercial version of the AJA flatware, the new line jettisoned the ornament and associations of traditional silverware in favor of a machined product that reflected both the nature of the material and Jacobsen’s own vision of sensuous utility.

Now, the book doesn’t make any mention of a mustard pot. In fact, the picture credits it as a sugar pot. And that’s exactly how I intend to use it.

Orla Kiely (and Other New Details) in the Kitchen