My, What a GIANT TV You Have!

My sister-in-law called to see if we wanted their plasma television, since her husband had just bought a new one. How generous (thank you)! Brandon was very excited, and we got the new TV today. 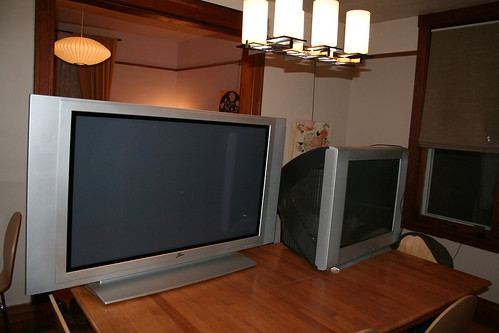 Unfortunately, the new TV is actually wider than the stand we have. It also overlaps the door trim and the lightswitch (though you can reach behind it to turn the lights on and off). 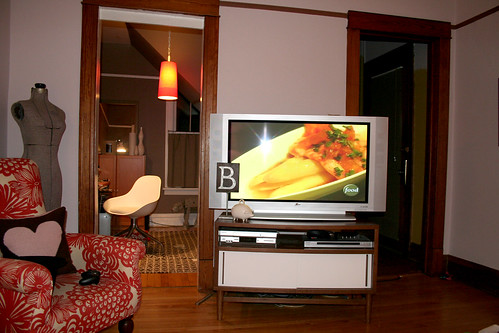 It’s a really nice television, but it’s a bit too big for the room. Still, I told Brandon we could keep it if he really liked it. He wants me to be happy with a smaller, less noticeable TV. I want him to be happy with a high-definition, big-ass TV. He plays a lot of games and watches movies, and I only watch HGTV and trashy reality shows (don’t judge). Therefore, his television viewing needs trump mine.

We tried hooking up all of our components (3 game consoles, a VCR, a DVD player, and cable), but we couldn’t get everything to work. Sometimes we only had sound out of one speaker, sometimes we had nothing at all. I think we could have figured it out or bought some kind of adapters, but Brandon said we should just put the old TV back. 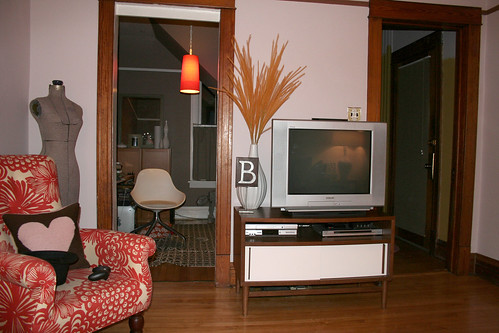 What do you think? Yeah, the plasma screams “Welcome to our living room, WOULD YOU LIKE TO WATCH A LITTLE TV?“, but it’s a plasma. That’s pretty nice, I’m told. The old one (clunky and big as it is in the back) doesn’t jump right out at you and I can put my big vase next to it… but it’s just a regular old TV.

p.s. The upside to all of this is that I wrangled all of the cords in the back and organized them. I hated seeing the big tangle of wires below our cute TV stand. I can be a bit persnickety about things sometimes. Organized cords = a happier me.

p.p.s. The plasma TV will have a good home if we don’t keep it. Our brother-in-law would give it to his brother.

p.p.p.s. You can see my unfinished paint job from this weekend to the right of the TV, by the front door. 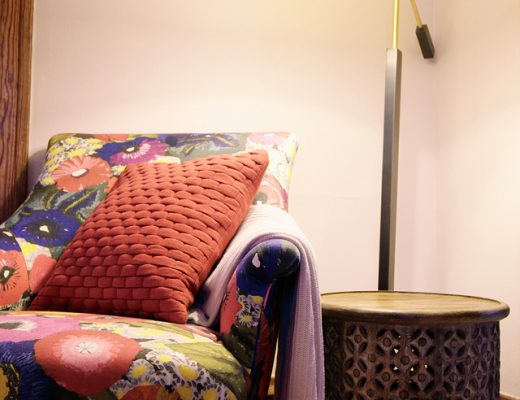 The New Side Table