The Blog Has Been Fancified

Not being one content to leave well enough alone, and less than a month after moving to WordPress, I’ve redesigned the site.

Well, it’s not a really a redesign… what I did was more for functionality. Of course, I had to make things a little prettier while I was at it. ;)

Making it Lovely has gone through four redesigns so far; two with Blogger and two with WordPress. 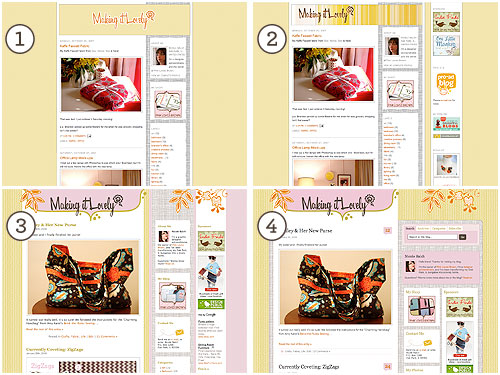 Version 1 was a very simple two-column Blogger blog. For version 2, I added an additional column to the right side of the page and switched out the header. Version 3 was for the big switch to WordPress (blogged about here), and it was based on the default Kubrick theme.

For version 4, I worked off of the WP Premium theme from WP Remix (which I first saw on Kitty’s blog).

I heavily hacked and modified everything, and I still have some work to do, but the main elements are in place. There’s a bit more breathing room at the top now that the columns don’t stretch all the way up, and I’m most excited about the nifty tabbed navigation in the sidebar.

WordPress rocks my socks off.