The popcorn has given way to a smooth, flat ceiling, thanks to Brandon’s hard work. As I mentioned before, the ceiling did not contain asbestos (always check before removing because many popcorn ceilings do), so we felt comfortable trying to remove it. It came down easily enough in just a few hours (he sprayed it with water and scraped it off), but smoothing the resulting mess took a little longer. He did a rough sanding (60 grit) first, wiped all of the dust away with a damp cloth, smoothed over all of the imperfections with joint compound, and then sanded everything again (220 grit).

I’m the more handy one out of the two of us and I felt bad that I couldn’t help, but we didn’t think it was a safe job for a pregnant lady. Oh yeah, I’m also a wee bit of a perfectionist… It was really hard to not go in there and obsessively sand and smooth and do things myself. After priming and painting though, the ceiling looks really good. 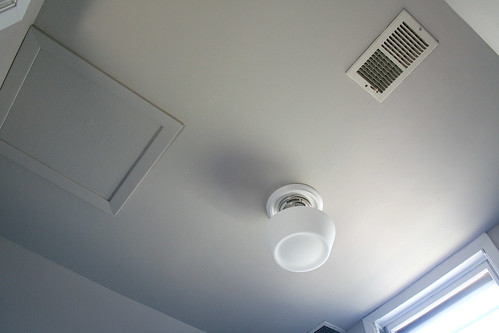 The new light looks great, though we did have to run out and grab a ceiling medallion. I’m not really a fan of them, but Brandon had a hard time smoothing out the ceiling near the light, and the medallion was an easy solution to hide the remaining popcorn texture. I haven’t decided yet if I’ll leave it white or if I’ll paint it the same color as the rest of the ceiling.

Now, I know people get a bit nervous when dealing with electrical projects (we do too), but changing a light fixture is EASY. We’ve done it six times so far in this house (in the living room, dining room, kitchen, bathroom, studio, and nursery). You just make sure the power is off, take down the old fixture, connect like wires to like wires, attach the ground wire to the little green screw on the mounting bar, and then attach the new fixture.

We decided to keep the room the same color (Wheat Bread by Behr), but it needed a second coat of paint. Really, it’s always needed that second coat, but I think I was too tired when working on the guest room before and I just figured ‘good enough’ (which is so uncharacteristic of me). It has bugged me ever since. So now we’ve painted the ceiling and walls, and even did some touch up work on the trim, and the guest room is officially ready to be switched over to a nursery. 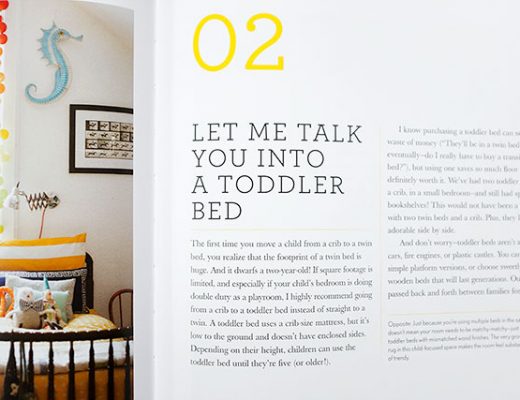