Plans for the Library

Our “library” (the landing at the top of the stairs) looks pretty good. I mean, it was even in a magazine not long ago… but I’ve always thought that it could look better. 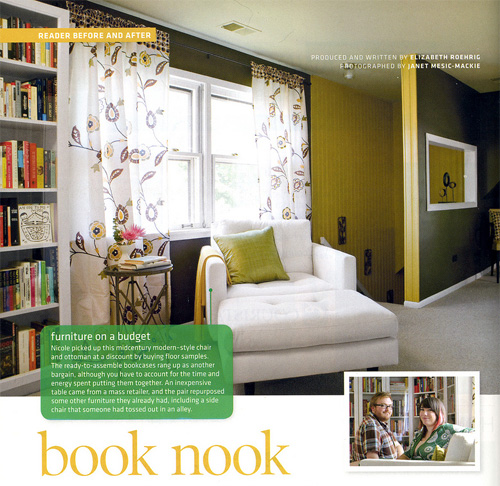 The little light in the room is horrible and it doesn’t even fully cover the hole in the ceiling for it, but I’ve had a hard time finding a replacement because our ceilings upstairs are only 7.5′ tall. I had ordered this Jonathan Adler light previously, but it was far too large for the space and we used it in my studio instead. I did see this light recently, and it may work since it’s a bit smaller.

The stairway woodwork has been painted mustard yellow (“Campground” by Behr), which does look nice with our current curtains, but I was never a huge fan of those. They’re okay, but not great. I’ve always loved Amy Butler’s Lime Primrose fabric, and seeing it recently as pillows made me revisit the idea of using it for new library curtains.

I’m just a little worried that the fabric won’t work with the yellow wall. Brandon’s mom gave us a curvy wooden side table recently (and the go-ahead to paint it or do whatever we want to it), so maybe it would be nice if it were painted the same yellow? I also have a neat little side table on the way that could be painted. Or we could keep a dark brown side table to match the legs on the chair and ottoman, and rely on the mustard yellow throw that’s in the room (which was just $1 at goodwill). The Orla Keily pitcher from Target that I’m eagerly awaiting (used as a vase with some pink flowers) would be nice too. 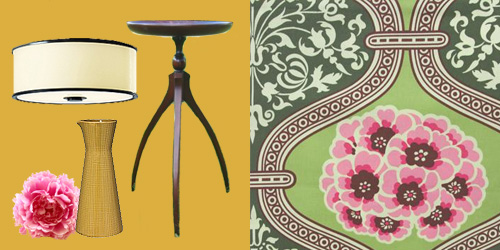 I love the fabric so much, I’m determined to make it work. 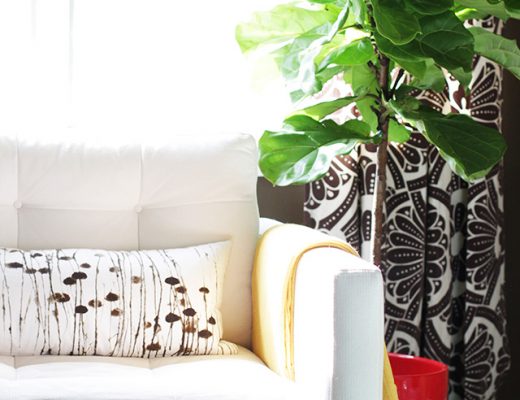 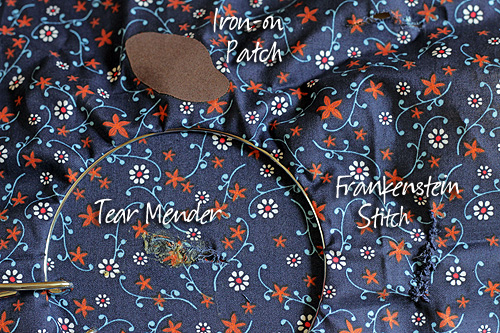 How I Repaired a Tear in My Chair’s Upholstery