Remember this floor plan sketch for the basement, with the storage units labeled GORM (which is either a really unfortunate name or an IKEA product)? Right. Well, I went out to IKEA last week with the little ones in tow to make it happen. I’d promised Eleanor a visit to Småland, so she played while August and I hit up the utility shelving section. The shelving I’d planned on was cheap, but it felt cheap. Wobbly and thin, I was afraid it wouldn’t hold up well, so I went for IVAR instead.

Five days later, Brandon took all of the pieces out of the car and brought them downstairs. I took over from there. 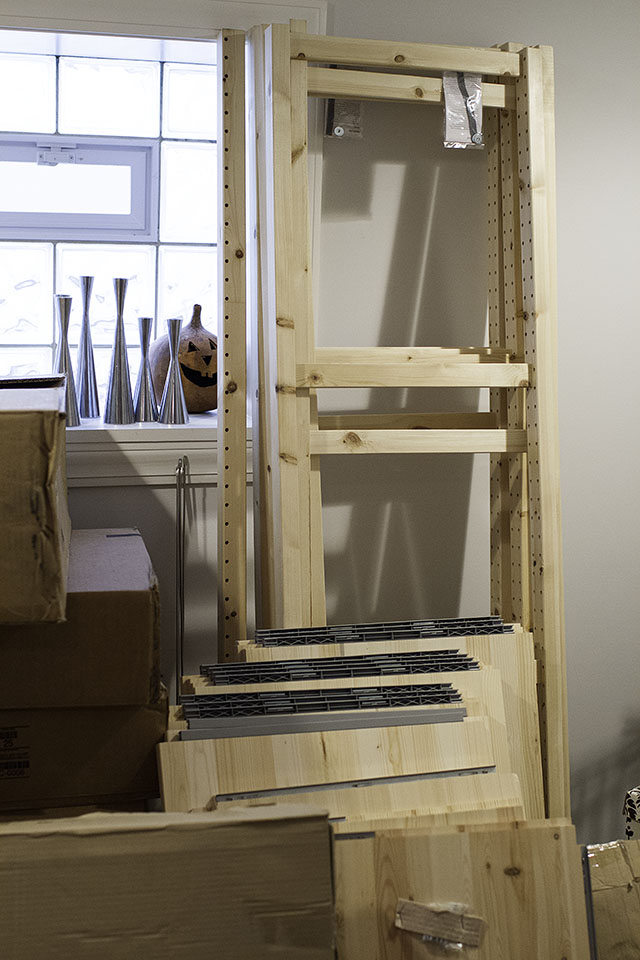 Building the corner unit went smoothly. Each shelf has a tiny plastic pouch with its six pegs stapled to it. You just line those up in the end and corner supports, rest a shelf on top, and away you go. I assembled it, attached the whole thing to studs in the wall, and was done in 15 minutes. Next, I wanted to build the chest of drawers I’d bought. It was an expensive component but I figured the drawers would prove useful.

The instructions showed the chest installed with a cross-brace above, and I realized I’d have to move the corner unit to attach a brace to the side. Not a big deal; I just had to unscrew the safety strap attaching it to the wall. I went to get a shelf so that I could determine the proper distance, and I realized I had no pegs. The corner shelves each had a piece of wood beneath for stability, which allowed space to attach their hardware pouches. The others are just shelves that stack flat against each other. Of course by the time I’d reached the warehouse section of IKEA with two punchy children up past their bedtime ready to run around or melt down, that detail didn’t register properly. I also overbought long shelves and now need to return to IKEA for shorter versions, along with my 48 missing pegs. I don’t do well with last-minute changes, clearly.

No matter! I took one corner shelf out and used the pegs to attach a shelf along the top, I lined another shelf up along the floor, and took measurements that way. Whee, problem solved! Why do people have such a hard time assembling IKEA furniture? 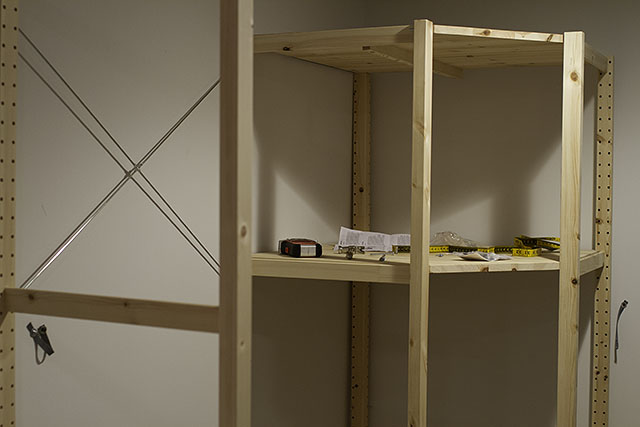 I attached the cross-braces to two sections, congratulated myself on a job well done, anchored everything to the wall, and moved on to build the drawers. As I put it together, stopping intermittently to take photos, I was composing this blog post in my head.

Whee, what fun! Let’s stop and take pictures! Note that this is step 1. This will later become important. 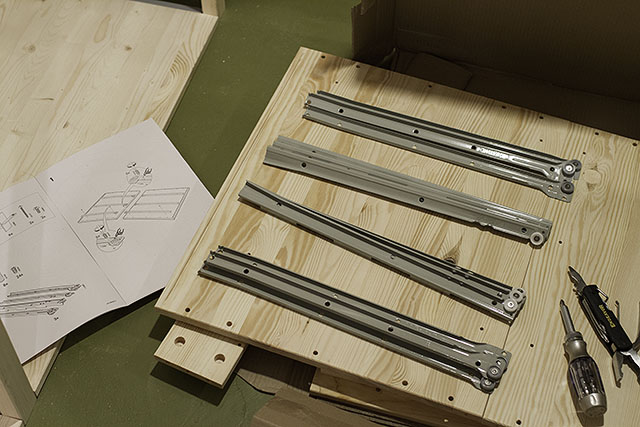 I was running out of room in the small storage room of my basement, but I wanted to build everything right there. The chest weighs 70 pounds, and I wouldn’t be able to move it myself if it was fully assembled in another room because it would be too bulky. (I wanted to build everything myself.) So I cleared a small area and got to work. The directions weren’t clear and attaching the drawer glides was confusing because you had to intuit everything from illustrations, but I figured it out. Drawer glides, attach the sides, slide in the backer, attach the last side, done. Time to build the individual drawers.

Since I didn’t have much room, I figured I’d be clever and build just one and make sure it fit, attach the case to the shelving supports, then build the other two drawers. So I did. And that drawer slid in so smoothly into the middle slot. Success! I did a little dance and got back to work. The chest was heavy and cumbersome, but not impossible to get into place. (Again, I wanted to do this all myself.) I finally lined everything up just so, screwed the final brackets in place, and slid the drawer I’d already built into place. I put it in the lowest slot this time, then noticed the three-inch gap along the bottom. I chastised myself, channeling Brandon in my head with appropriate Star Wars nerdery, but apparently the phrase isn’t even “don’t get cocky, kid.” The “kid” part comes just before. I didn’t even get that right. 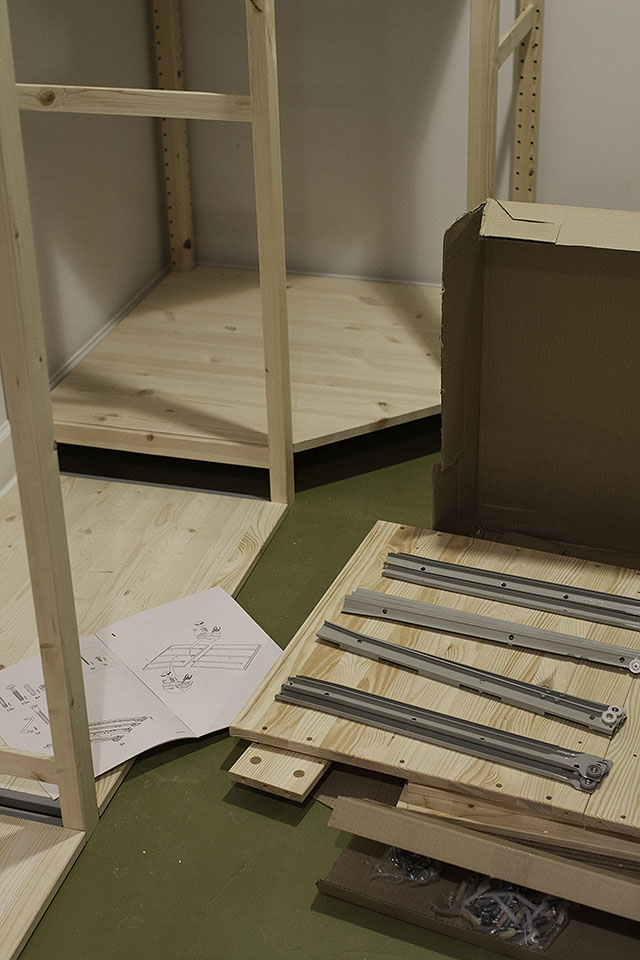 I fumbled for the next 15 minutes turning the drawer upside-down, then removing the unit I’d just gotten into place and turning the whole thing upside-down, and still I couldn’t get my drawer to line up. Finally, I realized I’d attached the glides incorrectly. They had to be unscrewed, turned and flipped, and reattached. Remember step 1? Yeah, that’s where I screwed up. After I’d corrected my mistake, getting the chest back into place was much more difficult than it had been the first time. Of course it was more difficult! This is why people hate assembling IKEA furniture!

Six hours after I’d started my shelving project, I got the chest and all three drawers into place, threw a few fake plastic trees on a corner shelf (sans green plastic watering can), and called it a day. 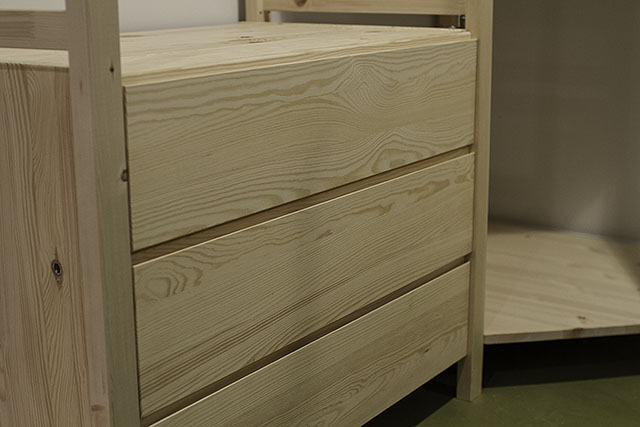 Now I’m steeling up my nerve to return to IKEA, brave the returns area, and get my stupid pegs so I can finish the storage shelving.

Edited to add: Pegs! I’m an idiot. (Thanks, Amanda.) What would it take to convince everyone that this was an April Fool’s joke? 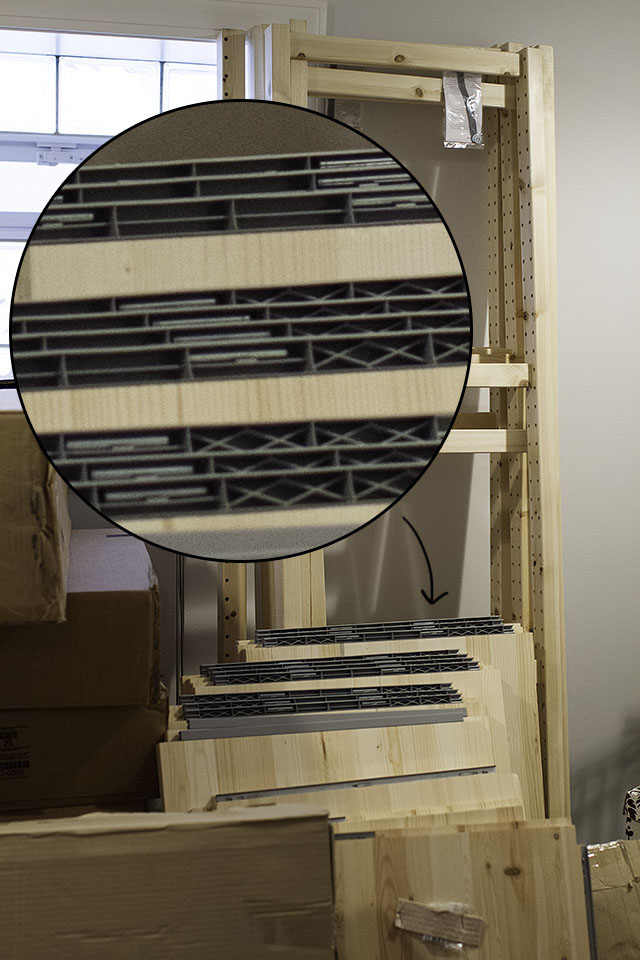 In Search of a Bathroom Mirror