You saw the library last week, yes? The rug was on loan for a styling competition and it’s already on its way back, but the chairs that were supposed to be temporary are going to stick around for a bit longer. They’ve actually come in handy and the kids really like them! Well, that, and I totally lost the tags and receipt. What’s up, new chairs? 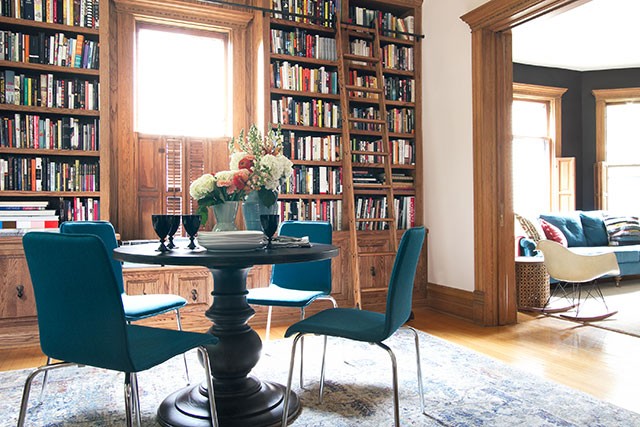 No, I didn’t intend to keep them. I picked them up in the first place because they were:

They’re staying, for now, but I wouldn’t hesitate to sell them off at a steep discount. My loss, my mistake.

And here’s the thing. You know how you might kind of suspect something (ooh, those chairs aren’t as good as they could be), and then you have this weird job where your house and everything you do to it and put in it is shown to tens of thousands of people every day?* And then the choice you were least confident is indeed the thing people pick up on and don’t like? Yeah, that.

“They don’t really go with anything in the room and seem like nothing more than a last minute attempt to add a vibrant color to a relatively toned down room as well as looking like they ran out of money right at the end.”

Oof. I know. So here’s a little peek behind the curtain at what I would have really wanted to do for the rug shoot, had time and money not been a factor. (Aren’t those always the deciding factors?)

* Psst: I do love this job. I can take constructive criticism just fine (or worse), so I’m not complaining! Plus there were plenty of lovely, nice, complimentary comments as well. But you have to admit, it is a weird position to be in, right?

First up, the Roadhouse Leather Chair from CB2. I’ve written about these before, and a few other similar options. I would have gone with these, had they been in stock. It’s a lot of brown, but the leather adds a different texture that I like a lot. 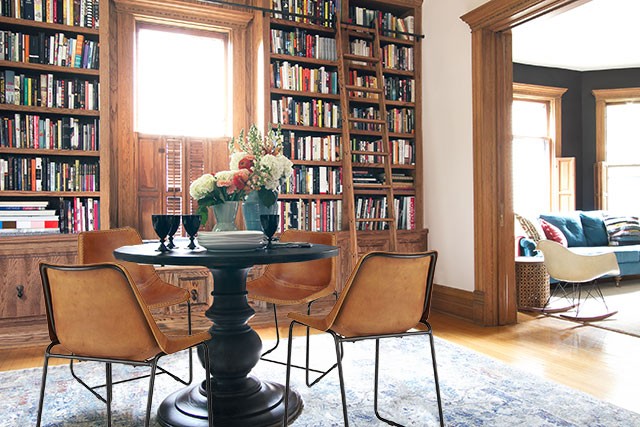 Continuing on in that vein, we have another leather option. This time, the Baldwin Armchair from Jayson Home. I wouldn’t have been all that interested, having only seen them on the site, but in person they’re fantastic. Great scale, rich leather, just a nice, versatile chair. 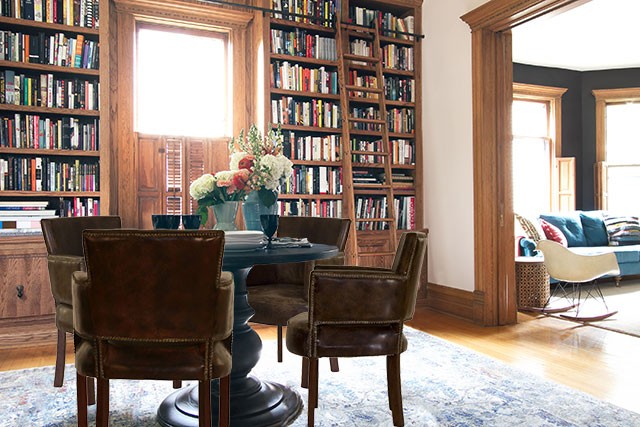 That Eames rocker in the background does not go well with these. Ignore it. (It didn’t make the final shot anyway.)

How about some Wishbone chairs? I’ve always liked the look of them. 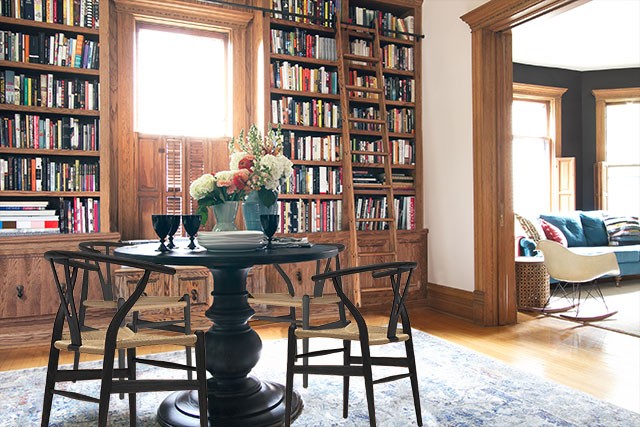 Nice, but they’re not really working here. Hoffman Prague chairs instead? Those are great too. 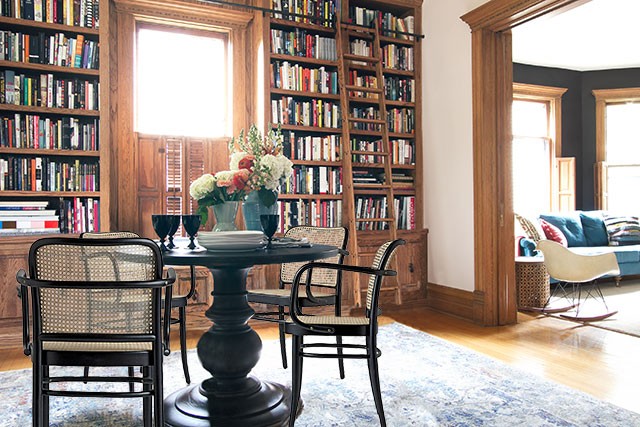 I like those. Definitely more “dining room” than “library” but that’s OK. I was staging it with glasses and plates. Thonet, windsor chairs (and modern interpretations like West Elm’s Scissor Spindle dining chair) — they all have a similar feel, just a tweak to the overall look. We’ve got a lot of mockups happening already here; let’s move on to something different!

Stripes! I may sell the striped sofa at some point (too long for the space). Go with these instead? 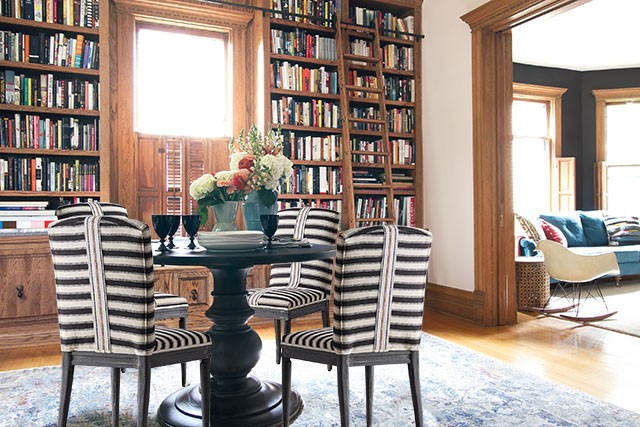 I like them, but I don’t love them. Maybe a couple of these hostess wingback chairs from World Market. They’re a little larger, so just a pair instead of four. 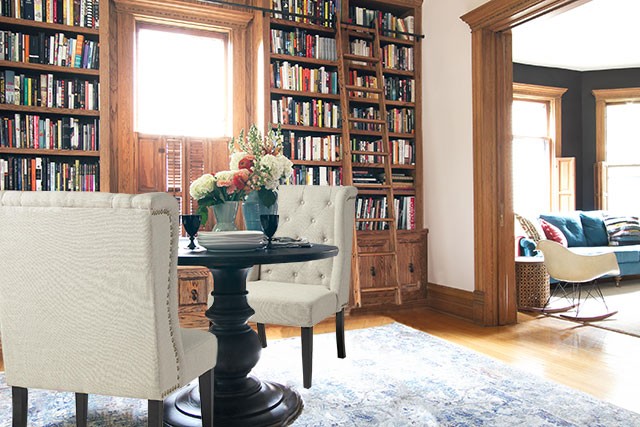 The color isn’t really working with that rug. Something darker, but still with some blue to reference the sofa. Like this. 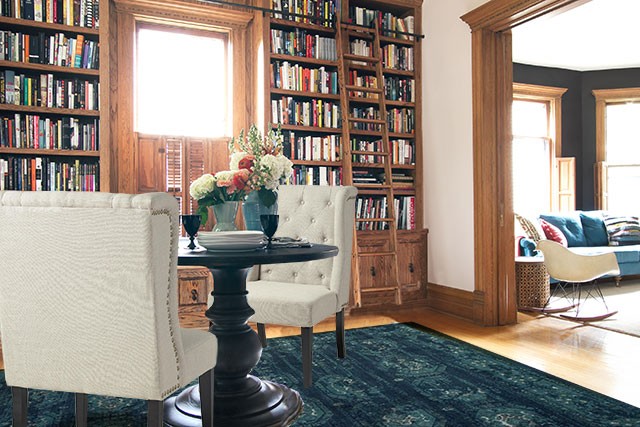 Ah, but that kind of defeats the whole purpose of the shoot then, doesn’t it!

OK, we’re getting closer. I like the wingback and I like the upholstery, but it needs to be a different color. Restoration Hardware offers some nice fabric options, and I’m fond of their 1940s Wingback side chair. In blue? Charcoal? Mustard velvet! (OK, I’m probably the only one that really likes mustard/ochre/shades of brown/tons of wood. But so what? I’ll own it if I love it and nobody else does.) 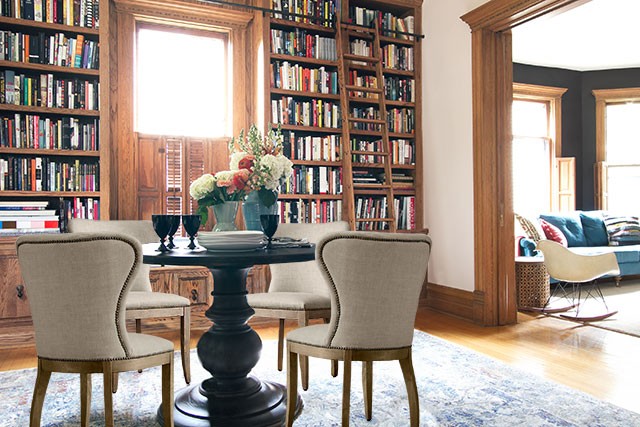 Except those are all custom orders, and they would take too long. Plus, then they’re ours for keeps and whoa whoa whoa, what’s all this talk about commitment?

What’s that, Target? Your cute chairs are $40, the right color, and you have them all in stock ready to go home with me immediately? All right then, sold. And since I’m a scatterbrain lately, they can stay for now. At least it won’t sting too badly when the kids inevitably drop a marker on one of them while coloring — although that only ever seems to happen with the super nice things you pine and save for.

Now on to the important stuff. Which chairs are your favorite? And did you know that after making a bunch of these and coming across a chair I wanted to mockup that didn’t have the necessary alternate angles, I briefly thought I could turn it around in Photoshop so we could see more of the front? 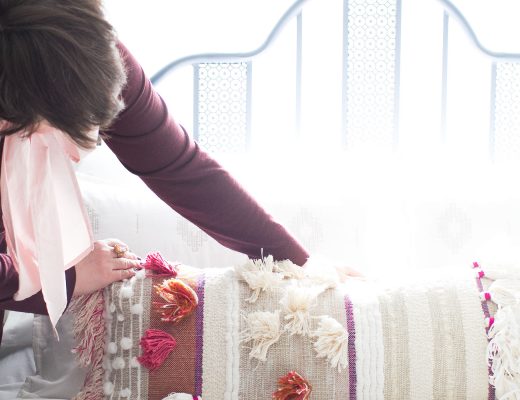 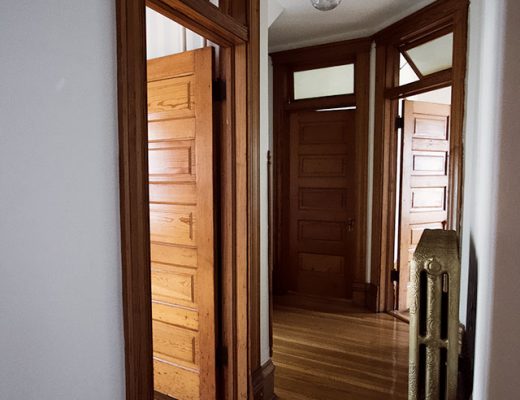