Red and light blue — those were the only parameters I was given by my six-year-old. You got it, kid! 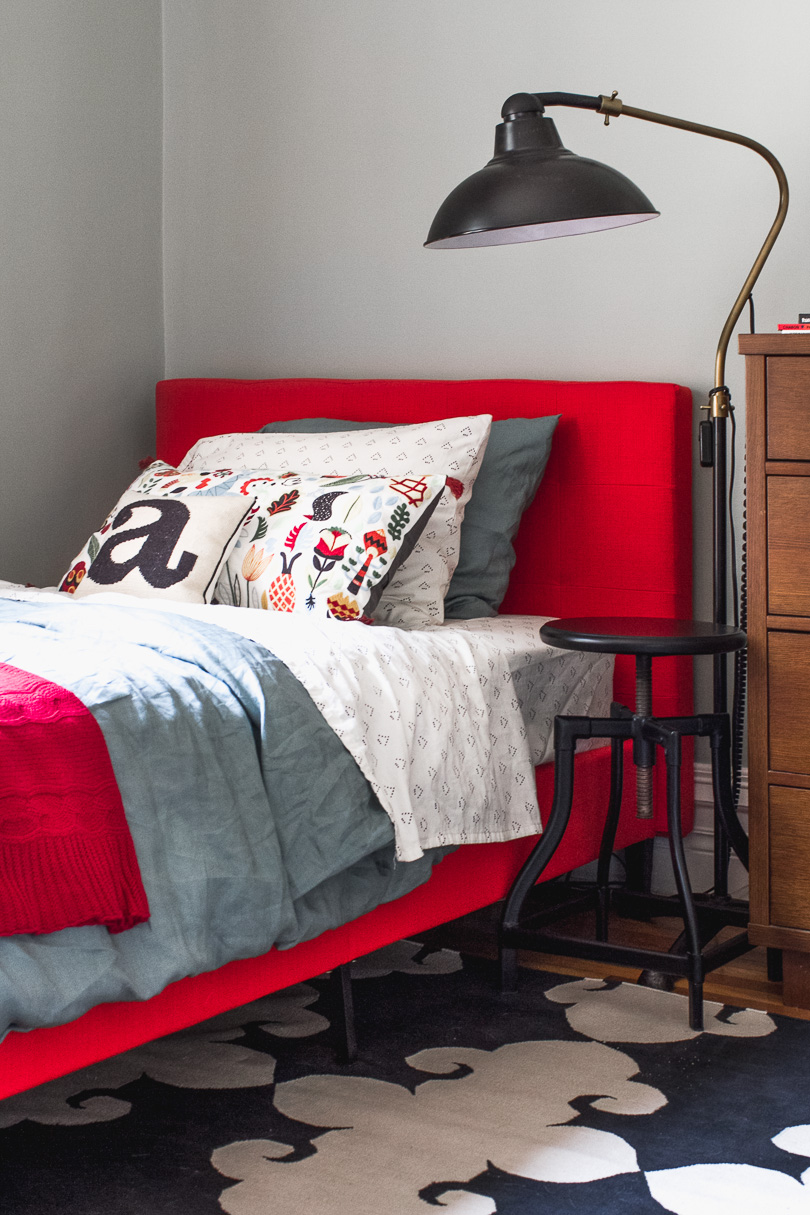 I approach kids’ rooms a little differently than I do the other spaces in a home. If it’s important to a child to incorporate their favorite color, there are ways to make it work. August had been adamant about red walls for a long time, and I was ready to go with it. I let him know that if and when he wanted to change his room, I would help him (read: do it for him). I had a plan in place, but then he started talking about light blue! I made a couple of mockups with different wall colors to show him, and blue won — with plenty of red incorporated elsewhere. 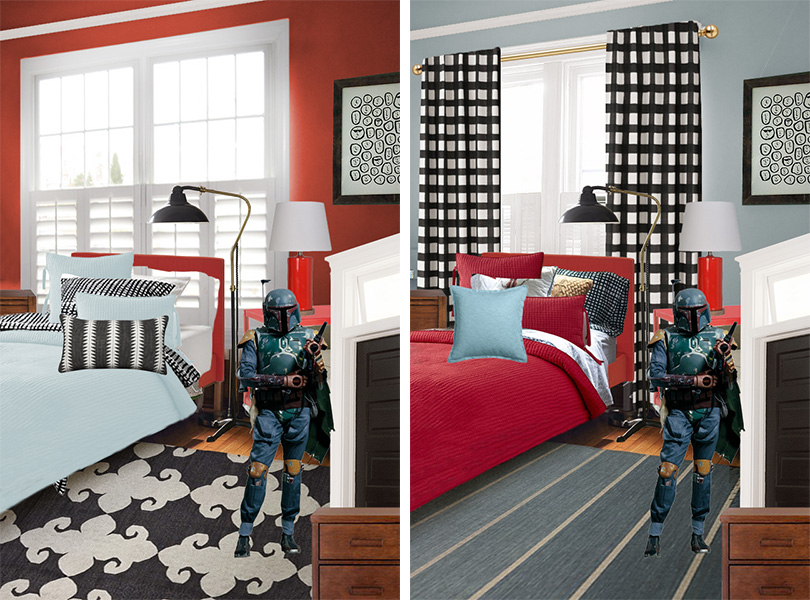 This was pretty early on in the process, so obviously some of those choices weren’t finalized and have changed. And I’m still into that black and white buffalo check, but August picked his fun colorful curtains when we were out together. Still totally cute, and I like encouraging my kids when they take an interest in their surroundings. (Someday they will probably learn to exploit this.) 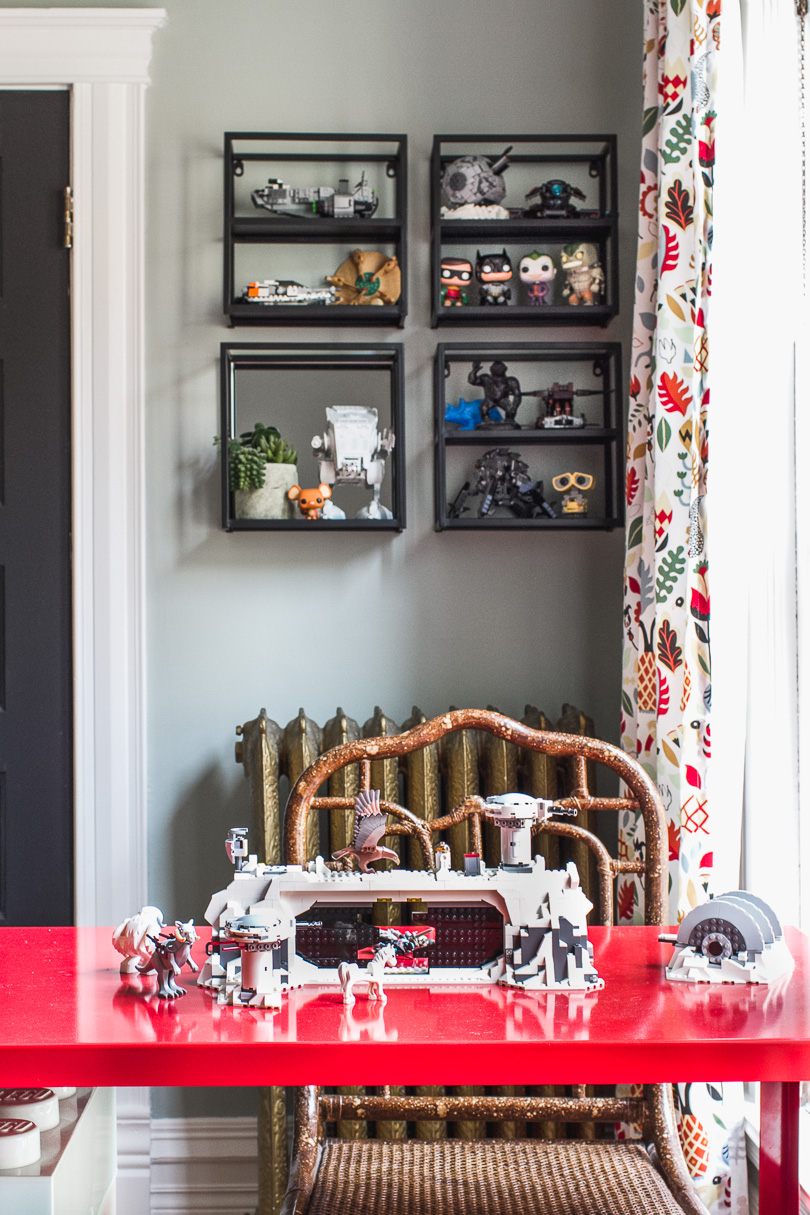 The entire shell of the room was painted, except the floor.

The ceiling had a few repaired patches from when we rewired, so it got a fresh coat of Dutch Boy® Platinum Plus Ceiling Interior Paint + Primer in Brightened Cream (005W), flat finish. I used the same color for the wood trim, but used Dutch Boy® Dura Clean™ Cabinet, Door, & Trim paint. I also used this product for the doors in Dutch Boy’s Authentic Black (437-7DB).

A quick reminder of the green walls and unpainted fir ‘before’ situation. 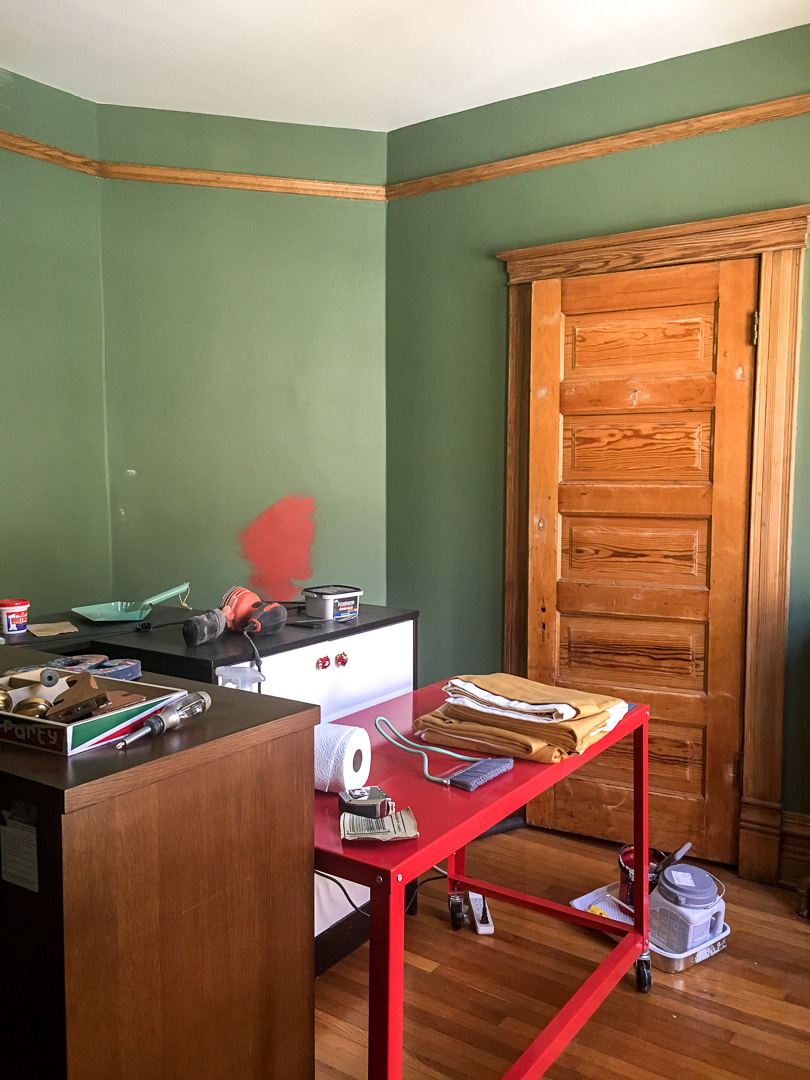 I cut in with a Purdy ClearCut Glide angled brush and rolled the walls with Purdy’s White Dove 9″ x 3/8″ roller cover. Someone had asked me for tips on painting behind a radiator without removing it. I say tape off as well as you can, use a mini roller, hope for the best, and don’t examine it too closely! 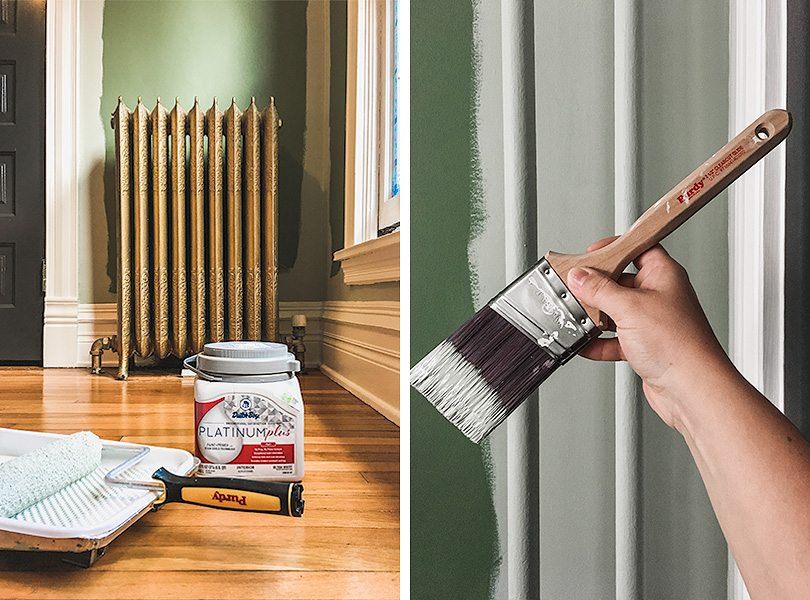 I knew the walls would be “light blue” per August’s request, but I waited to choose the exact shade until after we had picked up the bedding. I found a linen duvet cover that IKEA is calling green but that I am calling slate blue, and I chose the wall color to complement it — Dutch Boy Frosted Olive (425-2DB). I again used Dutch Boy® Platinum Plus Interior Paint + Primer in a flat finish. It has Stain-Shield Technology that allows stains to be easily wiped away, which is great for a kid’s room. I used it in our pink guest room recently too, and it’s a great paint priced around $35/gallon.

The walls are lovely, and the black door plus white trim combo gets me every time. That and the life-sized Boba Fett wall decal, of course. 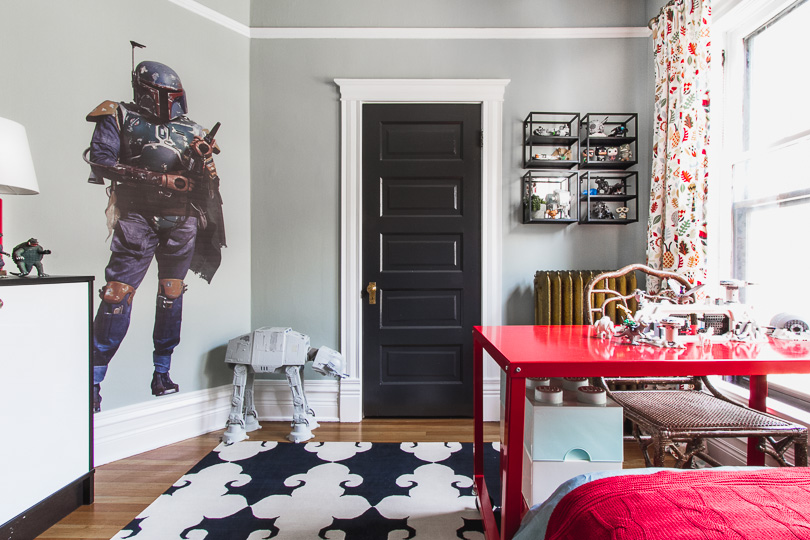 Kids often go for the really saturated, crayon-bright version of a color when you let them choose. If they want red, they want red! Blue is blue! Those vivid hues are great for a piece of furniture or in accessories, but could be overwhelming on the walls. I prefer a more muted color, and I love the way Dutch Boy has organized theirs. The color numbers that start with a ‘1’ are bright, ‘2’ is mid-tone, ‘3’ is muted, and ‘4’ is neutral. I wouldn’t consider any of the colors starting with ‘1’ for the walls — they’d be far too intense for my taste! The one I chose, Frosted Olive (425-2DB) is the perfect shifting blue/green/gray I was aiming for. Very subtle, very pretty. 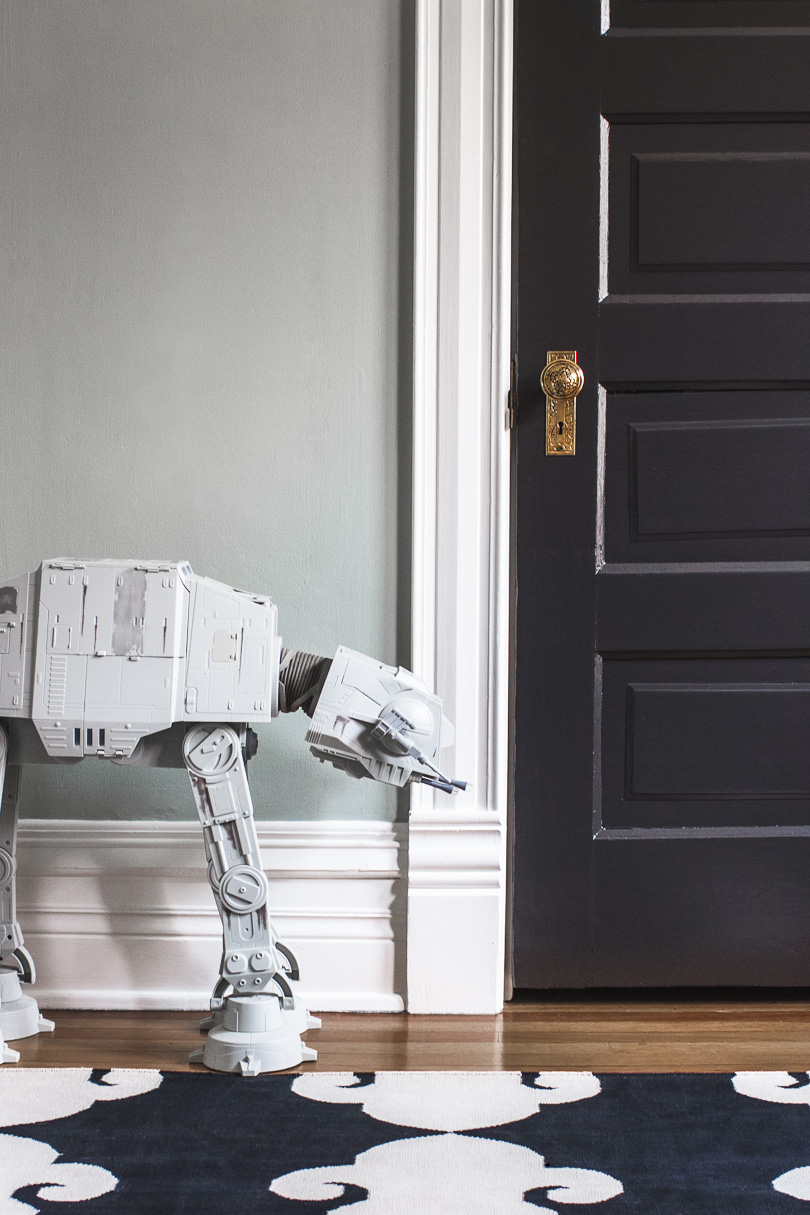 And why did I pick green when I wanted light blue? The color is on the spectrum where green and blue meet, and the room is north-facing and fairly close to the neighbors. This is not a space that’s flooded in bright sunlight, and northern light reads cooler (making everything look a little bluer). On the opposite side of the house, the “olive” in the name would definitely be more apparent. 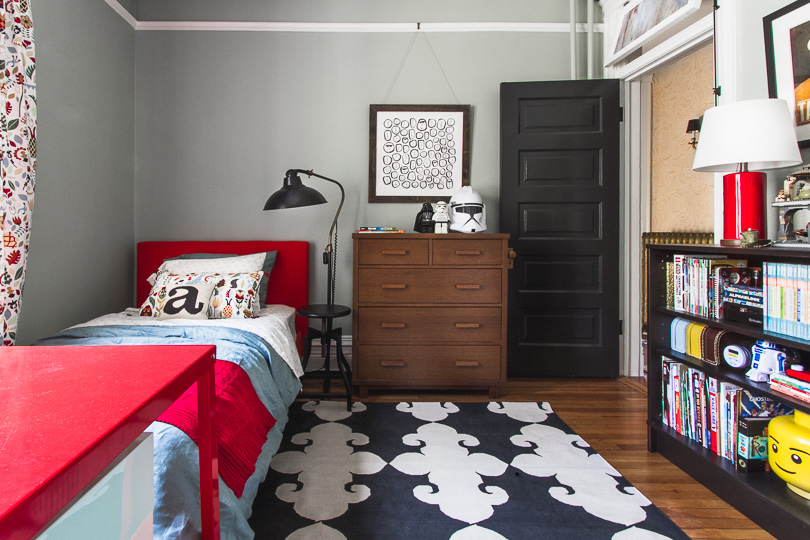 The room is about 10×10′ and has the entrance door with transom, closet door, radiator, large windows, and an angled wall to work around. August likes to build and play with LEGO models (could you tell?), so I wanted to keep his red desk in there. I had arranged the room before with the bed centered on the windows, perpendicular, with the desk in the corner. I’ve always liked the idea of a desk or dresser backed up against a bed floated in the middle of the room, but there isn’t enough space to pull it off here. I came up with this somewhat unconventional version of that layout, and it works. The desk functions like a partners desk now, with one kid sitting in the chair and another (or two) at the foot of the bed. 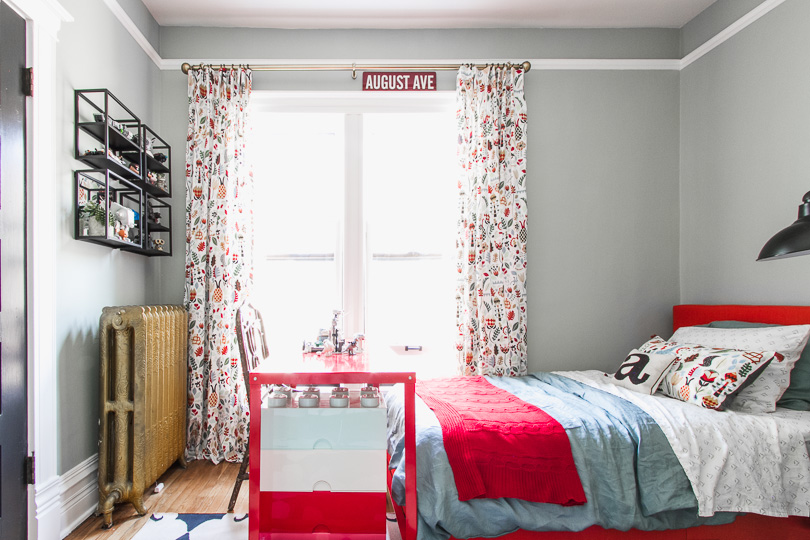 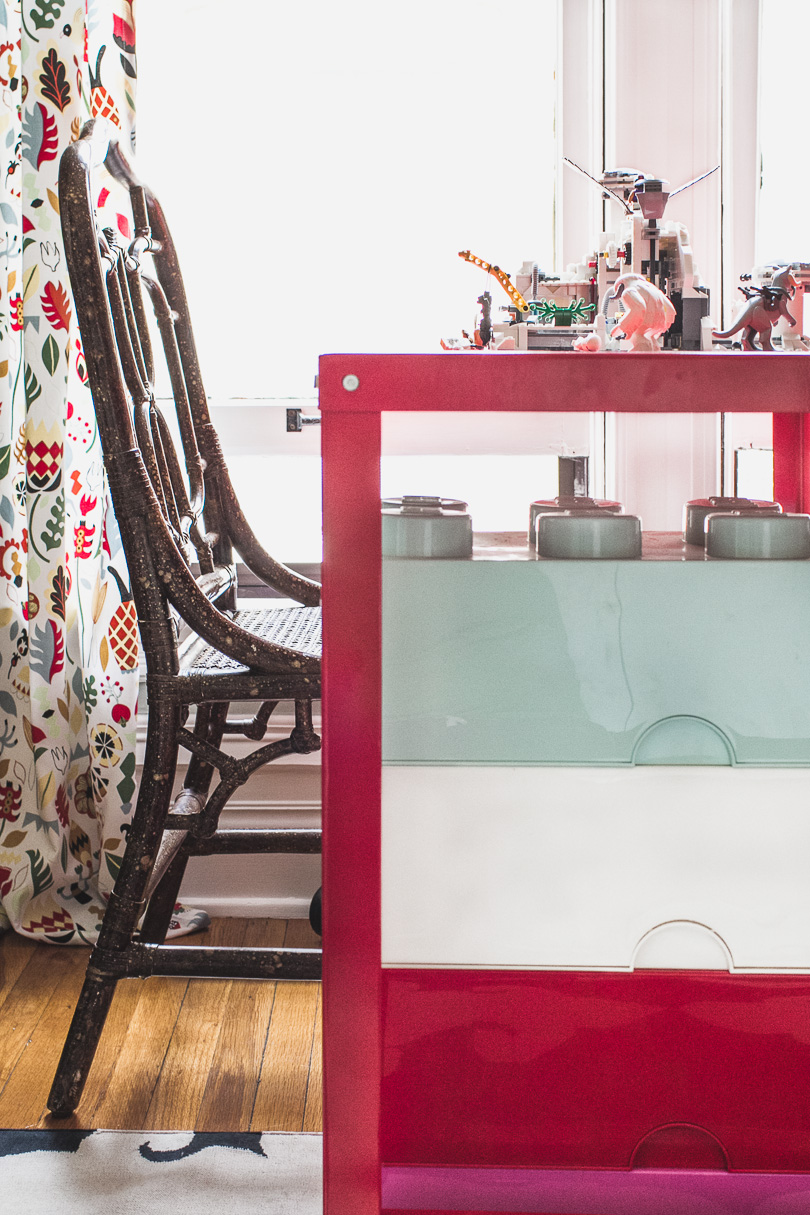 The wall behind has four wall-mounted shelves arranged in a grid (one with a mirrored back and three with double shelves) for display. Excellent for keeping certain models out of a little brother’s reach. 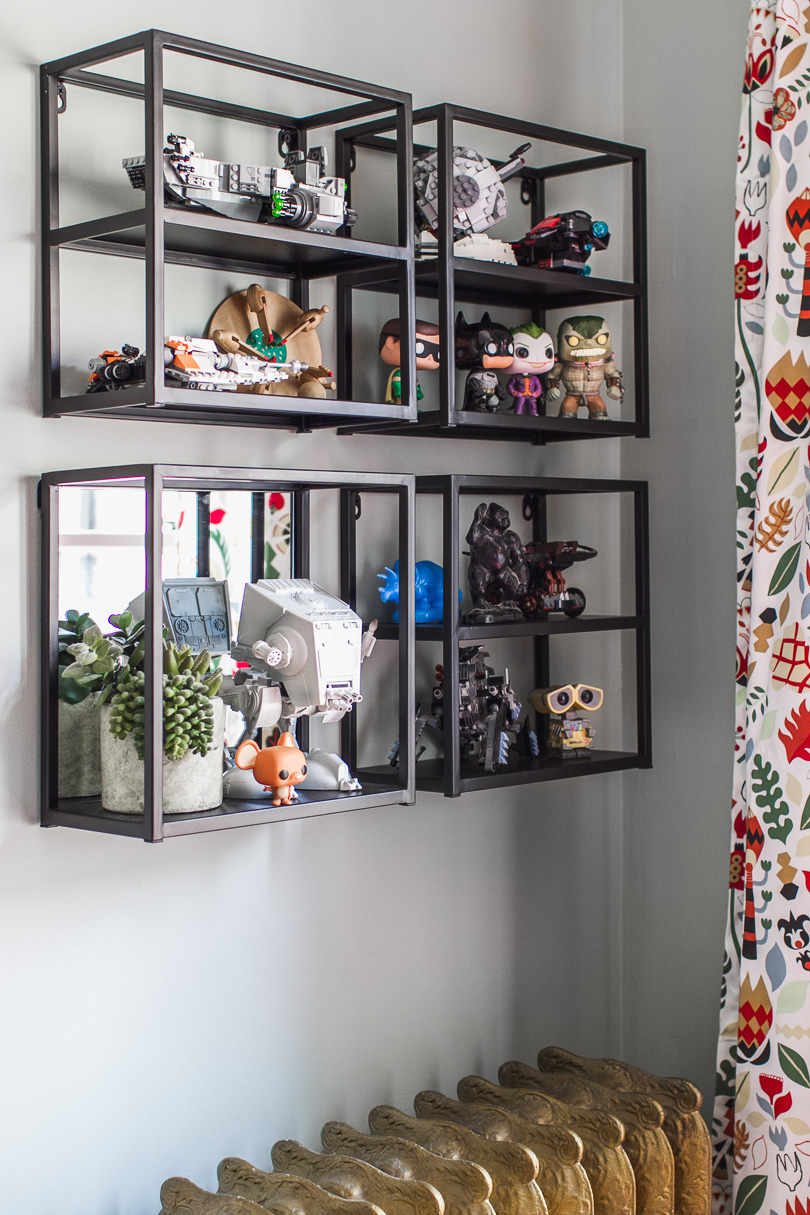 I wasn’t going for a theme room, but the kid has his preferences! Star Wars, LEGOs, superheroes, and video games. His toys are a major part of the decor. 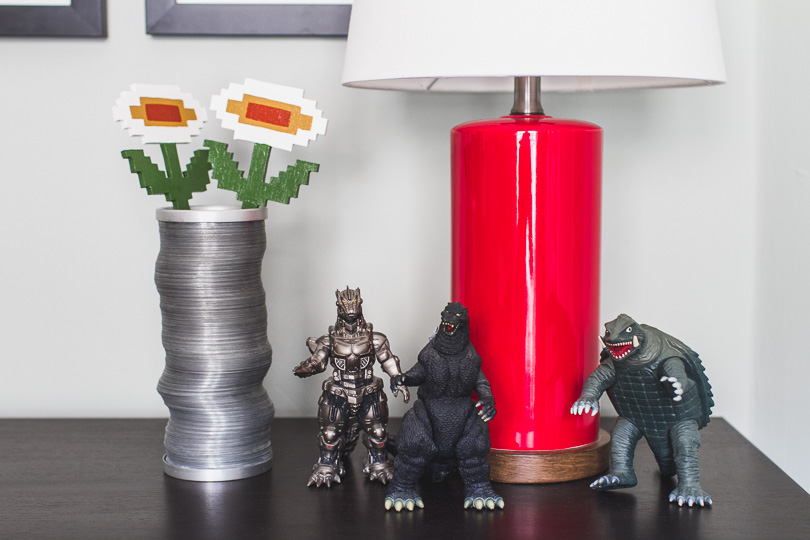 A red upholstered bed brings in more of August’s favorite color. We picked up an embroidered pillow in a print that matches the curtains, cute white sheets with triangles, and the green (blue) linen duvet set. We’ve had that little ‘a’ pillow for years, and we have other bedding that can be mixed and matched in and still go with the room. An adjustable stool that I grabbed from another room is standing in as a nightstand with a floor lamp beside it. I added a plug-in dimmer switch and looped it up to be within reach from the bed. 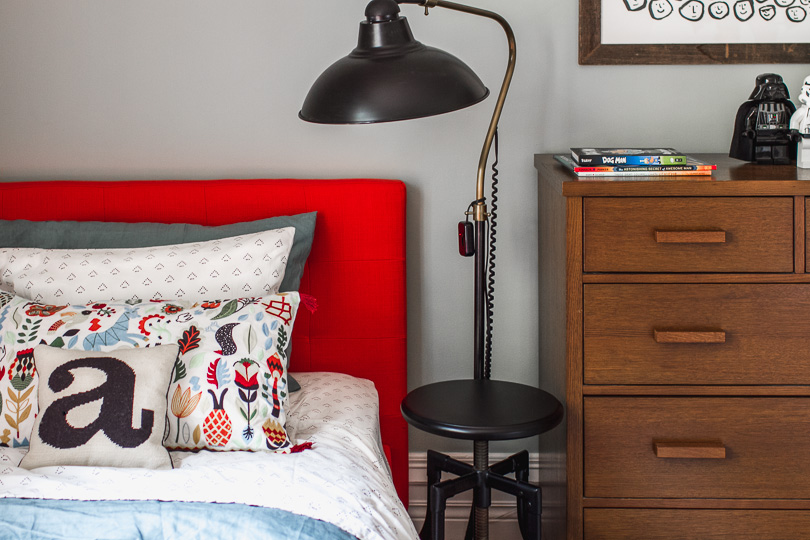 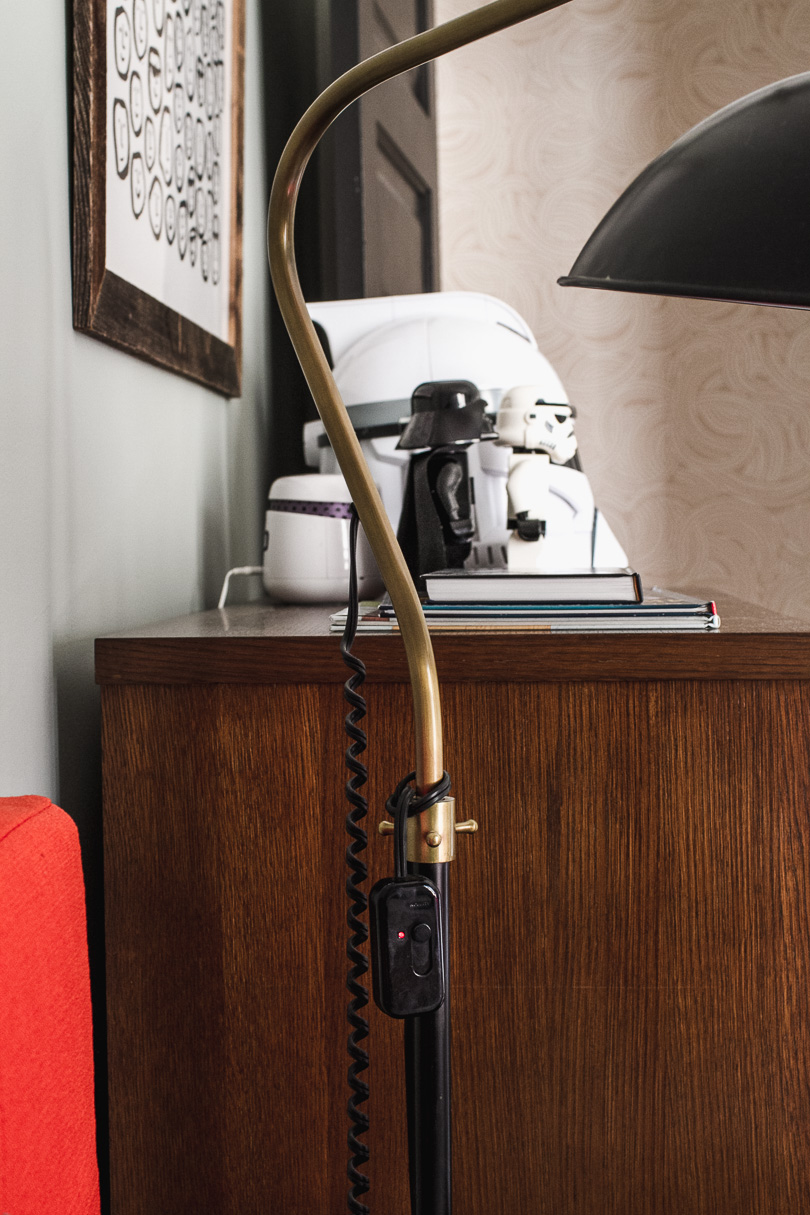 The dresser holds all of August’s clothes, freeing up the closet for toy storage. We also have some of the bulky sets behind doors in these old bookshelves we took with us from the last house. It’s a great mix of open and closed storage that keeps the room from feeling too cluttered. The books and toys are all super colorful (and not always neat, day to day), but the subtle paint color keeps it visually calm. The pair of red lamps bring more of that favorite color in, and I like the layered effect of the framed prints behind, suspended from the picture rail. 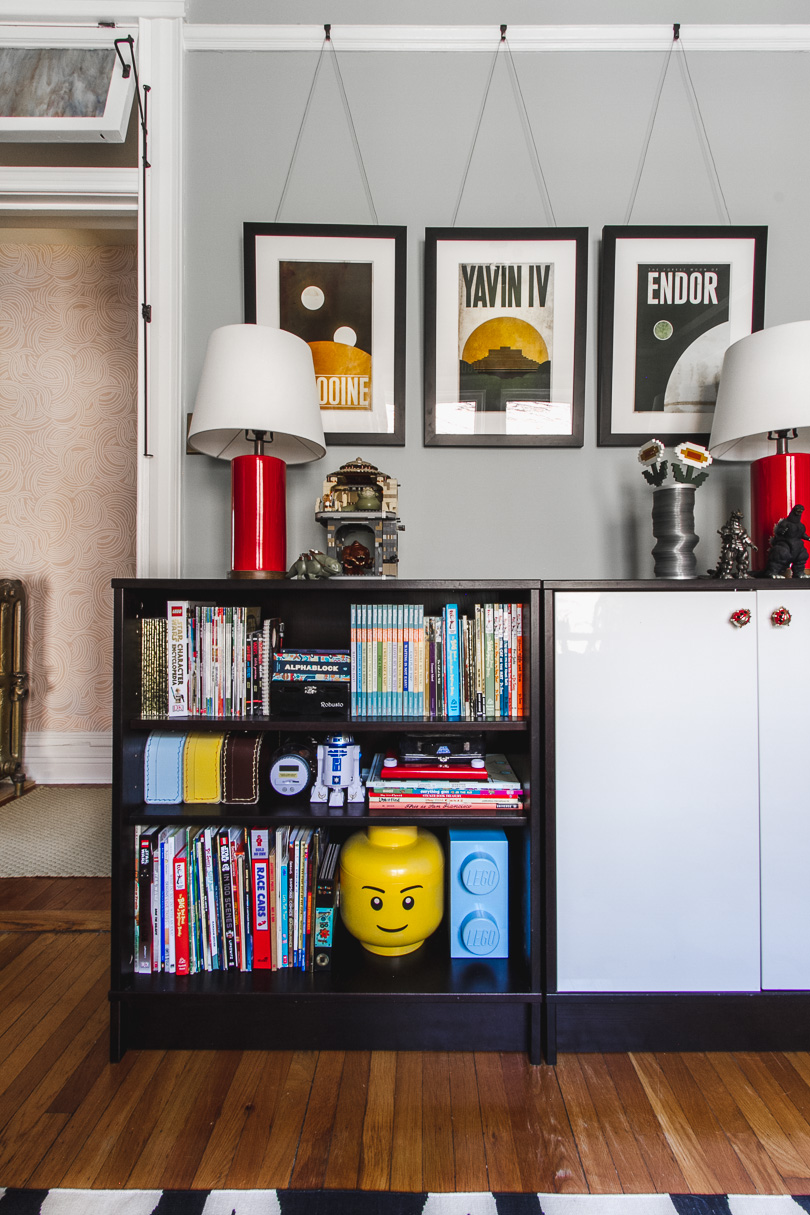 I took care to get my son’s opinions throughout the process of redoing his room. I incorporated the color scheme he wanted in a way that works within the larger context of our home. We set up areas for the way he likes to play — a large, open area in the middle to spread out, and a desk for detail-oriented work. His favorite toys are prominently displayed, and the art is guided by his interests. I want my kids to feel like their rooms are a reflection of themselves! He loves it, and what’s wonderful is that it makes me just as happy. 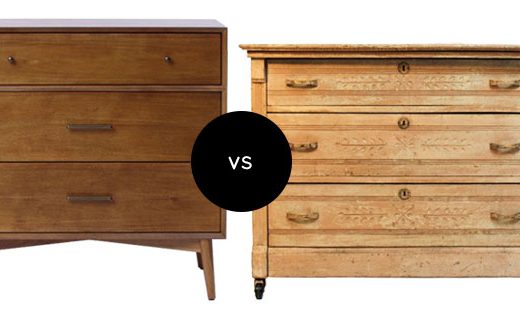 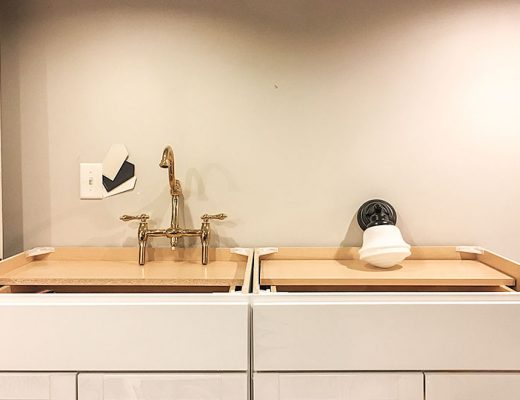 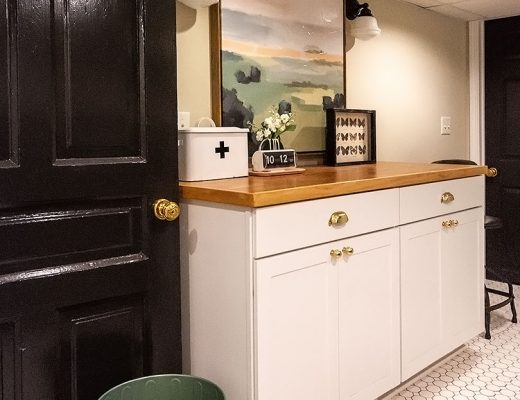