This is the second of three posts sponsored by RISE’s AND not OR home and garden program. All thoughts and opinions are my own. 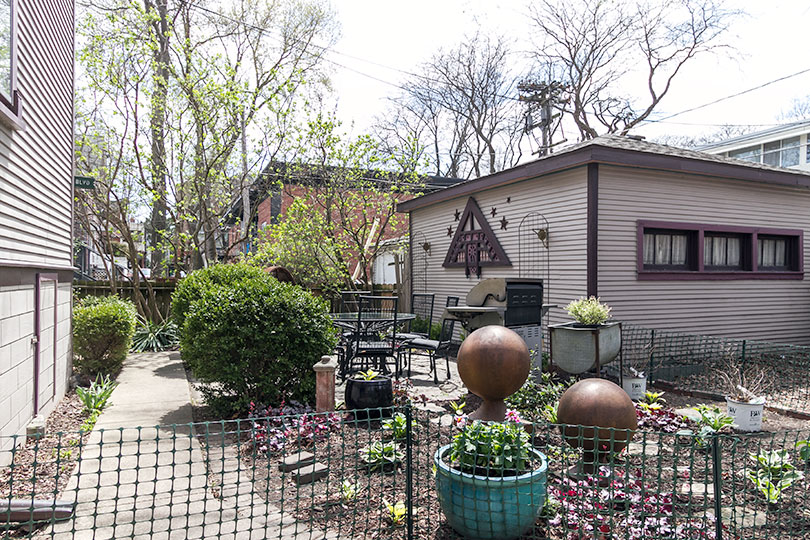 The yard is on its way! Little baby plants, all set in place and ready to do their thing. There were some existing mature plants that I liked and wanted to incorporate into the new design. The boxwoods at the entrance to the dining patio, the lilacs along the fence, and the climbing roses at each end of the garage are all lovely. I’ve added hostas, heuchera, duetzia, viburnum, boxwoods, and I have a few hydrangea waiting to go into the ground too. If you’re interested in plants and flowers that do well in the Midwest summer (and winter) check out RISE’s downloadable list. 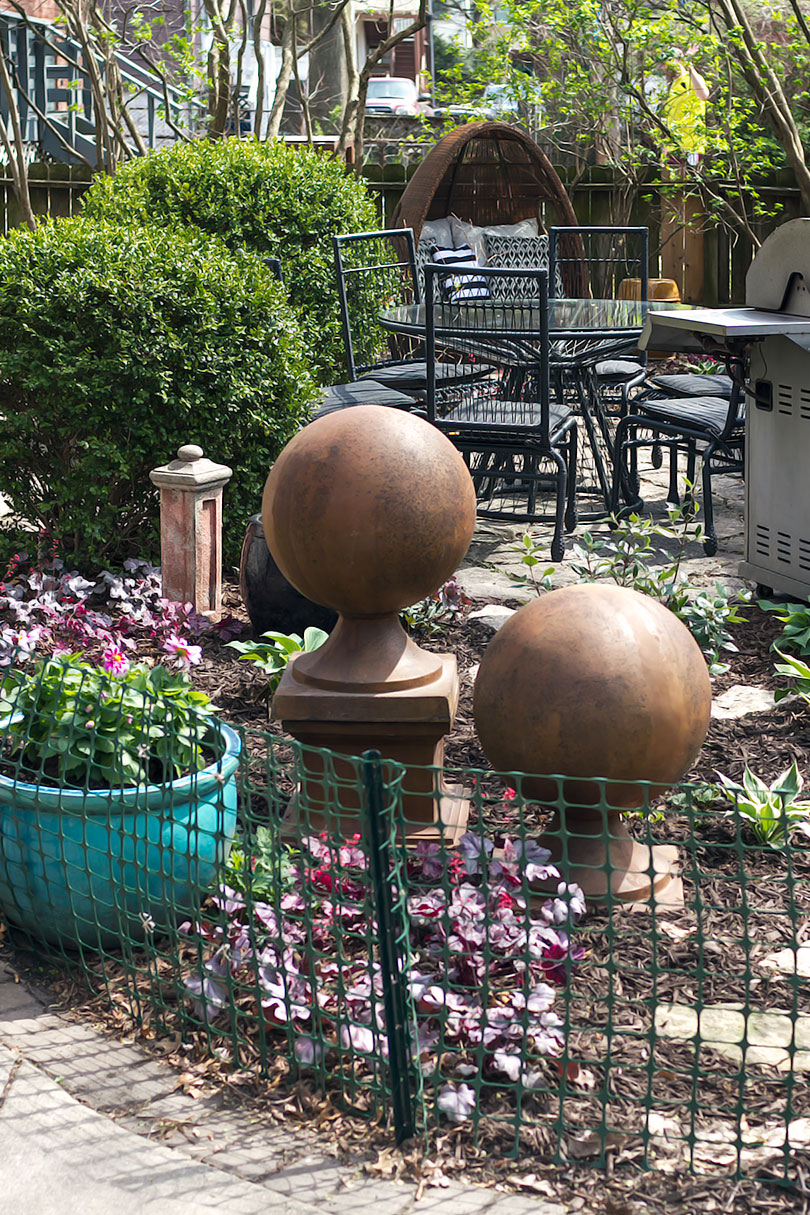 Please ignore the awful fencing! Oscar is a cute puppy, but he needs to be restricted because he loves to dig. The plastic garden fencing is only 2’ high and I’m sure the dog could jump it if he tried (especially as he gets bigger), but the combination of supervision, training, and a physical barrier has worked so far. If we only need it temporarily, great! If it’s going to be long-term, I’ll find a more attractive option.

Let’s talk about the roses though — whoops. I cut them waaay down to the ground years ago, and they’re just now starting to halfway resemble their former glory. I didn’t know what I was doing before! I mean, I still don’t sometimes, but I’ve learned a lot. I did a ton of research on climbing roses a couple of years ago. 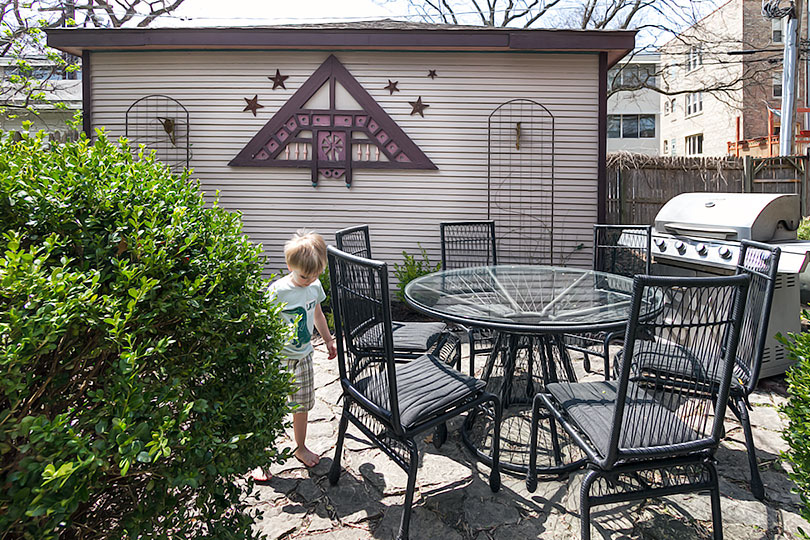 The old rose trellises were falling apart. When I took them down, the paint behind them was cracked and flaking, so that wall of the garage was scraped, prepped, and painted last week. The new trellises are more visually delicate than the old ones, but they seem sturdy and will hopefully last. Roses can be a bit temperamental, so I fertilized them with a product that also prevents pests. I’m training the canes back and forth in a winding S-shape (new, flowering shoots only grow off of horizontal canes), and I planted clematis that should make its way around the roses, blooming earlier for more seasonal interest. 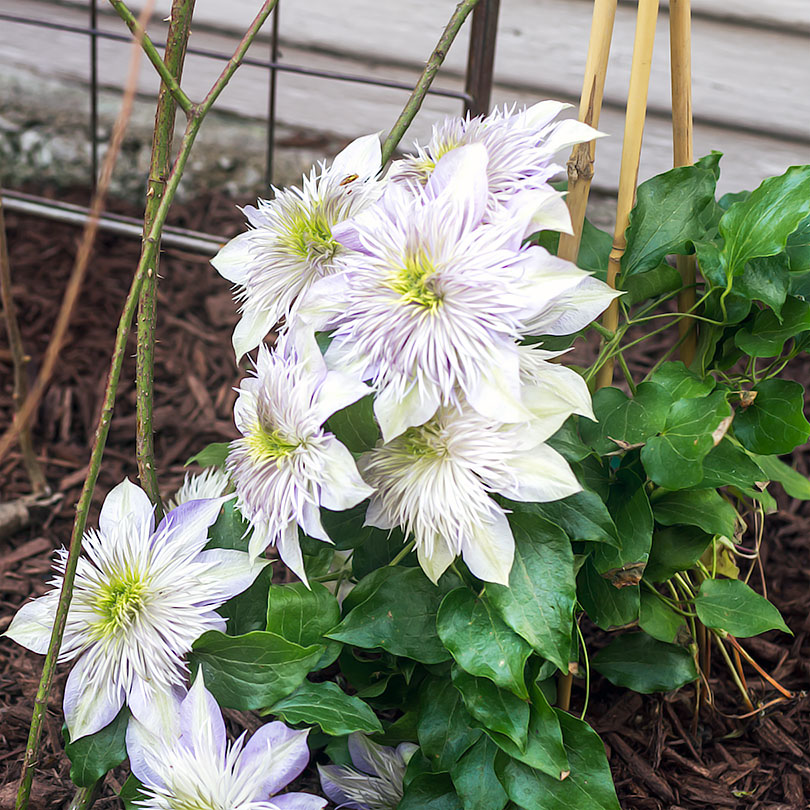 There was snow on the ground not long ago, so all of this came together over the last couple of weeks. (Also, an update on my hand — I sprained it, but it will be fine!). 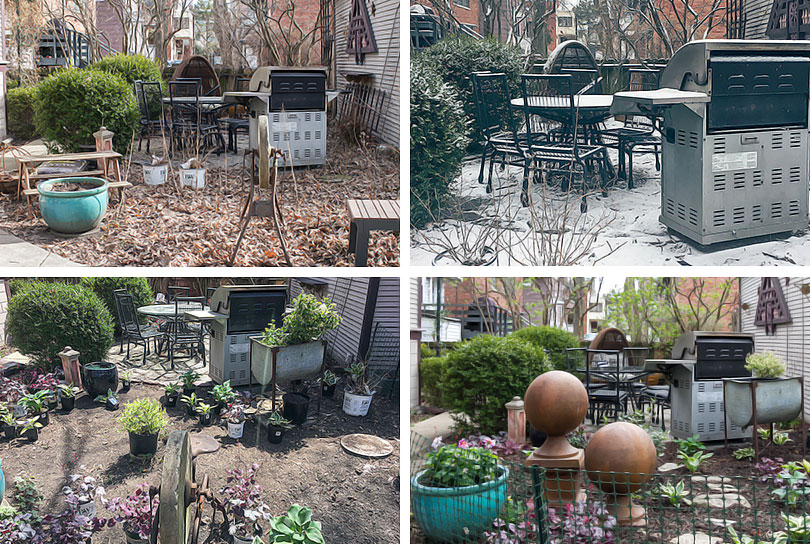 Those giant ball finials are weird in a good way, right? I needed something grand in scale since it’s going to be years before any of the new bushes (very excited about the Mohawk Viburnum!) reach their mature sizes. Itty bitty baby plants are cute, but the eye goes right past ’em. I considered a more modern geometric sculpture, but liked the idea of something with age (or at least the look of it). I also relocated a metal tub planter from a different part of the yard to somewhat hide the back of the barbecue. 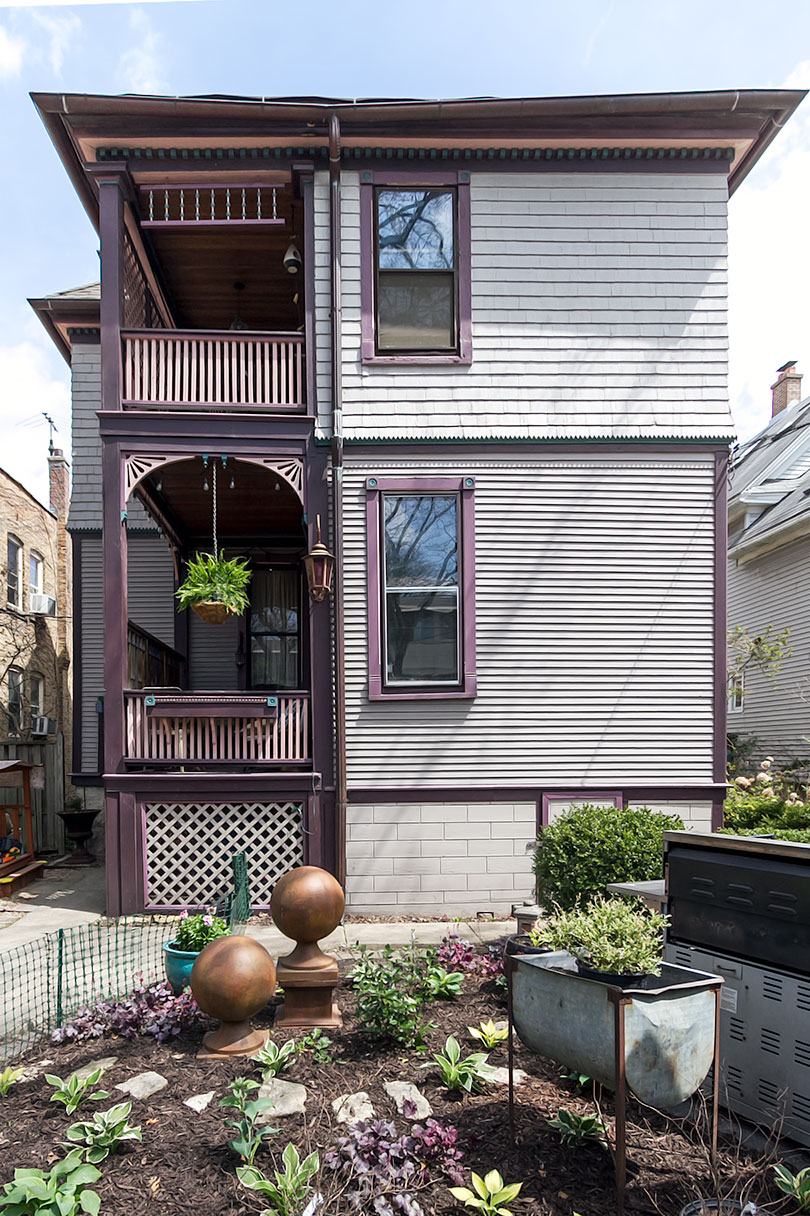 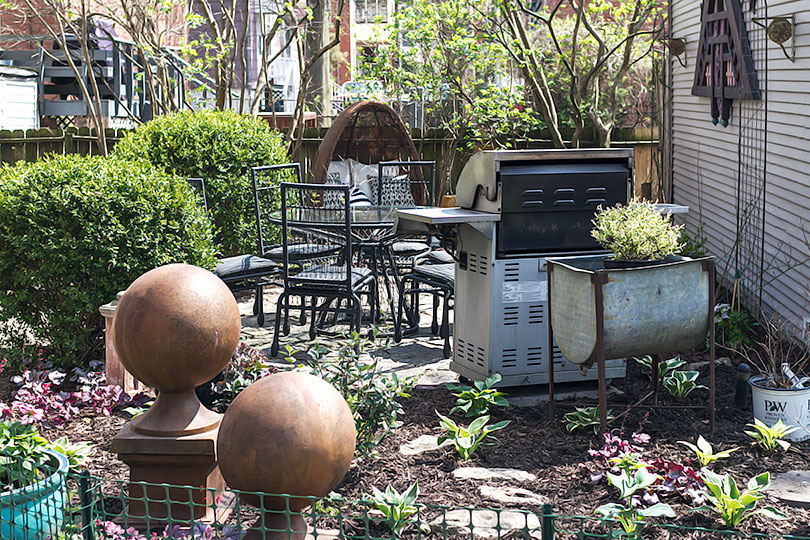 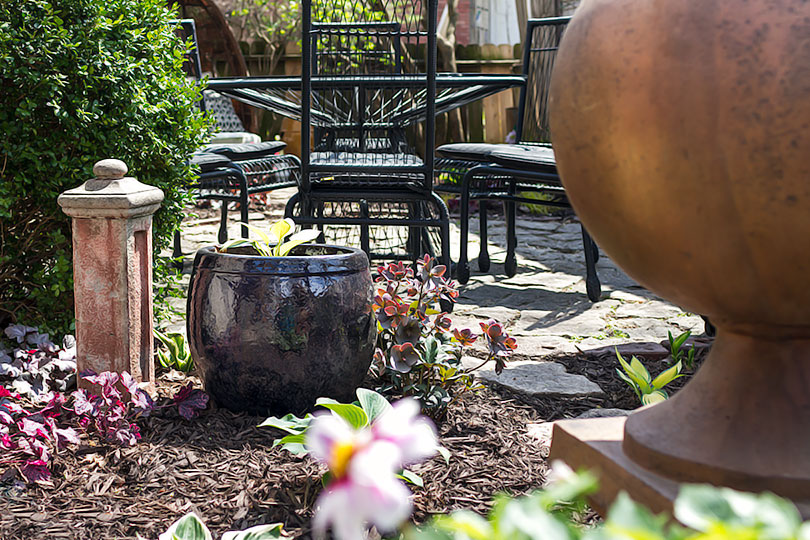 I added plenty of mulch everywhere after getting the plants in the ground. I’ve gone through all of the effort to weed an area before, pulling things out by the roots or using weed-killer for things like poison ivy, and if you leave that soil bare for even a little while, new weeds come back so quickly. Mulch prevents weeds, keeps moisture in the soil, decomposes and improves the soil, and helps plants survive the winter. Magic stuff! Messy, heavy, and requiring a few trips when you need as much as I did, but magic stuff nonetheless.

The AND not OR approach to gardening is all about finding that balance of what works for you. I like the big initial spring clean-up because it’s nice to be outside in the sun after a Chicago winter, but the weather tips into hot and humid pretty quickly and then it’s not so fun. Getting rid of the weeds that were already out there now and preventing new ones with mulch will make upkeep much quicker and easier. 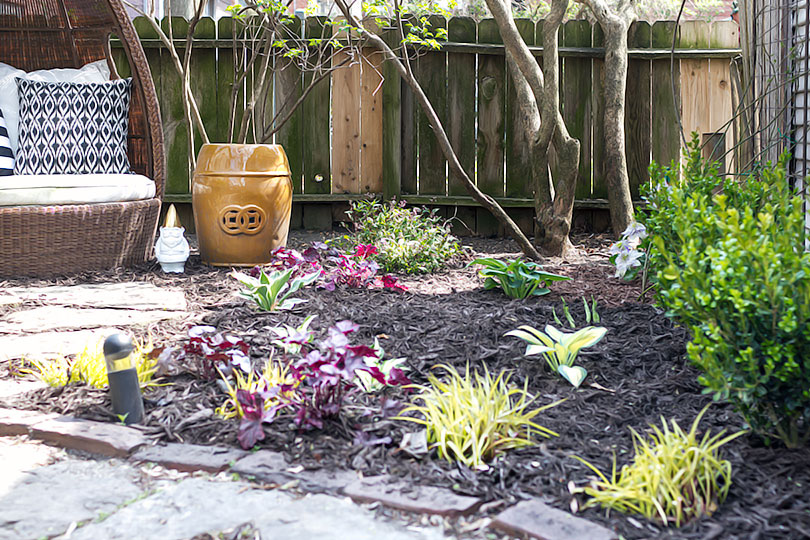 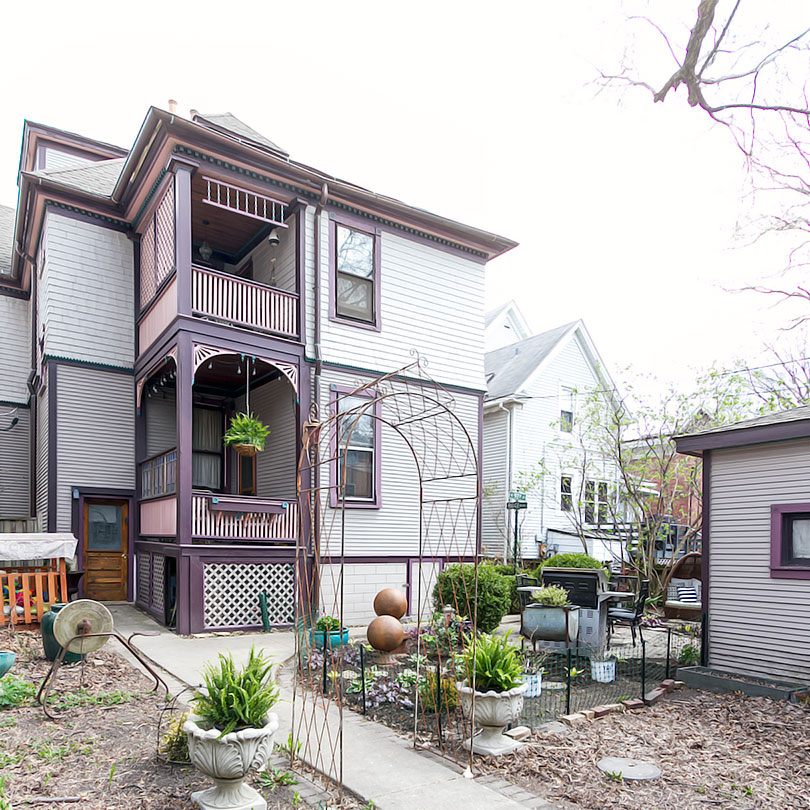 Gardens are always a work in progress, but that’s especially true of this one right now. I’m going to add a hedge (yew or boxwood) to more formally separate the front and back half of the backyard, and the arch needs something to grow over it. I think I’ll pick up a pair of pedestals for the urns to give them a bit more height, and the flower box on the back porch railing will be filled. Imagine those changes with mature plantings and leaves on the trees — like so. 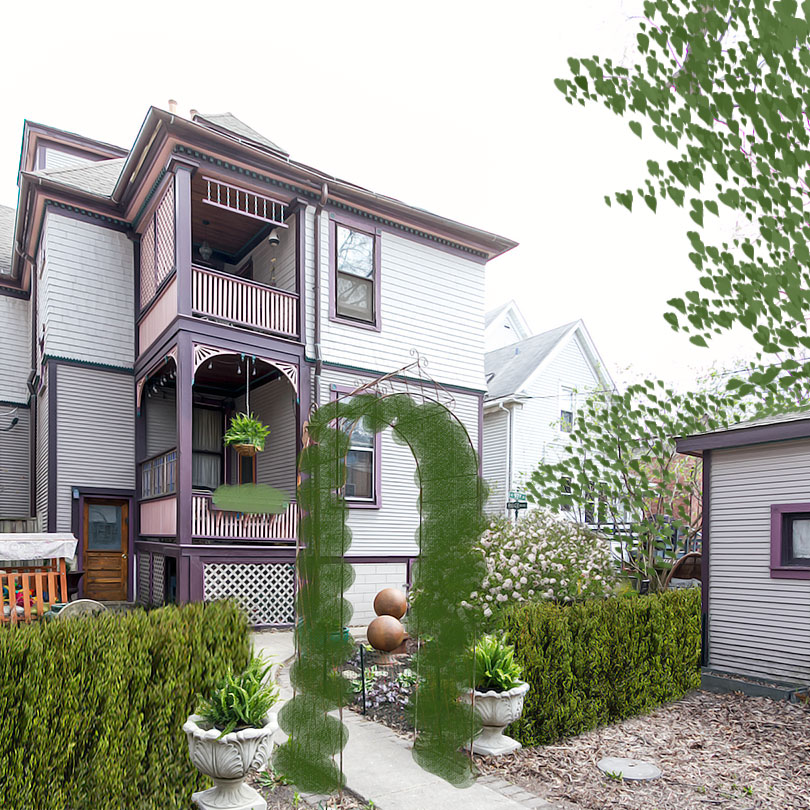 You see it, right? We’re also planning for a new fence this year. The section behind the egg chair is in decent enough shape, but it’s shot pretty much everywhere else. 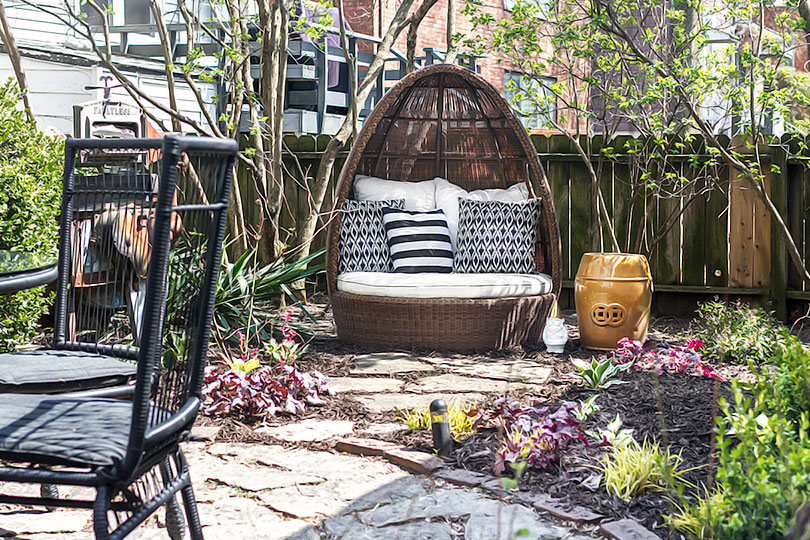 Our egg chair is still a big hit with the kids! It’s “all-weather wicker” (plastic), and it has held up beautifully. It’s tucked away and as the lilacs leaf out and bloom and the new deutzia I planted to the right of the garden stool grows, this area should have a kind of magical secret garden vibe. I’d like to add flowers along the fence too, but that will have to wait until after it gets replaced. 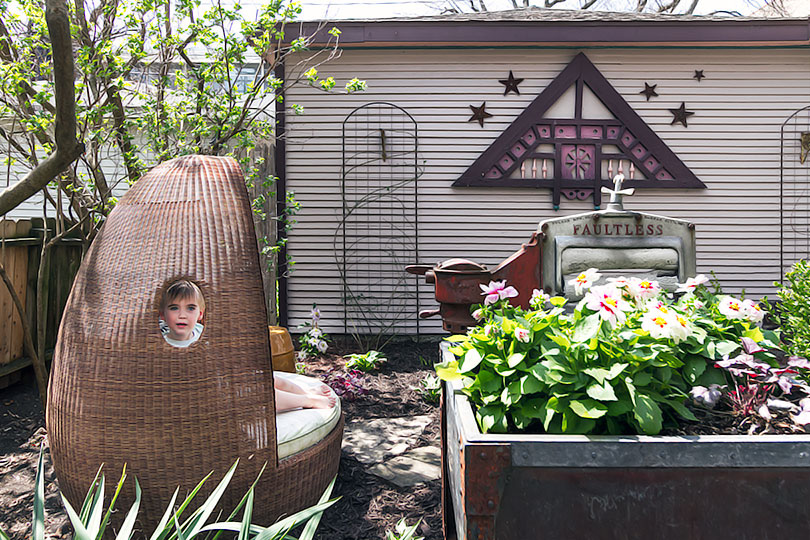 There are dahlias and a heuchera in the washing tub, and I’ll add sweet potato vines once the nurseries have them available. This photo from a couple of years ago shows the same angle, further on in the season. I love the softness of the trailing leaves.

The trees are only now beginning to bud and I’m hopeful that the hostas and heuchera will take nicely, so the garden is going to be more lush and leafy soon! It already feels like a much nicer place to be. And if you have any tips for keeping the puppy from undoing all of my hard work, I’d be glad to hear them! 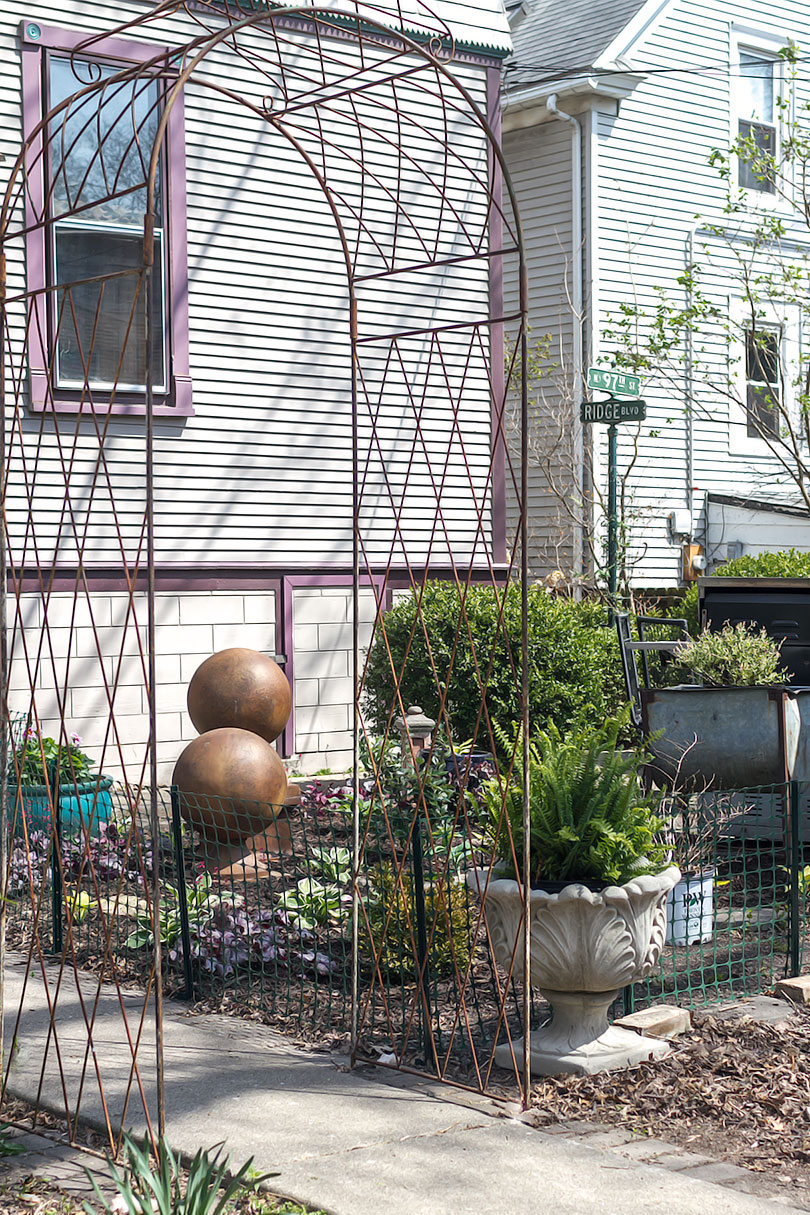 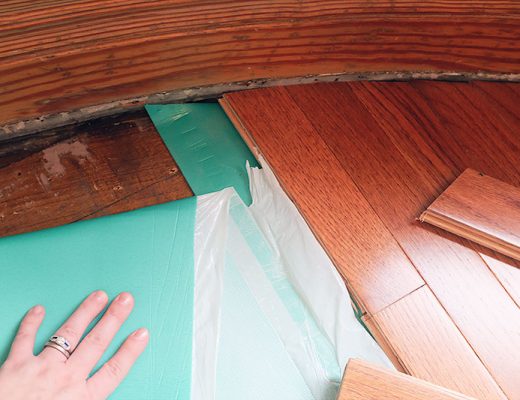 The Next Few Days 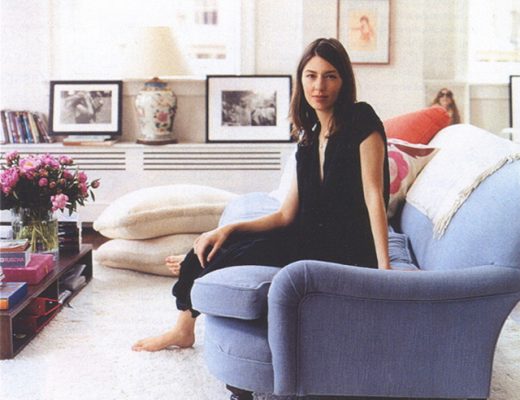 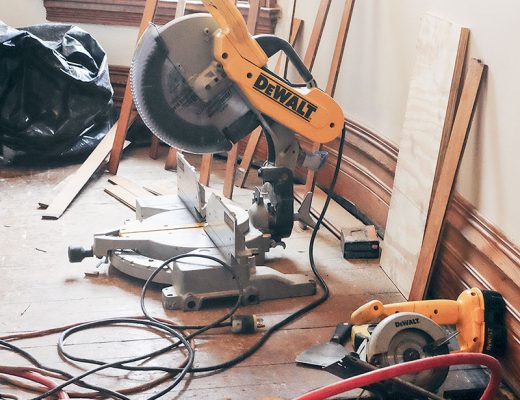