We don’t have a family room, or a den, or a finished basement. We do have a living room, and we do most of our living in that room (haha), and that includes watching television. The floor plan is a little limiting – there is really only one spot where the TV can go and only one wall where the sofa can fit, so they’re opposite each other. It works just fine. If I’m going to be facing the TV even when it’s off though, I want it to look as nice as it can. 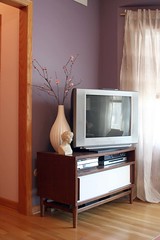 Here it is in the old apartment too (photo on the right). Pretty similar. After I posted that photo, Holly from decor8 said that has the same TV and the same stand (from west elm)! Pretty funny.

I was glad that it fit so well in the new house because I really do like it a lot. We have a gazillion video game consoles that I just can’t stand looking at all the time (you can see the Playstation 2 above the DVD player there, but there are 3 more systems behind the doors). The stand we had before was from IKEA, and it was all open.

What do you do with your TV? Is it behind closed doors? I like it when people do that, but I don’t think it works for all spaces. I know in my home, it would be a big hulking piece of furniture (and everyone would know the TV was in there anyway!). 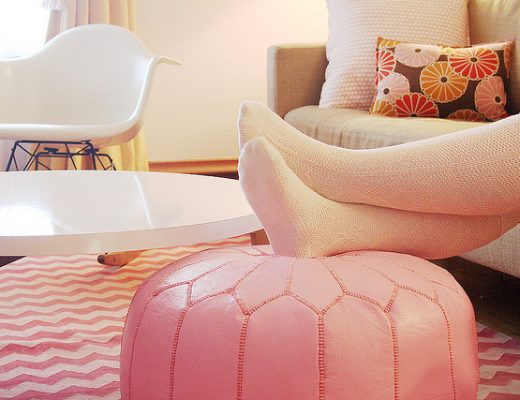 The Bench I Want