I’m still enjoying my maternity leave, though I’m eager to open the shop again too. Now that Eleanor is getting used to being in a sling, I can get more done during the day but it’s not consistent at all. Some days she takes a nice long nap (or two), sometimes it’s just 20 minutes here and there. 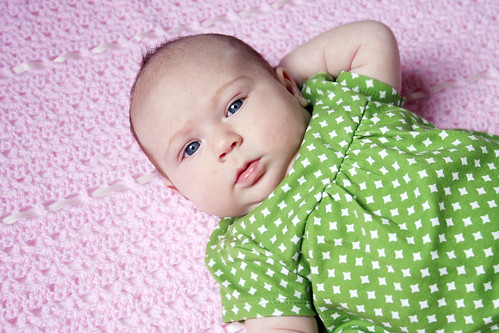 Although Eleanor doesn’t nap much, she’s doing remarkably well at sleeping through the night! I start her bedtime routine around 8:00 and on a good night she’s asleep by 8:30. If she’s fussing a bit it might take an hour or more for her to finally fall asleep, but once she’s asleep she’s often out for the night. I always get one of two variations… she sleeps straight through from 8:30-5:30, or she sleeps from 8:30-3:00, nurses, and then sleeps again from 3:30-7:00. Either way, I get a decent night’s sleep so I’m happy. 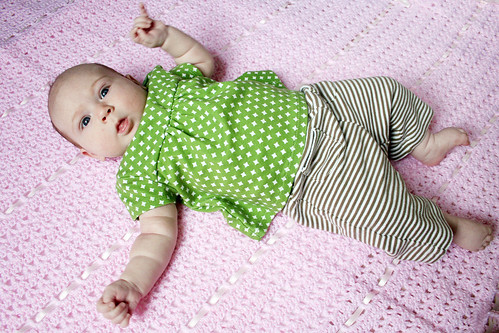 Eleanor plays with her hair now to soothe herself when she’s tired. We first noticed her doing it a couple of weeks ago. It’s cute to watch her do something so deliberate! I feel like we’re getting a peek at her burgeoning personality. And she’s always been very alert, but now she’s becoming more curious too. She loves to be in her bouncy chair or on her play mat so that she can bat at her toys. She makes little cooing noises as she explores. 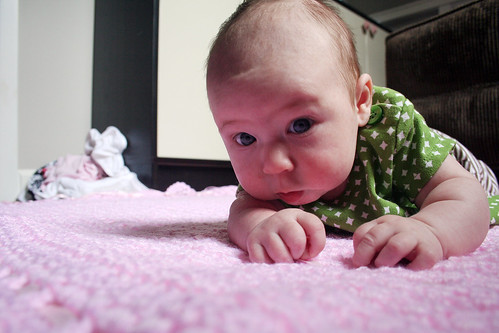 And she smiles! It melts me a little each time and of course I give her one right back. She’s even started laughing… well, it’s more like the precursor to actual laughing. Practice giggles. It’s not the squealing baby laugh you might think of, but more of an abrupt breathy sort of thing accompanied by a beaming smile.

Lately though, Eleanor has been crying for Brandon when he holds her. She calms down right away when she’s back in my arms. It’s way too early for her to be experiencing separation anxiety and we don’t know why it’s happening, but it’s heartbreaking. She smiles at Brandon, but it seems she just doesn’t want to be held by him. 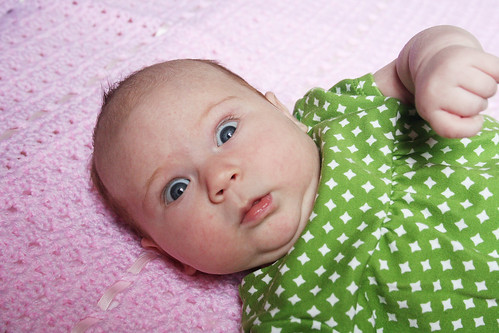 When she was three weeks old, I mentioned that I was having a hard time with breastfeeding. I’m happy to say that things have finally improved! I was feeling discouraged when I was still in pain at six weeks because even though I now there’s no magic time frame, I kept hearing “give it six weeks”. I had taken a breastfeeding class, seen lactation consultants, read books, applied lanolin religiously, kept soothies in the fridge, varied positions, carefully latched the baby on… I was doing everything right and I was still in so much pain.

The left side had actually felt better since around the fourth week, but the right side was awful. There was some damage early on (probably by the third day), and it seemed like it would never heal. I dreaded each feeding because even if it was the side that didn’t hurt, that meant I was just that much closer to nursing her on the painful side again. Well I don’t know what changed, but all of a sudden one day nursing didn’t hurt anymore! Maybe Eleanor finally grew into her high palate, or maybe she changed the way she latches on? All I can say to someone having the same difficulty is that it does get better (even though I was afraid for a while that it never would). 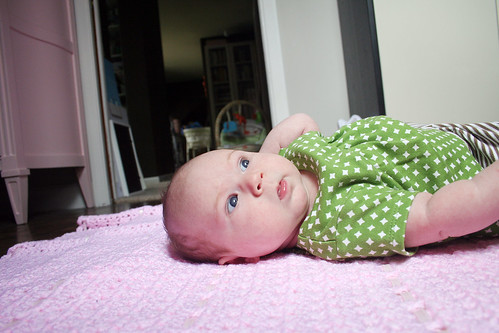 Oh, and our little girl is quite the chunker. At her one month check-up, she weighed 12 pounds! That’s off the charts. Now she’s already outgrowing her 0-3 month clothes. She’s getting so big so fast. 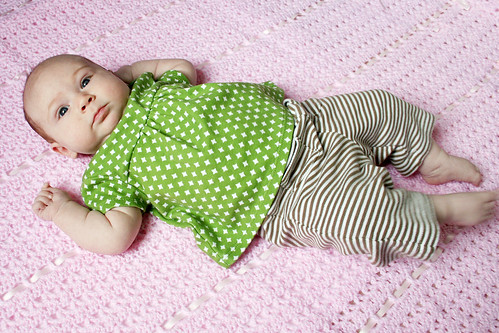 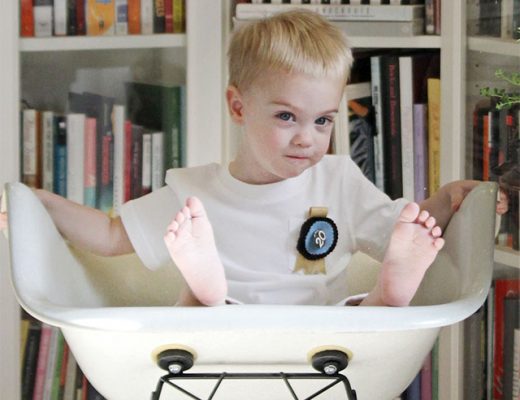 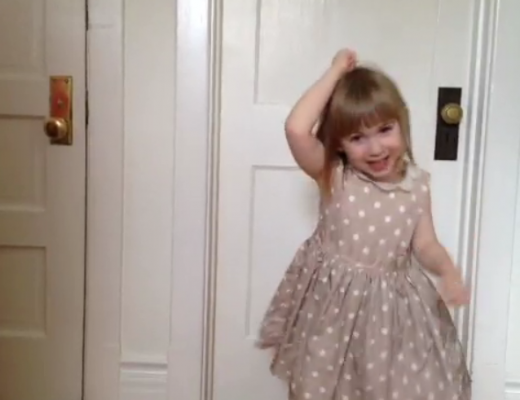