MiY 6d: Texture and Pattern in the Dining Room

We haven’t checked in on our fictional sisters Ann and Lia lately. A little refresher may be in order, yes? We’re following the Napa Dining Table as it is passed down from Ann to Lia as part of my Making it Yours (MiY) series, and seeing how it fares through several style changes.

First Ann had it in her modern country dining room, and then her tastes ran toward the more traditional. Later, she passed the table down to her little sister Lia, who didn’t have much money but made the table work for her quirky and colorful style. Now Lia has been moving up the ranks at work, and she wanted to change up her dining room a bit. Let’s see what she’s come up with… 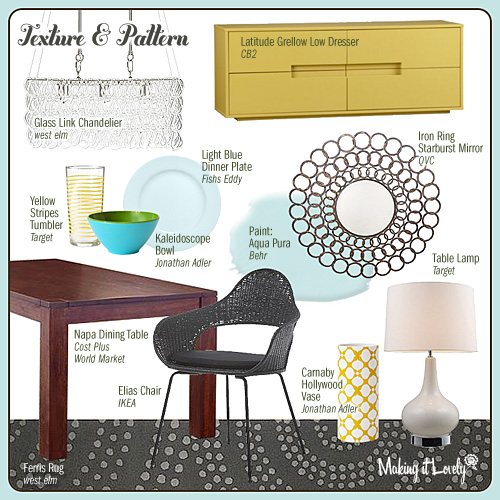 The wall color has stayed the same aqua blue, and she has kept her glasses and bowls plus some new light blue plates. The dresser (being used as a credenza) that she painted to look like the latitude grellow dresser has stayed as well. Lia toned down the crazy mishmash of colors though and is instead focusing more on adding interest through texture and pattern. The cool glass link chandelier and smooth white lamp contrast nicely with her new woven chairs. The iron ring starburst mirror plays off of the circles in the rug, and the yellow patterned vase relates back to the dresser. There’s a ton of texture and pattern here, but the overall look works really well without going too over the top.

We’ll see one more look from Lia as we finish this edition of Making it Yours. What direction should she go in next? 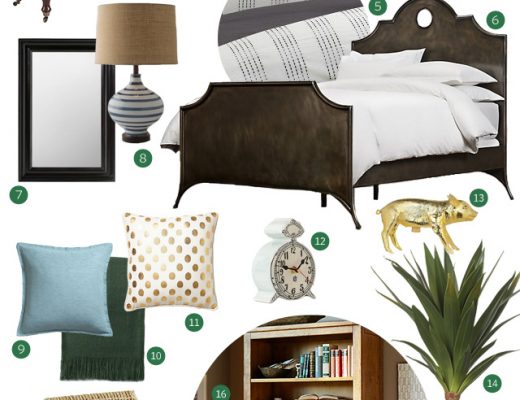