A Dollhouse Made Lovely 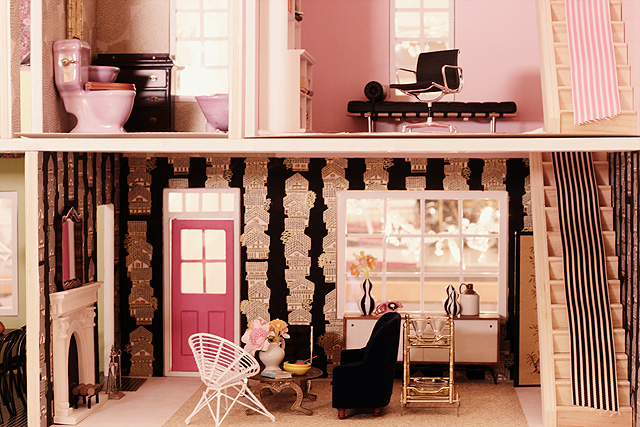 Well, I think I’m the only one that actually has a dollhouse to show you today from Emily’s original group of participants. I’m amazed though by the creativity and hard work that was put into dollhouses by the people following along with this whole crazy project! (Thank you, everybody.) Here are some of the people I’ve noticed, but please leave a link in the comments if I missed you.

I’ve been working on a Walton dollhouse, courtesy of Melissa and Doug. It’s been fun to follow along with this challenge, but I’ve really been making it for Eleanor. She loves it already, even though she’s a little young for it at just two years old. I hope she’ll enjoy it for years to come. I’ve tried to source things below but unless otherwise noted, you can assume everything came from eBay. Here’s a closer look inside…

The Kitchen and Dining Room

I bought a kitchen set and only intended to use the stove and fridge from it, but I ran out of time and just used the sink that came with it as well. I have a farmhouse sink that’s really cute, but it needs to be assembled. I’d also like to eventually make some cabinets and counters, sew a little skirt for the sink, and put up a backsplash. The dining wall also needs some large art, and a table! I rested a gift box lid on those little metal chairs. The light is a knob that I’ve had for years from Anthropologie, and the table settings and food all belonged to Brandon’s mom and grandmother. The paint color is Dill Pickle by Benjamin Moore. 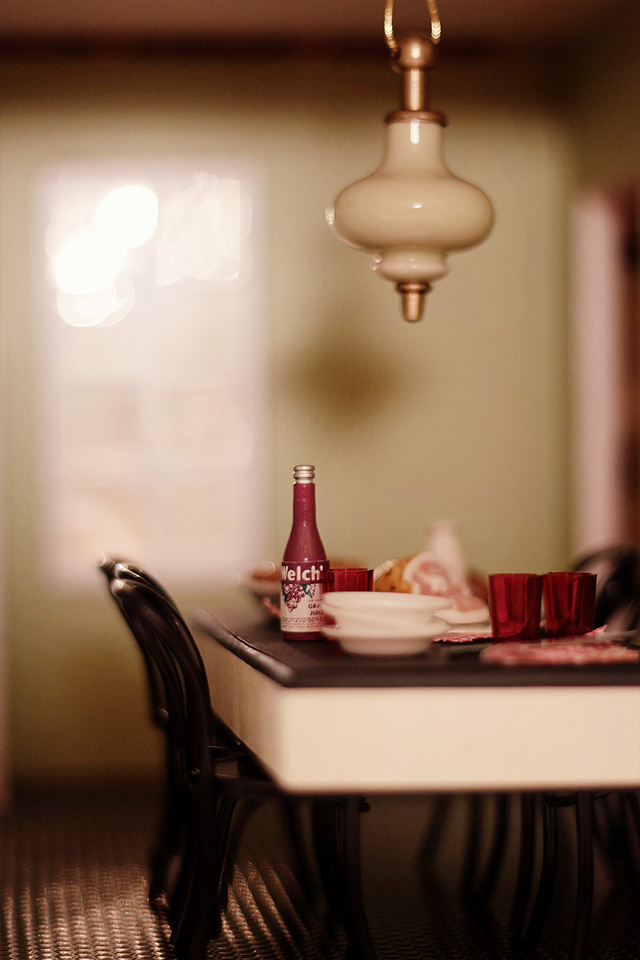 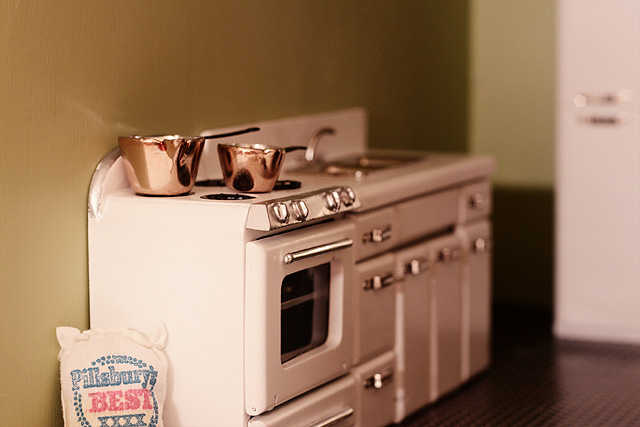 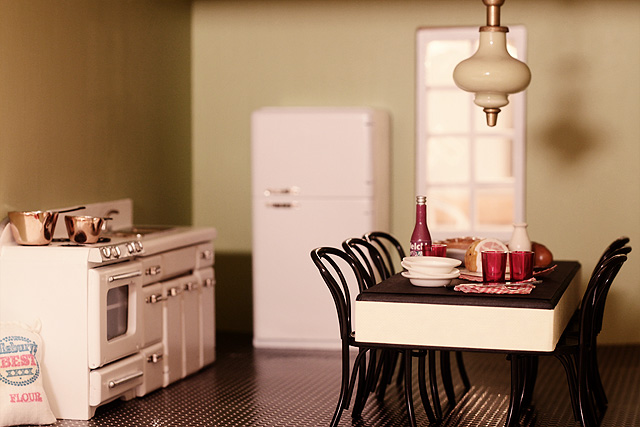 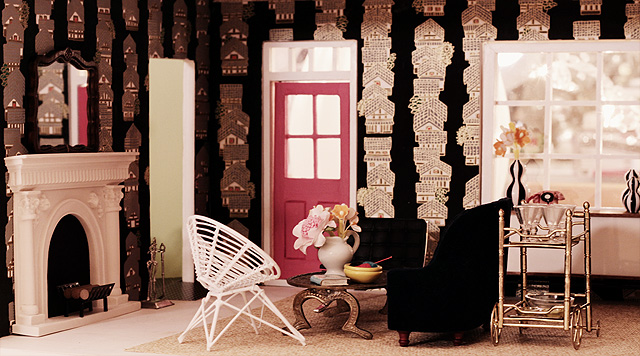 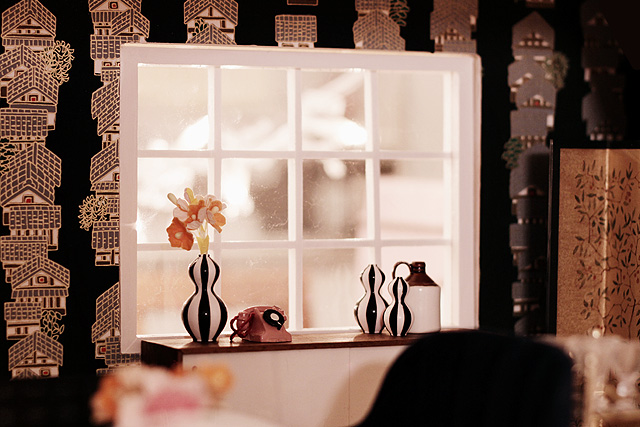 The tiny Jonathan Adler vases are from the Adler Barbie couch set we already owned for me Eleanor. The credenza is awesome and handmade, from OneFortyThree. It was my big furniture splurge in the dollhouse. The white wire chair is an ornament from CB2, and I already owned the mini Barcelona chair. The tea cart was a gift from Cassandra (thanks!). The gold folding screen and little accessories belonged to Brandon’s mom and grandmother. 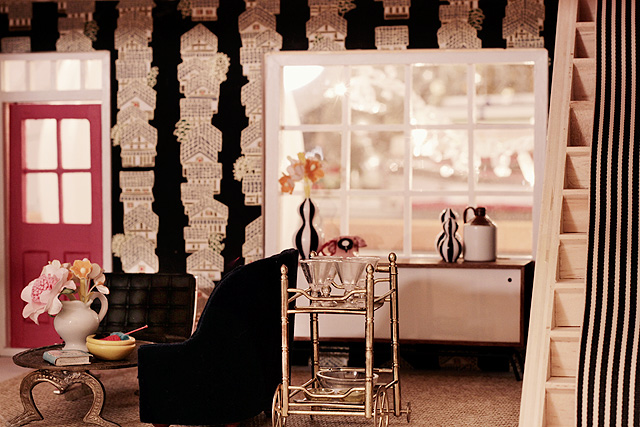 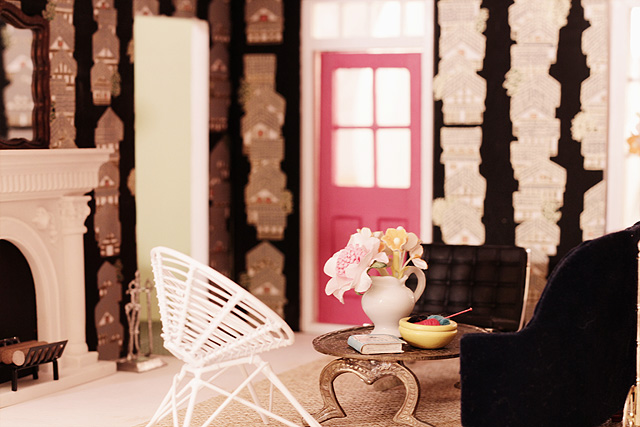 The wallpaper is one of my favorite things in the house. Tiny houses! I also had some amazing wooden flooring to go in the room, but it’s going to be labor intensive, so I left it white with a sheet of woven scrapbook paper as a rug. 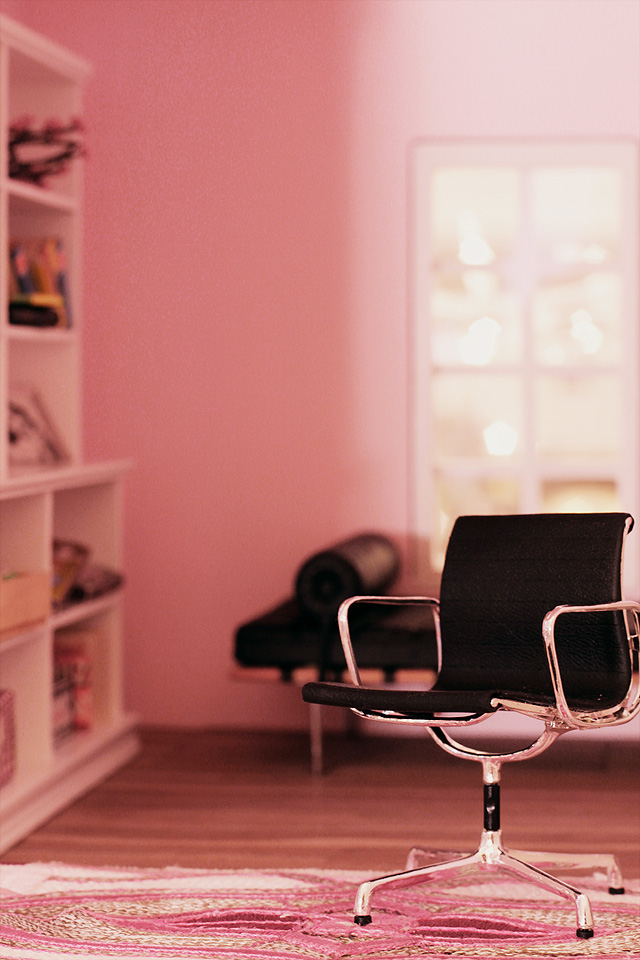 This room was going to be the nursery, but then I switched things around at the last minute. I already had the chair and chaise, but there’s no desk (oops). The accessories were in with the other little things from Brandon’s mom and grandmother. The rug and bookshelf were eBay finds. And eventually I’ll finish the stairs throughout the house. The paint is Ribbon Pink by Benjamin Moore. 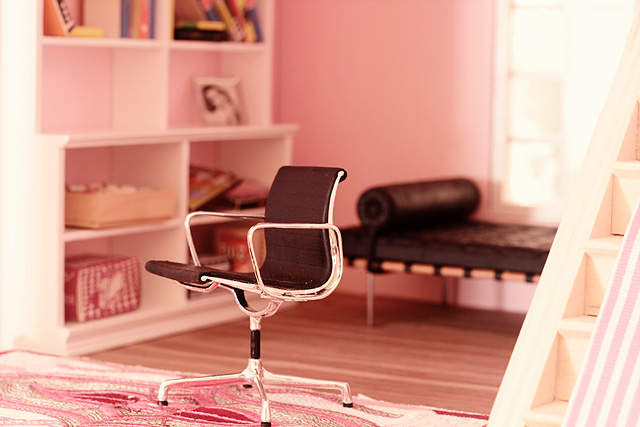 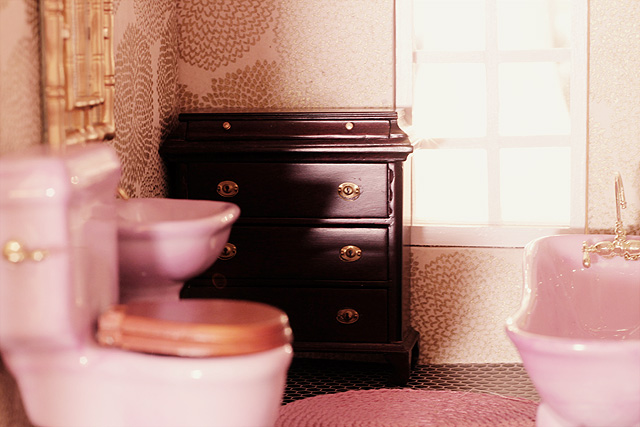 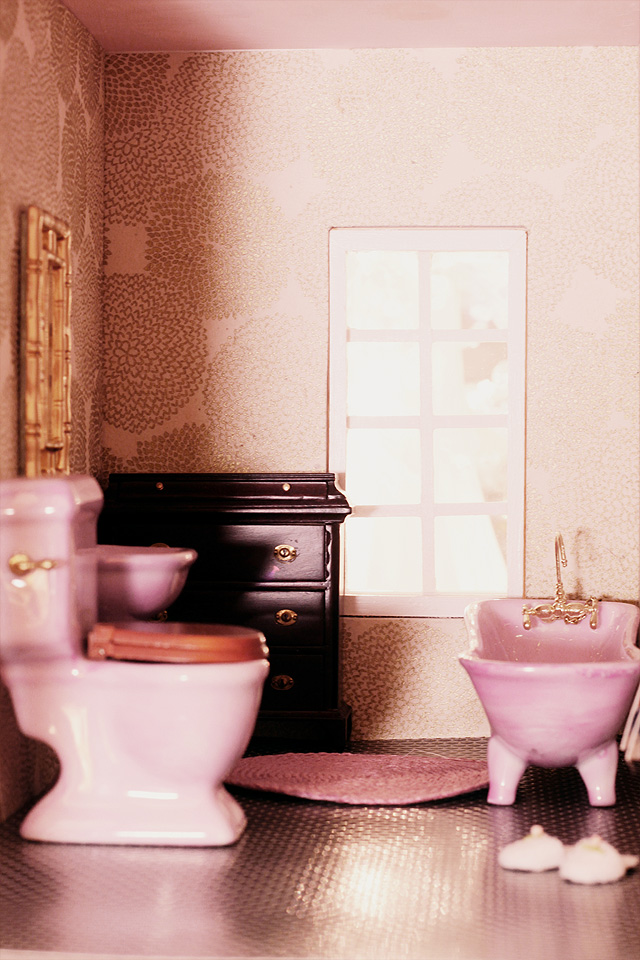 I showed you a lot of the bathroom before. The tile, dresser, and mirror were from eBay, and the slippers and ‘His and Her’ towels were from Brandon’s mom. 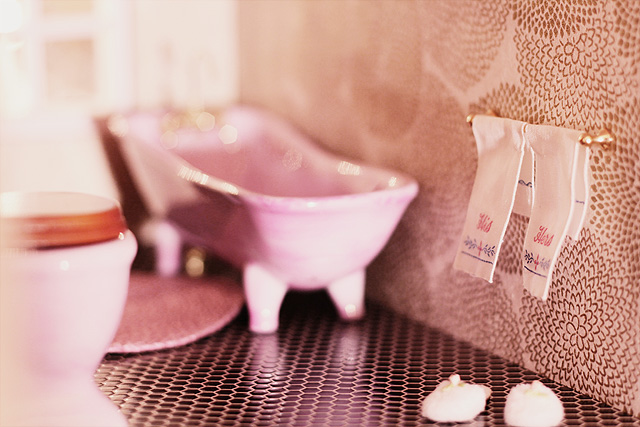 I intended to sew bedding, spray paint the bed, and make some art for the room, but I ran out of time before the deadline. I made the rug out of leftover furry fabric from Eleanor’s Halloween costume. Again, I already had the chair, but added a kitty to sleep in it. I painted the dresser pink and hung a toy camera from the knobs. 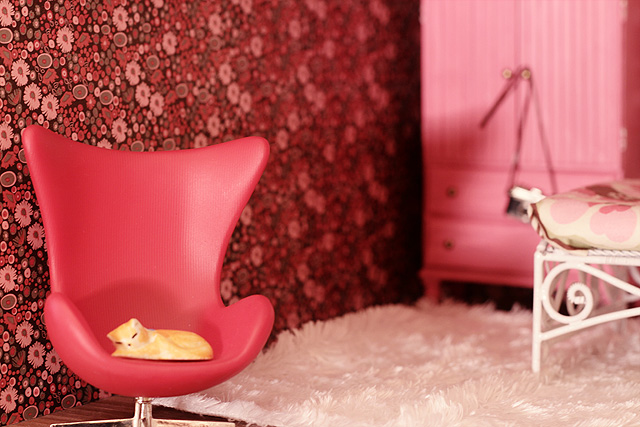 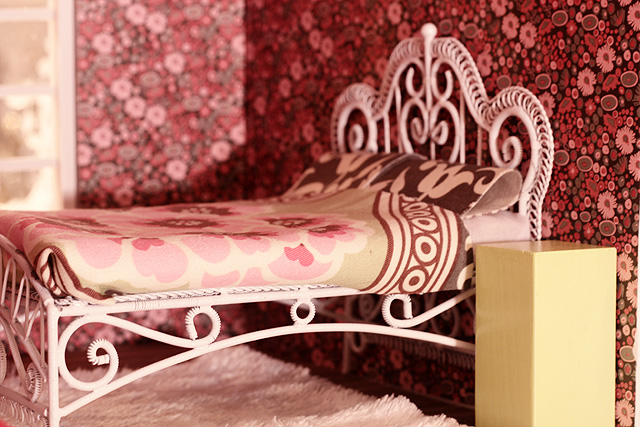 This was going to be an unfinished attic, and the kids’ bedroom was going to be what is now the nursery, but then I realized that the two beds wouldn’t fit in the other space because of the stair opening. I made the mattresses out of two pieces of foam core, sandwiched together with fabric on top. I intended to make bedding, crafty pendant banners, cute artwork, and so on and so on. This room is the least finished of all. There’s a wee dollhouse though! And an Eames rocker that I had. The paint is Benjamin Moore’s Pink Peony. 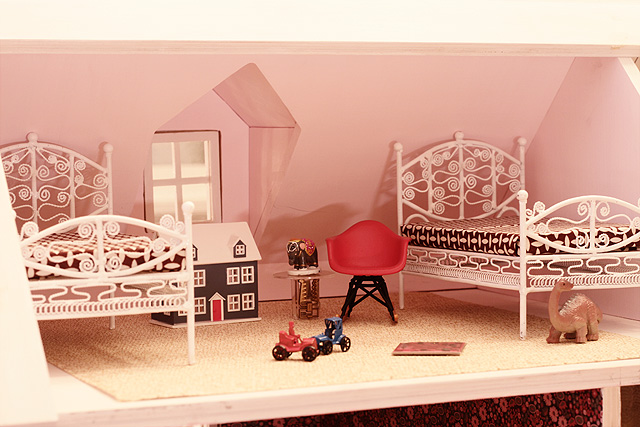 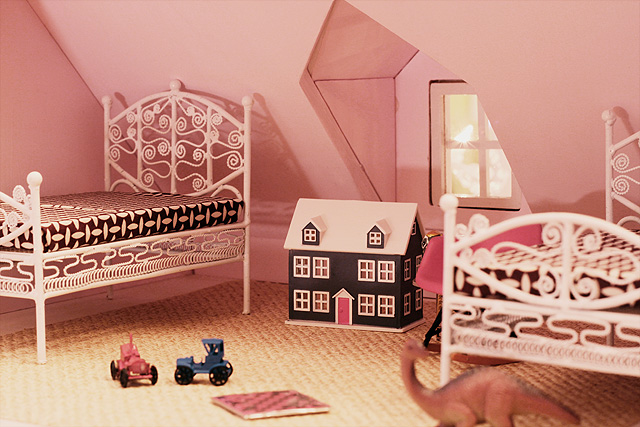 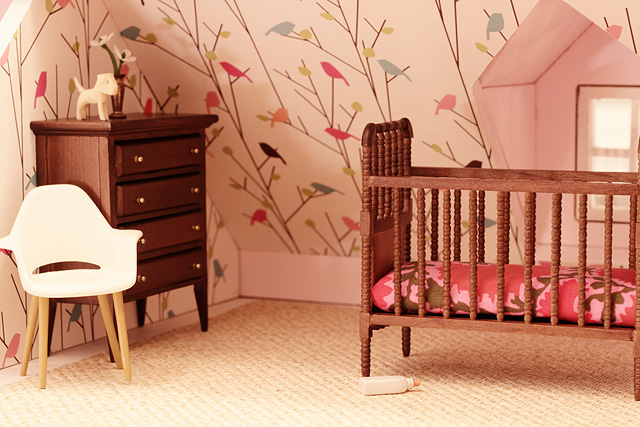 The bird pattern is wrapping paper, and Eleanor chose the crib fabric. I had that white chair already, and the dresser was an eBay find. The rug is the same as in the kids’ bedroom and the living room: woven scrapbook paper.

I will eventually finish the things I wasn’t able to get to, without the pressure of a deadline. Eleanor (and August, if he’s interested) is still young, so there’s plenty of time. I didn’t do the stairs, which I had put so much thought into, and I didn’t even touch the exterior! I’m really happy with the end result (so far) though, and Eleanor is over the moon about it. 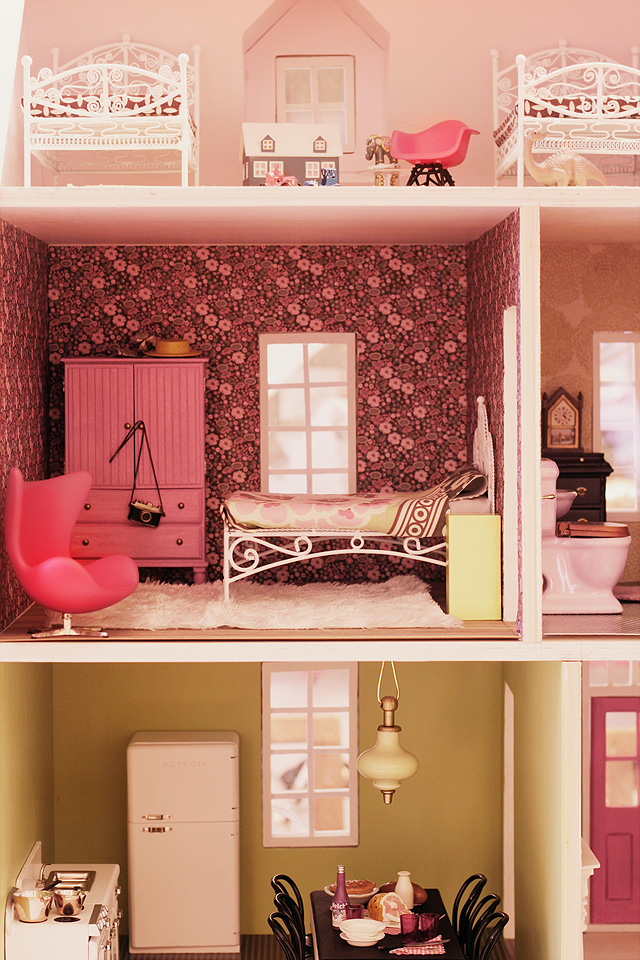 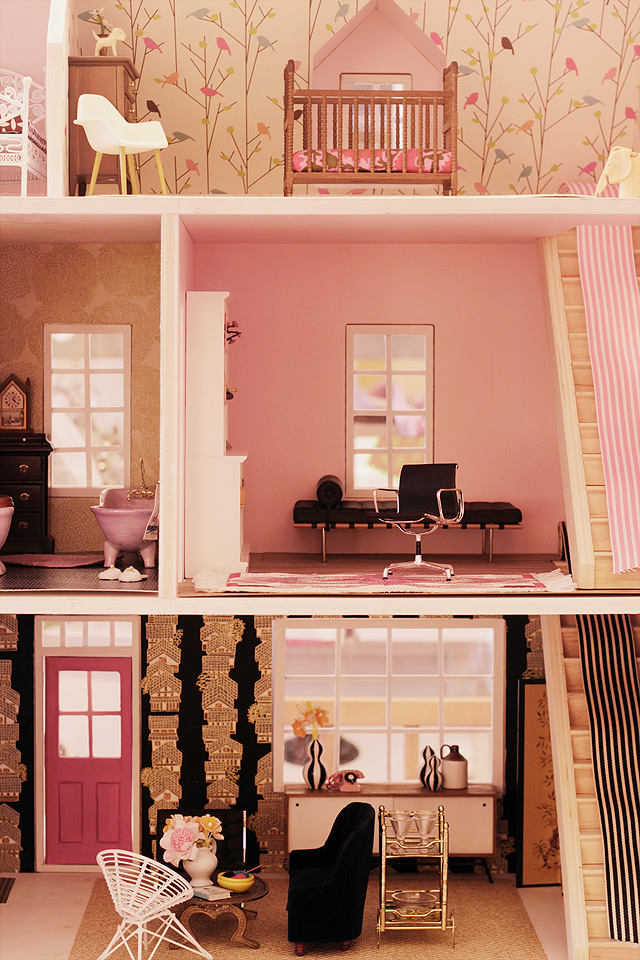 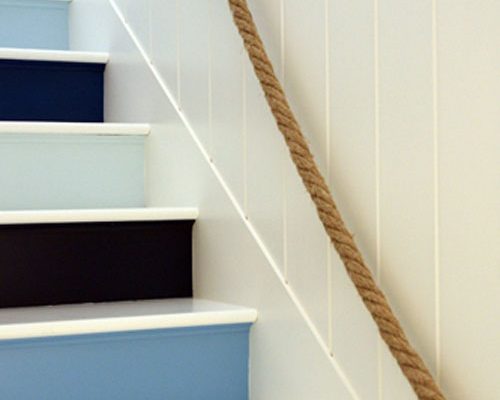 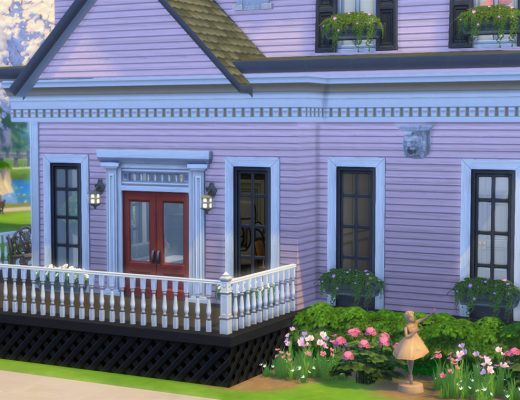 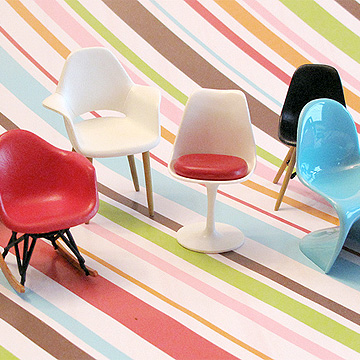 Have a Seat (or Two, or Three)