One Room Challenge: Week 3 (All That Painted Woodwork)

Let’s talk paint this week! But first, why has only one person chastised me for painting the woodwork so far? People. I expected more outrage. (I still get the occasional comment on this post from 2010 about it.)

OK, for real though. I’ve always maintained that we may paint the woodwork on the second floor. Victorian houses like mine were usually built with the nicest, most expensive materials on the first floor in the common areas, and lesser grade materials were used in the utilitarian spaces (kitchens, bathrooms) and private quarters (bedrooms). The double parlor, dining room, and entryway in my home all have old-growth oak millwork, and fir has been used everywhere else. The details and proportions are lovely — 10″ baseboards! — but the knots and wild, open wood grain are not. Often, the Victorians would paint lesser wood to look like a more expensive variety with faux-finishing, but that’s not my thing.

You know what is my thing? White trim. Beautiful, classic, nice white trim.

You know what else is my thing? White trim paired with black doors. I think the first time I really took notice of the look was after seeing Thomas O’Brien pull it off. (And this was not a deciding factor, but I met O’Brien at an event shortly after moving into this house, and we talked about painting natural wood trim. He was all for it.) Black paint looks better on doors with some architectural interest and you can fake it with flat-front hollow-core doors by adding molding, but luckily I had a good base to start with. My house has, through all of its changes over the years, kept its paneled doors with ornate brass doorknobs, and between the two rooms I’m working on now there are french doors. They aren’t original, but I do like them a whole lot. Even more so now that they’re black.

Eventually, my plan is to paint out the entire second floor. Here’s a before and after mockup of the hallway. 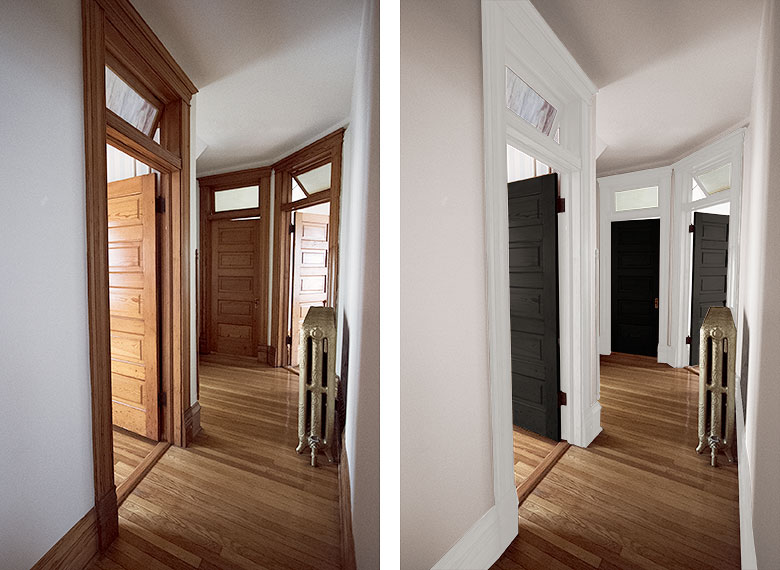 The hall color may change, and maybe I’ll bring in wallpaper or some other wall treatment, but the white trim, black doors, and antique gold radiators — those elements are staying in the plan. And now they have been made reality in my ORC space! 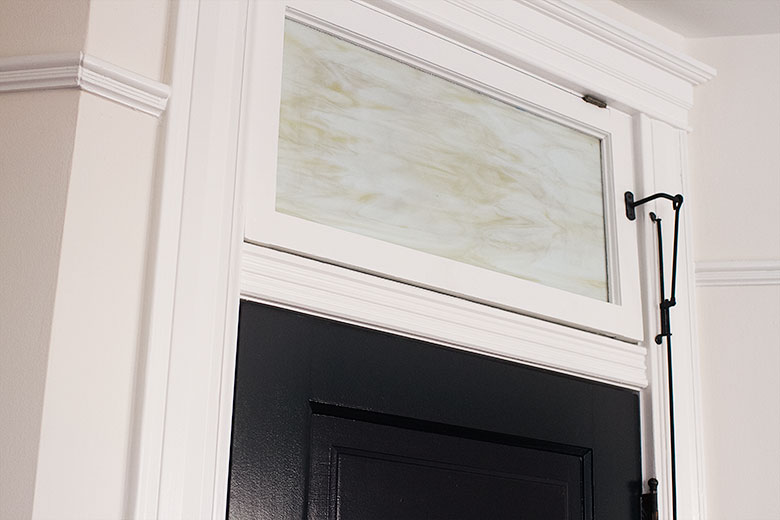 I don’t like stark white in an old home. My favorites tend to be a little warmer, with a creamy ivory tone while still reading as white. Benjamin Moore’s color of the year for 2016 is Simply White (OC-117), and while I did look at other options, I found that it was the perfect not-too-stark, not-too-cold white. I used it for the ceiling in a flat Ben formulation, and in satin Aura for all of the trim. The doors were painted Black Beauty (2128-10), which is the same color I painted the walls downstairs, but in semi-gloss Aura. I chose Everard Blue (CW-575) for the den — a dark blue with plenty of green in it from the Williamsburg historic color collection. It has the depth I was looking for, changing throughout the day under different lighting conditions but always looking good. And then for the bedroom, I wanted a subtle pink. Nothing too ‘little girl’ or ‘baby,’ and I found White Blush (OC-86) to be the perfect color. Almost off-white, but with a flattering rosy tint that doesn’t go lilac or peach. I chose Regal Select, matte finish, for both wall colors.

I did pick up several samples before settling on that perfect pink though. Just because you feel confident with a color based on the little swatch doesn’t mean you shouldn’t test it! I painted swatches right on the walls in both the bedroom and the den (so I could see the colors under different conditions). I liked Farrow & Ball’s Dimity (#2008) as a close runner-up, but I preferred the light freshness and soft color of White Blush. 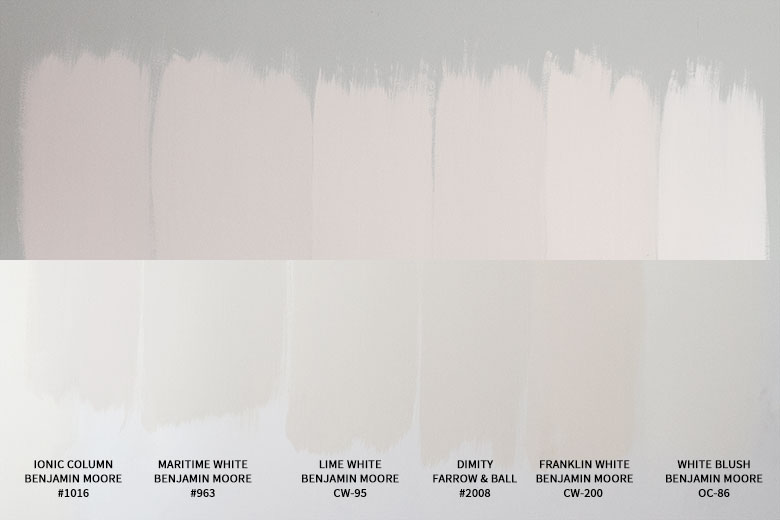 My colors had been chosen and I was preparing to paint everything myself when the opportunity to partner with Paintzen came along. They were about to launch in Chicago as I was about to start on the One Room Challenge, so the timing worked out perfectly for me to give them a try! They make it easy to work with reputable professional painters, and quotes are provided online after giving some basic information about your project. Once you give the go ahead and agree on a start date, they take care of the rest and they send a licensed, fully-insured paint crew to do the work. The service got its start in the NYC area, but they’re now available in other cities too.

You guys. I was very excited about this. I used to paint houses way back when, and I knew how much work there was to be done! It was daunting, and I didn’t want to misrepresent the job because this was a lot more than just ‘painting two rooms.’ I gave them the measurements (two rooms with 9′ high ceilings, 13×15 and 13×17) and explained that there were half-a-dozen small holes to be patched from the electrical work we’d had done. The walls needed to be painted, and the ceilings too. And then there was all of that woodwork, going from bare wood to either white (the baseboard, door trim, window trim, windows, transom windows, shutters, and picture rail) or black (the paneled doors and french doors). A LOT of work, but they were on board. Once I had chosen my paint colors, formulations, and finishes, Paintzen arranged for it to be delivered from a local Benjamin Moore retailer. They also supplied the primer (Zinnser B-I-N shellac-based primer —strong fumes, but good adhesion and coverage). I think we talked things over on a Wednesday and they could start as soon as that Friday, but we moved it to Monday of the next week to give us time to clear out the rooms and move the big stuff to the center. We had planned on staying clear of the two rooms while work was underway, so that gave us the weekend to still be able to sleep in the bedroom.

Come Monday morning, the crew met the paint delivery truck out front and then came inside at 8:00 to start work for the day. They laid rosin paper to protect the wood floors, covered the remaining furniture with plastic tarps, taped off windows and hardware with a combination of painters’ tape and liquid masking, and got started on repairs. They had the holes to fix, of course, but they also went above that and fixed any hairline cracks in the plaster they came across. One section was particularly bad, but they fixed it right up! 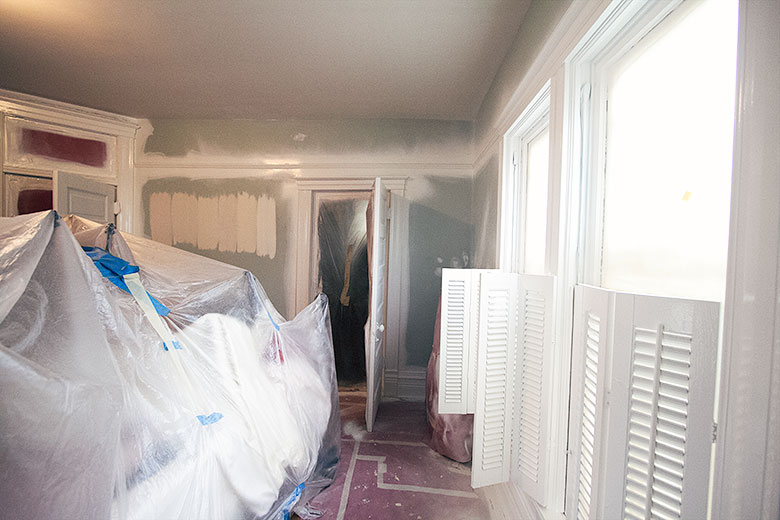 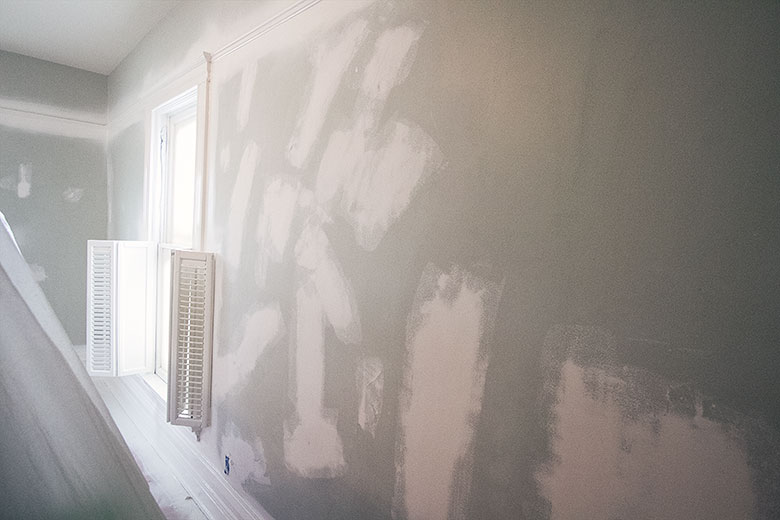 I was impressed by the attention they paid to the trim too. No cutting corners. They cleaned and sanded the wood, used an excellent primer, and sanded between coats for a smooth finish. They sprayed all of the woodwork, so it went faster than it would have with a brush, and the finish was nicer. I’ve done my fair share of painting, but I don’t own a professional sprayer. 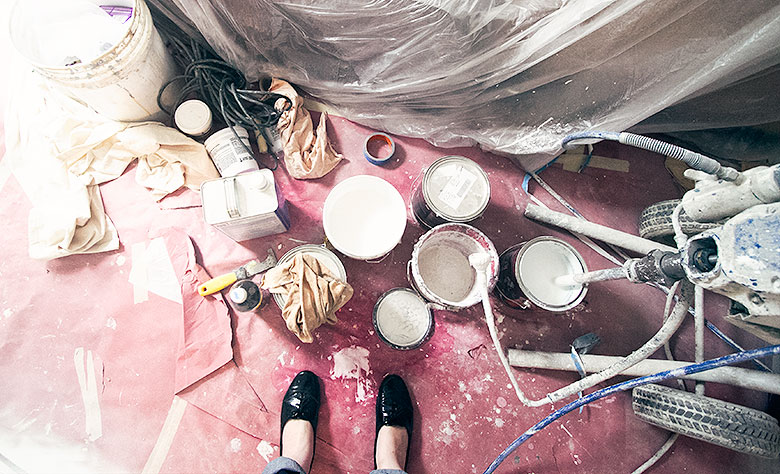 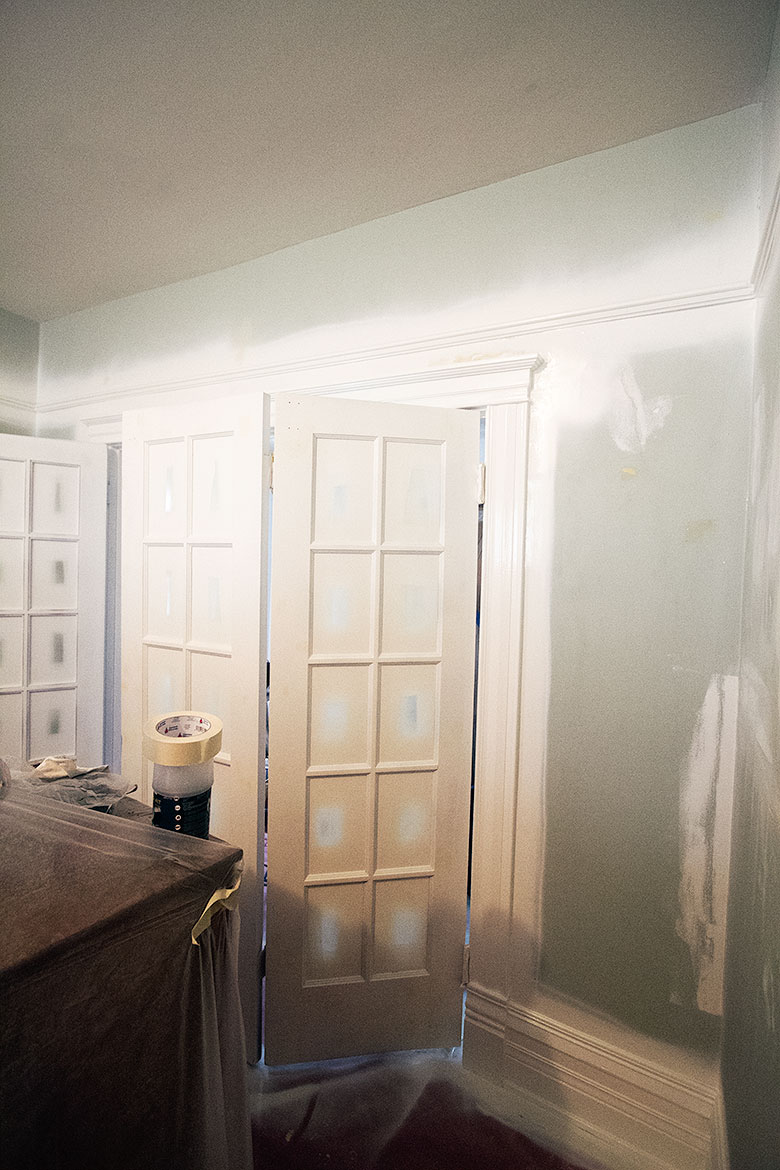 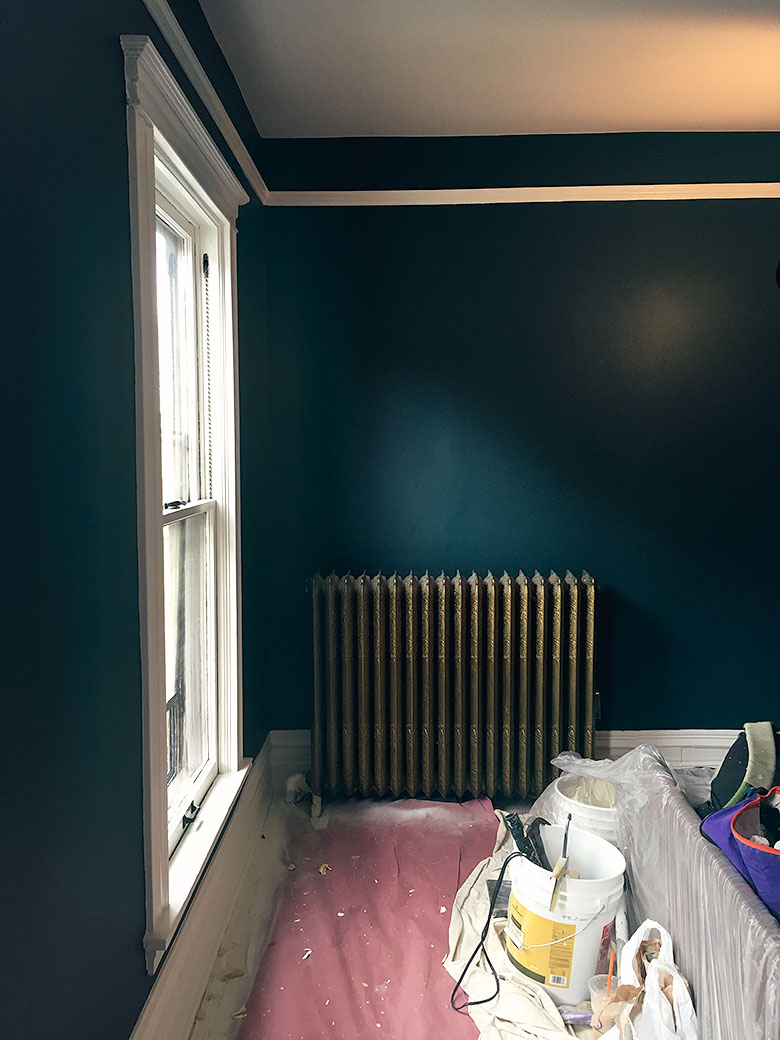 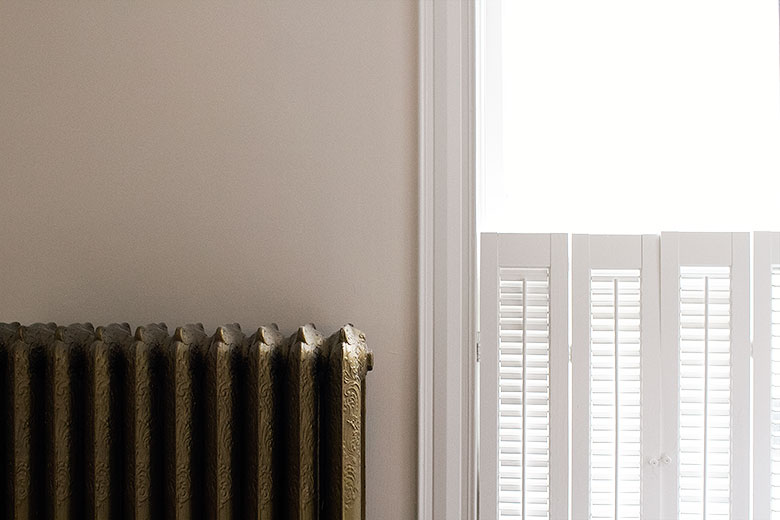 The painting crew did an amazing job, and they rocked it out in five days. They were here from 8 a.m. to 5 p.m. every day, two or three guys at a time, starting on a Monday and finishing up on a Friday. I can’t even imagine how much time it would have taken me to do all of that by myself! I would still be in there working on it. (A huge thank you to Paintzen for sponsoring the paint job — they were so awesome to work with.) 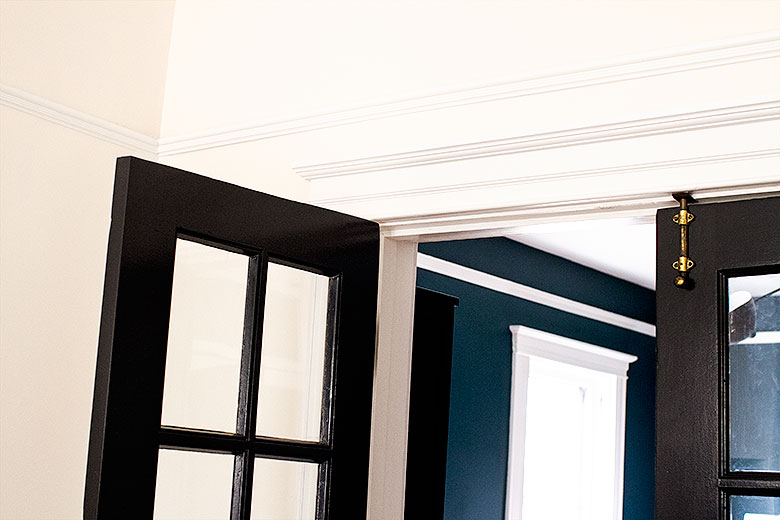 After the two spaces were painted and cleaned up, and the furniture was put back into place, the rooms started to shape up! I had a few things left up in the air when I showed you the design plan last week, but I’ve made progress on that front. I went ahead and ordered the ceiling fan, and I picked up a pair of vintage slipper chairs. (I may only use one in my design right now, but when they’re cheap and you find a pair, always get the pair. Same goes for table lamps.) I’m still holding out hope for the ottoman-as-coffee-table, but I’ve got a backup in place to be safe, in case the other gets pushed back again. And I’ve decided on the curtains: pale pink linen in both rooms, hung from the brass curtain rods I already own. I’m working with Tonic Living on them, and they’re going to sew the linen into lined curtains with a pinch-pleat top. It’s going to look so good!

There’s still work to be done (installing a lighting fixture and ceiling fan, putting up those curtain rods, that sort of thing), but the only big decision left is the art. Oh, that big blank wall. 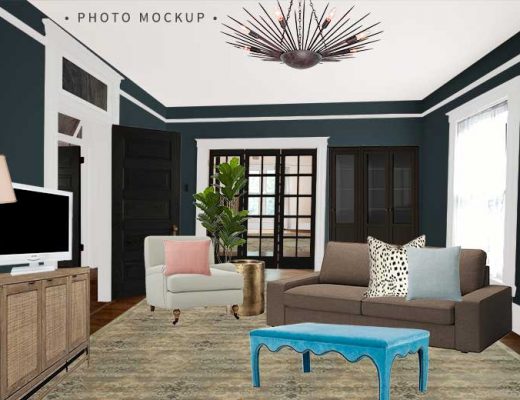 October 30, 2019
Previous Post Decorating for a Cute and Casual Backyard Party
Next Post The Best Shorts (on Sale!)