Den• One Room Challenge• Our Bedroom

One Room Challenge: Week 4 (Rugs, Curtains, Bedding, and Other Fabrics)

I shared a photo on Instagram of the paint swatches, fabric samples, and finishes for the bedroom and den, but let’s dive into it all in a bit more detail.

The wooden hand holding the paint chips represents the wood furniture in the two rooms (two dressers and a sideboard). The brass is present throughout in the hardware choices (curtain rods, vintage dresser knobs), lighting finishes, and a small accent table. You saw in last week’s update how the paint colors from the chips below have been incorporated, and of course it’s all in the design plan. The fabrics represent the duvet cover and sheets, pink linen curtains, and a pair of chairs. 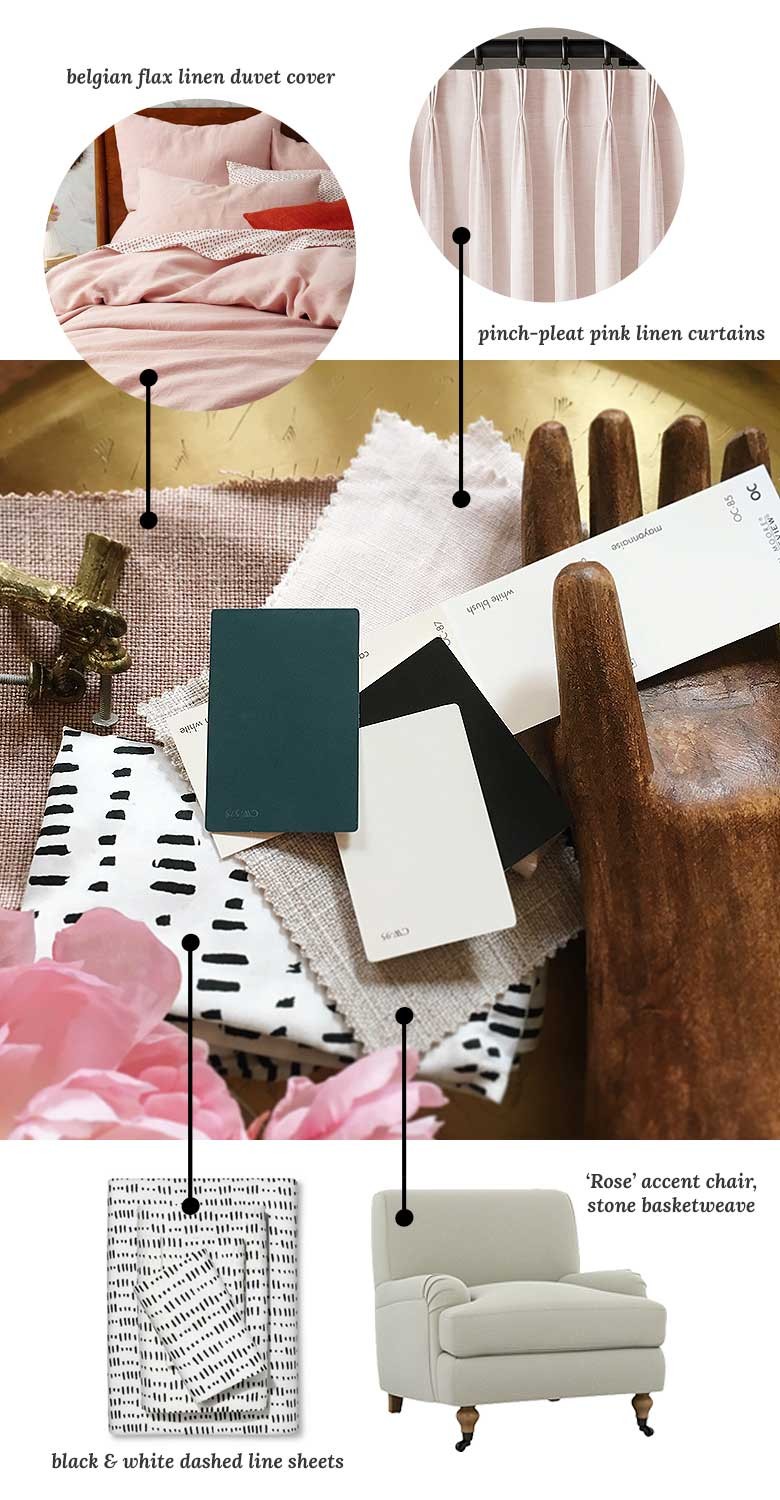 I knew from the start that I would be painting the two rooms different colors and because the bedroom and den are only separated by french doors, they need to go together. The ceiling, trim, and doors would be consistent throughout, but I also wanted to add continuity in other ways. I have a whole-house palette going on that I’m quite happy with (pink, teal, black, white, wood, brass, and a little red) and these rooms fit, but of course there is still room to play! Today, I’m focusing on the rugs, curtains, bedding, and other fabrics. What I chose and why, and how it’s all going to work together.

The bedroom is 13×17 and the den is 13×15, so both rooms can handle large rugs. I wanted to repeat the same rug to bridge the two spaces, and I looked to Loloi because I’ve worked with them in the past a couple of times and liked both the designs and the quality. Though I’m often drawn to bold patterns, I was looking for subtlety this time — something beautiful, but that wouldn’t draw too much attention away from everything else. Initially, I had thought about maybe using the Journey rug that I’d styled in our living room. Once I decided to paint the walls that color though, adding a matching rug would have been too much. I suppose I could have used it in the bedroom and a neutral (or otherwise complementary color) rug in the den, but again, I wanted a matching pair. I found what I was looking for in the Nyla collection. 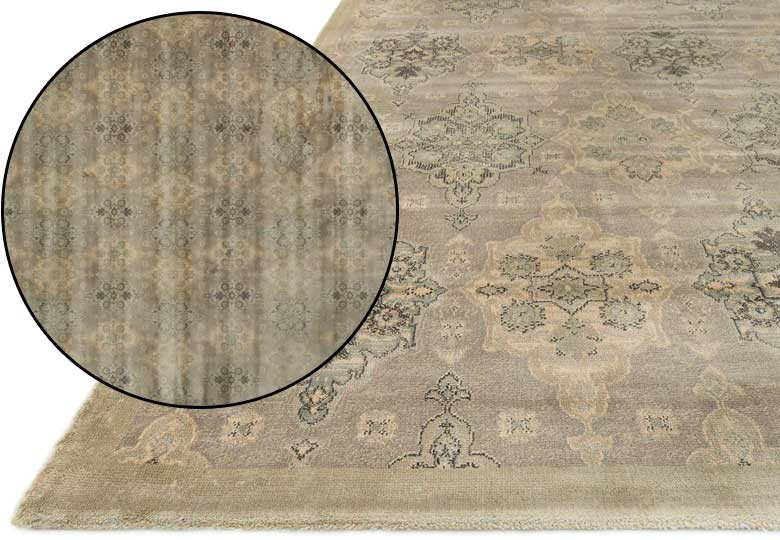 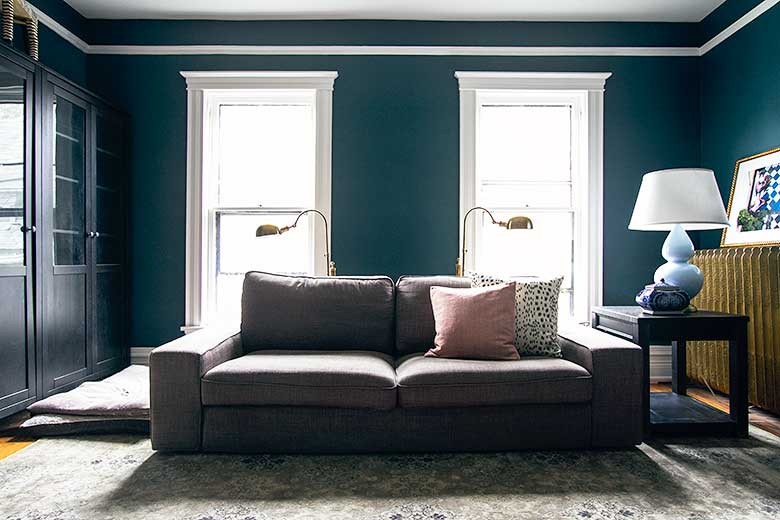 The rug I chose picks up on the wall color of the den, but it looks good against all of the pale pinks I’m using throughout too. And it is super soft.

Both rooms will be getting pinch-pleat pink linen curtains from Tonic Living. I’ve had my sample swatch of that fabric for about two years now, just waiting for the right project! The pale pink will blend in with the wall color in the bedroom, but be a nice relief against the deep teal blue walls.

The bedroom has wooden shutters on the bottom half of the windows, and that’s enough privacy most of the time, but it will be nice to have the option to draw the curtains again. Someone asked me how I sleep in with so much light, and I thought ‘hahahahahahaha — I have three young children, what is this “sleeping in” you speak of?’ It will be nice to be able to darken the room a bit though when we want to. I chose a standard lining for both rooms.

The den does need a bit more light control because we get a lot of glare on the TV. Curtains are going up, yes, but I’ve also ordered Allen + Roth solar shades from Lowe’s. They’ll help with both glare and temperature control, which is a big plus in an old home without central air conditioning. 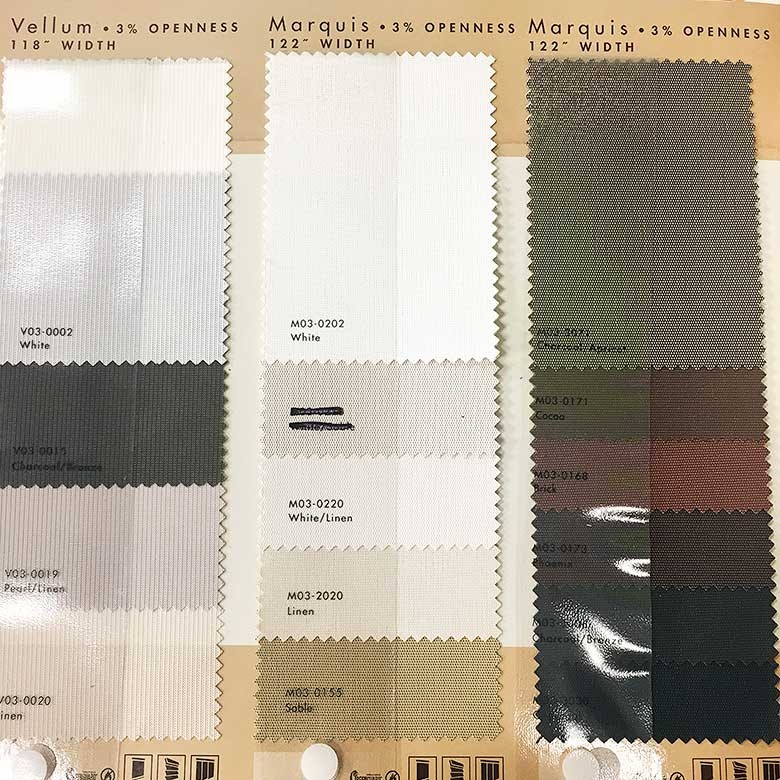 I spent a ridiculous amount of time choosing the right fabric and options. I went with Marquis in White, 3% openness. I also liked White/Linen, and there was a 5% option too, but I think the brighter white will be better behind the curtain fabric and it isn’t so stark that it will look too modern or cheap, as super bright whites sometimes do. I chose the corded option (it has a safety mechanism to mount the chain to the window so little kids don’t loop it around themselves), and options like a finished hem and matching fascia to keep it as clean-looking as possible. Even though the shades are all about function, I want the form to be nice too.

I used to have tons of options for bedding that I’d amassed over the years. A few quilts, a down comforter with various duvet covers, different sheets, and plenty of colors and patterns to mix and match. Then we went from a queen-sized bed to a king last fall, and I gave away all of our too-small bedding to friends and family. Now I have one duvet cover, and I’m up to three sets of sheets. I was pretty jazzed about finding that third set of sheets though, because due to the winking eye pillows on the bed, the patterned dashes look like a million little eyelashes are scattered everywhere. I’m so into it!

So the go-to has been those sheets with the pink duvet cover. I have my Moroccan wool blanket too, and while it looks good (pom-poms!) and is pretty warm, it’s not the softest thing. Plus it’s wool, so we can’t pop it in the wash. It’s not such a big deal now that the weather is warming up and we don’t need a bunch of layers on the bed, but I do miss having a light quilt. I’ll be adding the Boyfriend Matelassé Coverlet from Pine Cone Hill. In what color? Pink! (Nope, Brandon doesn’t mind the color at all. Yes, I’m asked about that a lot.) 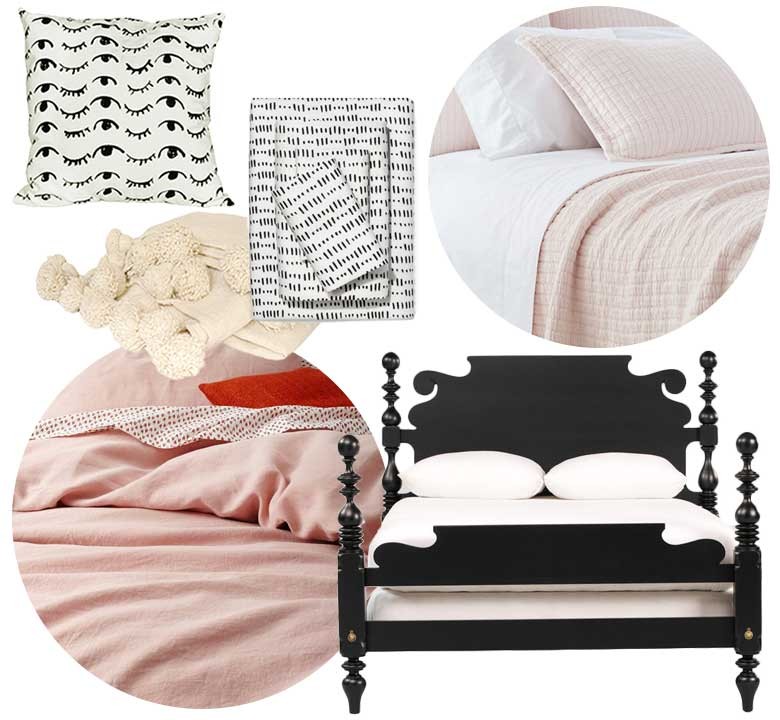 It’s a lot of pale pastel goodness, but then it’s all set against the black of our bed. Boom.

The sofa in our den is from IKEA (Kivik — I wrote about choosing it here), so it would be easy to pop over to the store to pick up a new cover. I like the idea of keeping it neutral though and I still like the color it is now, so I’m not sure if it will change or not.

Ours is the top left and I like the bottom left a bit more, but it’s not a huge difference. Of course the white is nice and I’ve heard that the cushions clean up nicely in the wash, and the bottom right gray color could work too. The den is getting a throw blanket to match the bed’s coverlet, and there will be pillows in pink, blue, and black and white.

There is a pair of chairs coming from Interior Define. They sell customizable sofas and chairs through their site to customers across the country, but I was able to check out their showroom here in Chicago to see everything firsthand. I loved the Rose sofa and if I could fit it up the stairs, I would have chosen it in a heartbeat! English roll arms, turned legs, a deep seat, and very comfy cushions — perfection. Their furniture can be resized (you can do more than just choose a color!), but to shorten it enough to fit up our narrow stairway would have changed the proportions too much and I don’t want a love seat. Luckily, the same style is available in chair form, so that’s what I went with. 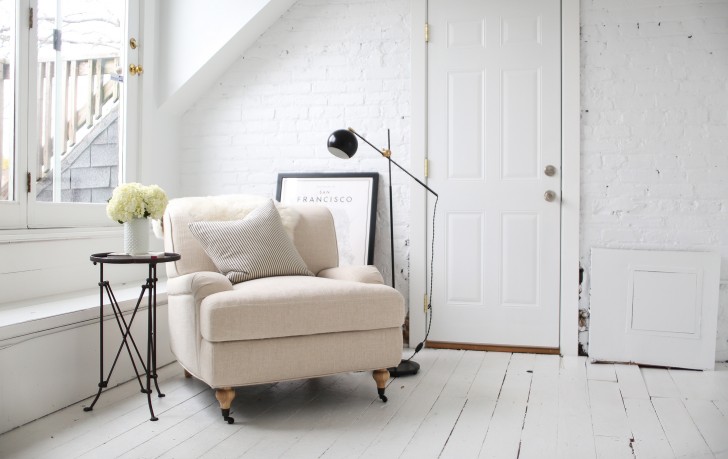 The Rose chair is available in 18 different fabrics and I requested samples of my favorites before deciding on a color. It was a toss-up between the ‘Natural Heavy Fabric’ and ‘Stone Basketweave,’ so I called their customer service department and asked about durability and care. The Stone fabric sounded like a more durable choice that would wear better and clean up a little more easily, and as a mom of three with five pets in the house, I was sold. The chairs are going to look great in contrast with our low, boxy couch.

The last big unknown was the coffee table. I had initially planned on a turquoise velvet ottoman, but I was worried about a timely arrival and it was indeed delayed again. I picked up a pair of slipper chairs two weeks ago from a local furniture consignment store (Divine Consign) and I also grabbed a coffee table at a good price as a backup for the room. I like the shape of it a lot, but it’s knotty pine and while I could paint it, the bigger problem is that it’s too big. If I could shrink the height, width, and depth down by about 15%, it would have been perfect! Ha. So I was on the lookout for another option. Turned legs or carved wooden details, or maybe a different ottoman?

Found it! It’s a “Rug Ottoman” from Annie Selke. Yes, as the name implies, it is upholstered with a rug. It’s actually a more practical choice than the velvet would have been, and they come in a bunch of different colors and patterns. My design is changing a bit (the turquoise is out, and in its place, stripes and turned legs), but I’m excited about the way it’s all coming together! And bonus: Murray’s dog bed is in the den and he’s going to get a little upgrade in the form of light blue and white stripes, also from from Annie Selke. Very cute.

Here’s how all of that goes together. 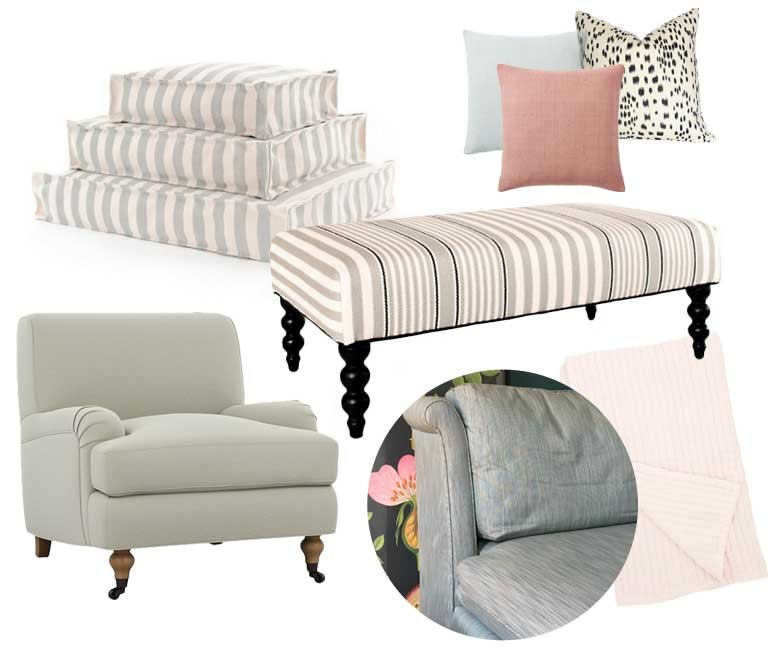 (Oh, vintage chair. You need a little freshening up.)

We’re coming up on that final reveal! Only two posts left!

My One Room Challenge Sponsors

Follow along from the beginning!
• Week 1: The Before Shots • Week 2: The Design Plan • Week 3: All That Painted Woodwork • Week 4: Rugs, Curtains, Bedding, and Other Fabrics • Week 5: The Lighting 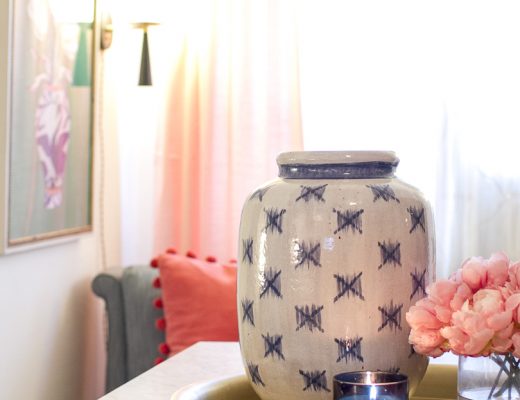 One Room Challenge: Week 4 (Putting it Together) 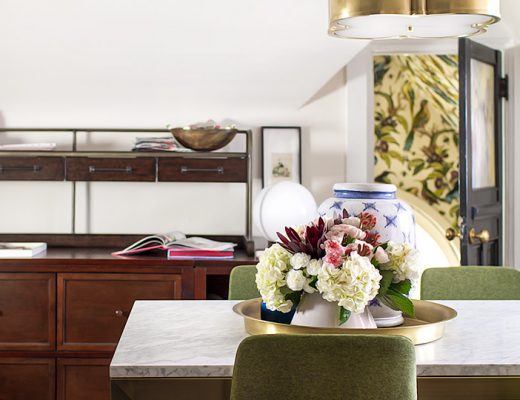 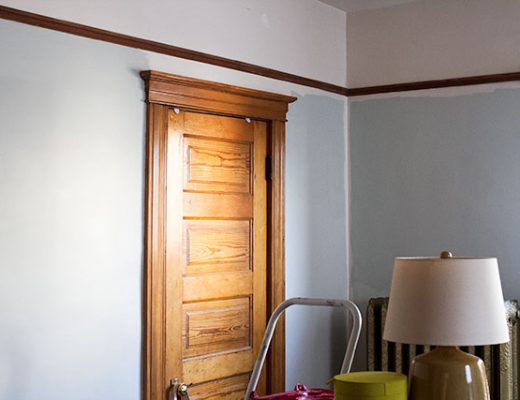 Sea Salt in the Bedroom