The Snug• The Victorian House

Someone had referred to our wallpapered back room as a ‘snug’ in the comments — the English term for “a sort of cozy, small room for reading or watching TV,” as they had put it. I like it! This is our snug. 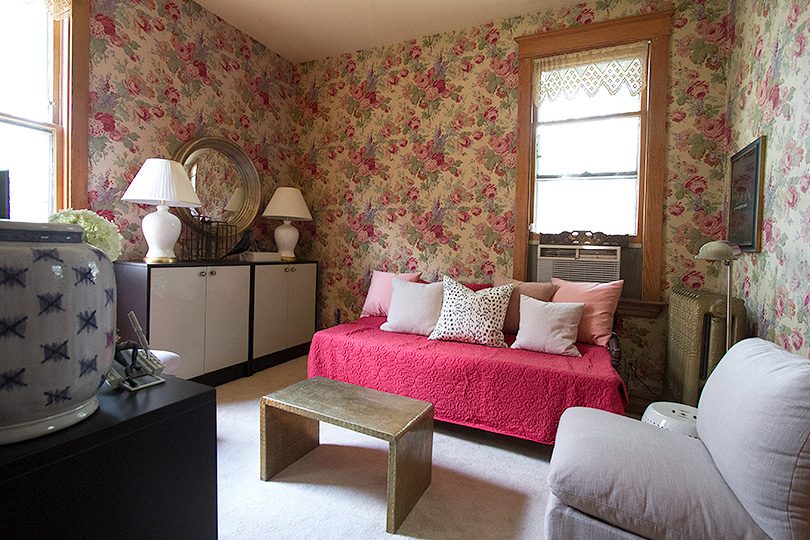 The shell of the room (read: white carpeting and wallpapered walls) remains as it was when we bought the house. We kind of ignored this space for a long time, a luxury afforded to us by the rambling nature of our funny old Victorian. We have the larger tandem room off of our bedroom with our TV, and tablets make it possible to stream a show anywhere, so we didn’t bother with a television on the first floor for the first few years. We use the double parlor for reading, coloring and drawing, for playing games, making music, and entertaining. I feel like the second you put a show on, the kids are all drawn to it, and there go any other activities! I have to admit though, it is nice to be able to have the kids watch something nearby at times while we’re busy, and there’s less fighting when it’s on a TV vs. a handheld tablet.

The back room sort of feels like a modern house’s family room, tucked away at the back of the house behind the kitchen, except ours is much smaller and definitely not modern. I was eager to get moving on this quickly because as one of the few rooms here with air conditioning, it’s kind of our retreat from the heat. Rather than fight the wallpaper, I embraced it and looked for more traditional pieces. 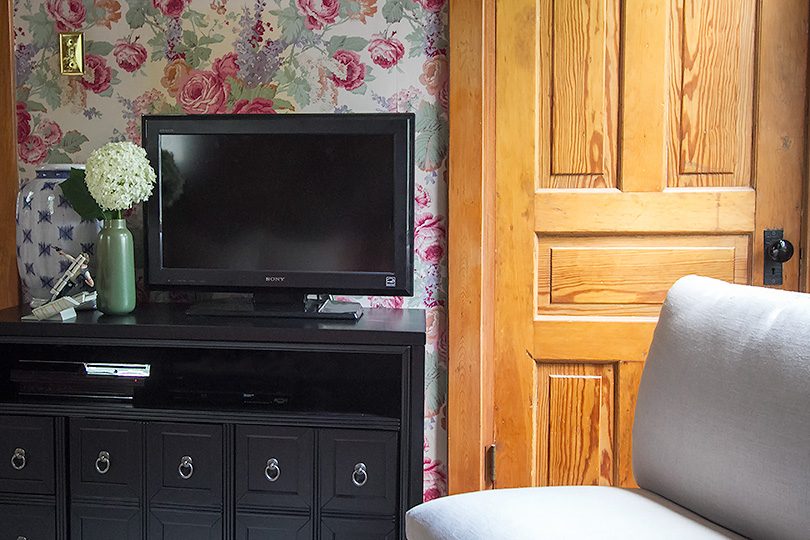 Overstock has an amazing selection in tons of styles, making it easy to get your home ready for the summer at affordable prices. I had a couple of things in the room already that would be staying, so I started by looking for a great media center. Those apothecary drawer fronts on the TV stand are nice, right? Total fakes! The two on the very left to open to small drawers, but the rest are actually door fronts that open to reveal a shelf inside. 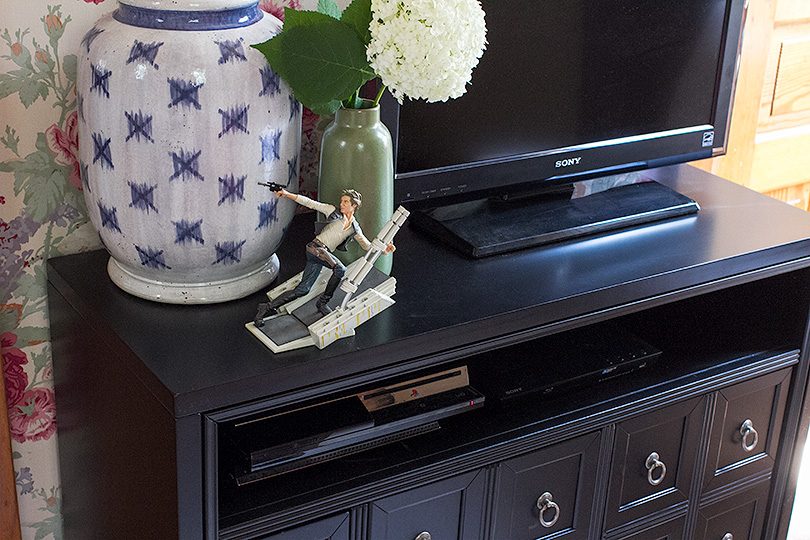 There’s more storage along the wall with a couple of our old bookcases. Doors keep everything out of sight, so we can fill them with the kids’ toys, or more movie and game storage for Brandon. I added a couple of granny-ish lamps on top, and I’m kind of into the effect with the cabbage rose wallpaper. 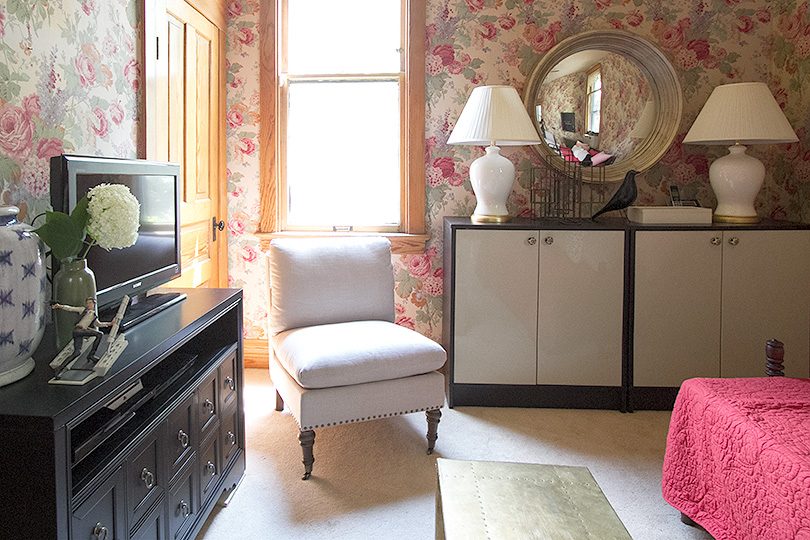 A large round mirror above turns this area into the room’s focal point. The finish on the frame is more of a mix of gold and silver than I had expected, but the depth is really pretty. And since this is a room for relaxing and vegging out a little (not worrying about your vanity), I like that it’s a convex mirror! It distorts the reflection just enough that you aren’t compelled to check yourself out in it as you enter to sit down. 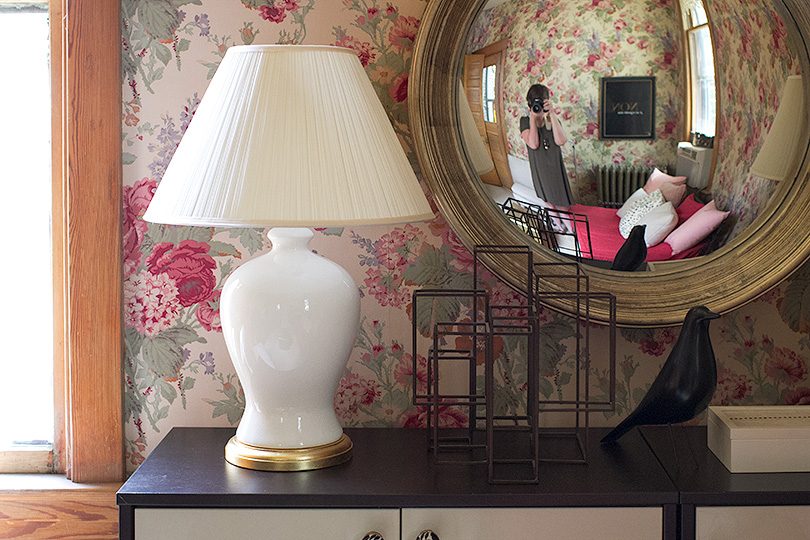 The room is definitely small (snug!), so I chose armless slipper chairs to bring in a little more seating. I also brought in a vintage brass table, grabbed from another room, and a ceramic garden stool to give us a place to set down a drink or some snacks. I also hung a favorite old print of mine (non, je ne regrette rien) in a black frame to better stand out against the floral paper. 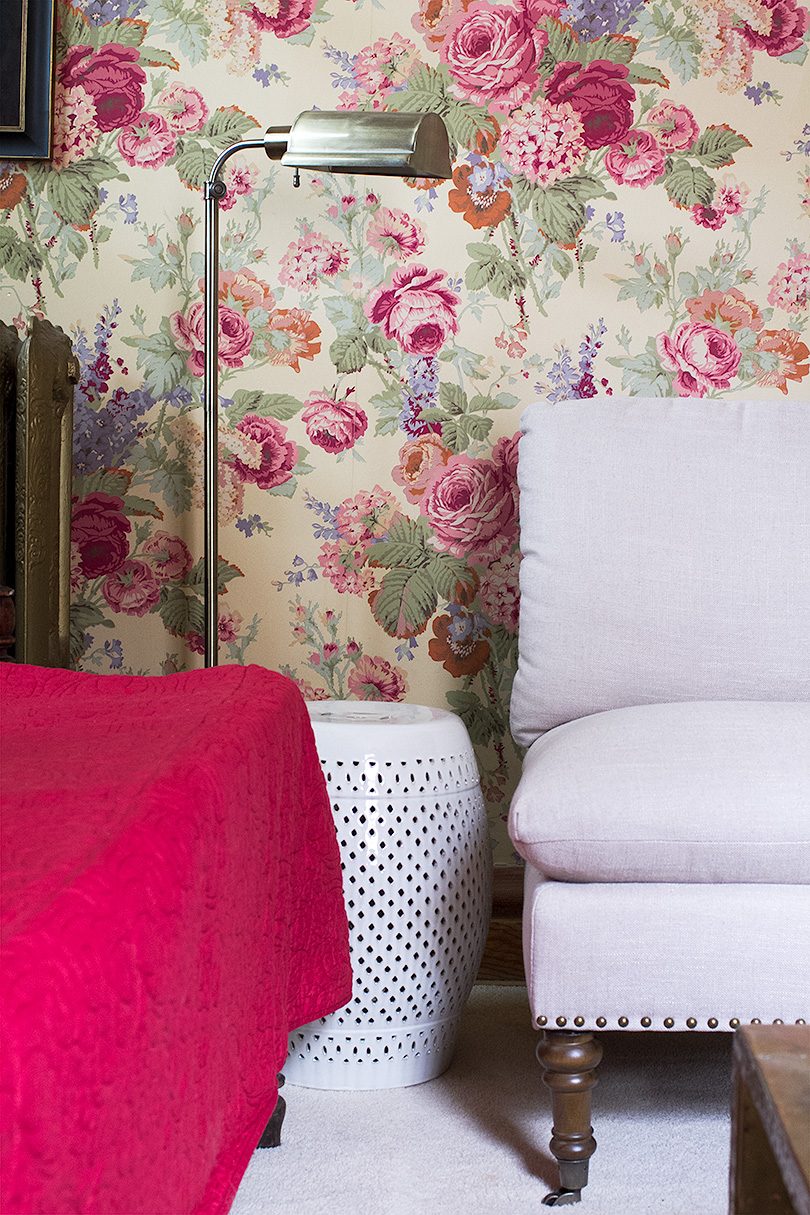 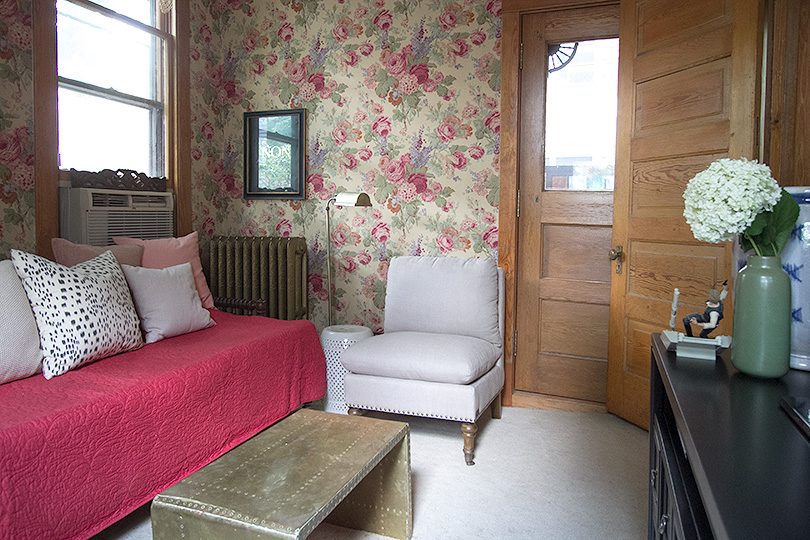 I brought in tons of pillows, mostly stolen from other rooms plus one new one with a pretty texture. The daybed cover fits so nicely and gives it a more tailored look, but I think that if I have one regret about the room it’s that none of the seating has arms. I still stand by my choice of armless slipper chairs because of the layout; it’s the antique daybed I’d replace. 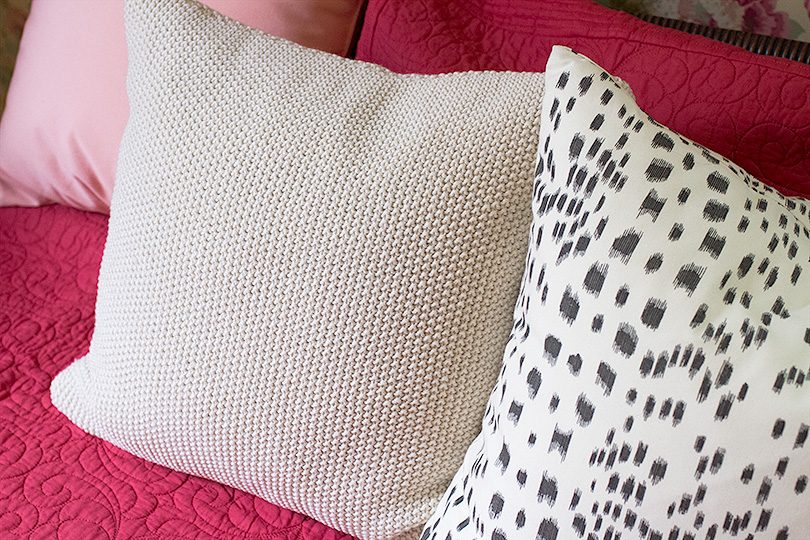 This is one of the only rooms that ever gets truly cool when it’s hot out! Our house is heated by radiators, so adding central air is a much trickier and more expensive project than in a house with existing ductwork. The window unit is a bit of an eyesore, but when it’s 90 degrees inside and out, we definitely appreciate having it. Placing the daybed in front of that window isn’t ideal, but it’s not so terrible either. 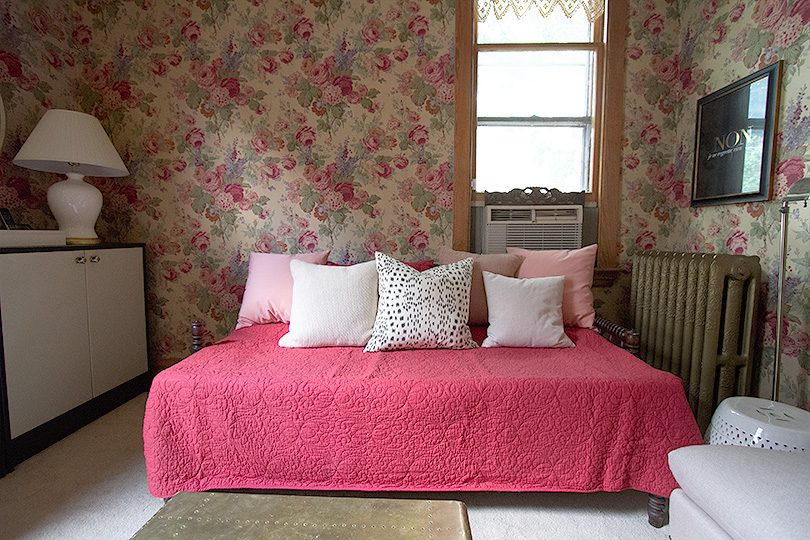 A perfect little snug. I’m so excited to have this extra living space to a point where we’re finally happy with it! It was silly to ignore it for as long as we had. 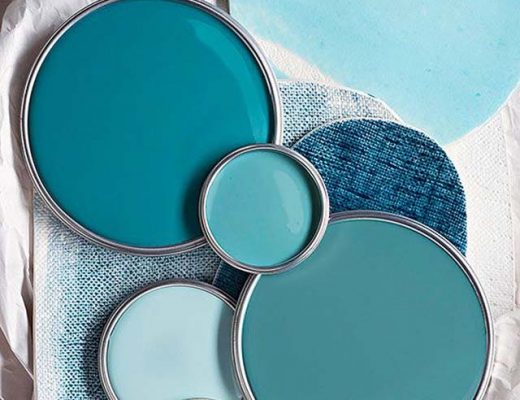 Teal for the Entryway? 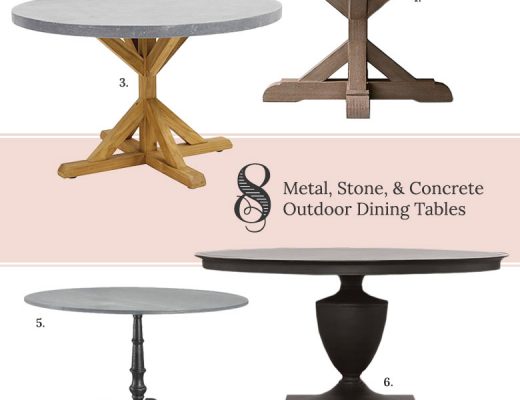