Me• My Life• Pink Loves Brown

At The National Stationery Show 2008

Yesterday, I talked about setting up. Today, I’ll go into details about what it was like being an exhibitor and what the show was like. 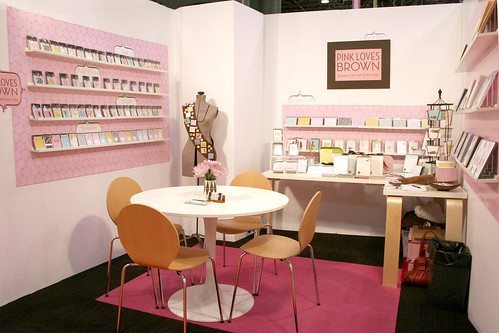 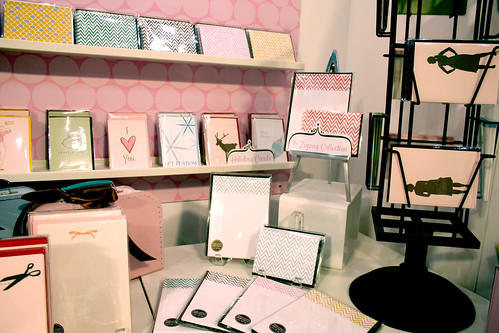 I started my business in 2005, but this was our first time doing the show. Unfortunately, from what I hear it was pretty slow this year (blame the economy). Still, I picked up some great new stores that will be carrying my Pink Loves Brown goodies soon, and I’m very excited! I also talked to some amazing people and met tons of fellow bloggers and artists that I had only ‘known’ online. That was probably my favorite thing about the show – I loved meeting everyone.

Speaking of meeting people, I saw Chris and Keith from fred flare walk by the booth. An embarassingly stupid “Oh!” escaped my lips, accompanied by an equally stupid arm flailing. A favorable impression was not made. Yeah.

My Periodic Table of Sentiments were up for a ‘Best New Product’ award, but we didn’t win. Do you know what did? A card with three hamsters, all of which had halos. Glitter halos. And the card lit up when you opened it. Huh. Geared toward a slightly different market, wouldn’t you say? Congratulations sparkle angel hamsters. 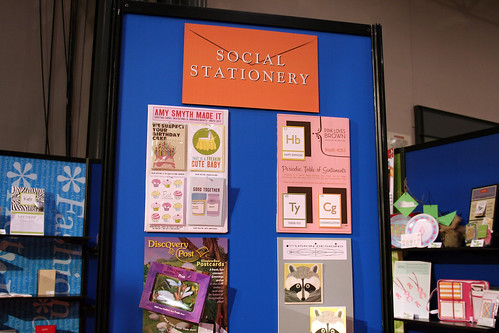 Our booth was all the way down towards the end. We were near some great companies (Jack & Lulu, Whimsy Press, Bob’s Your Uncle…), but most people seemed tired by the time they got down to us. I’m not sure how much the location matters, but I suspect that the other side of the show was a bit more hoppin’.

Oh, but we were across from the Lomography booth, and boy were we glad! We needed some fun people to be near us or I think Brandon and I would have gone crazy. Hi Lomo peeps! We love you!

Midway through the first day, a woman from GLM (the company that runs the gift show) came in and gave me some advice. She said the booth looked great, but that I might want to move the merchandise towards the front so that people can see more from the aisle. That way it feels more like they’re still in their space, and people are more comfortable with that.

We rearranged the furniture that night. 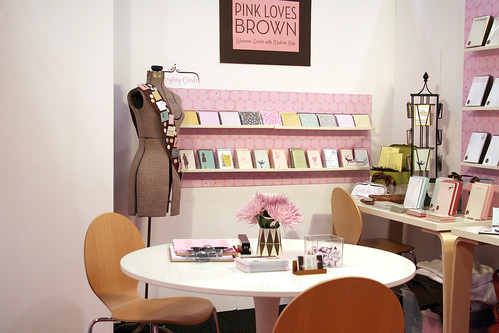 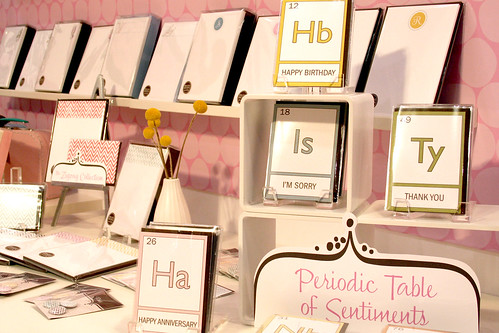 The table felt a little crowded with all four chairs around it, but we didn’t have anywhere to store them. I decided to tuck them under the tables along the wall, and it looked fine. Actually, it looked kind of cute. 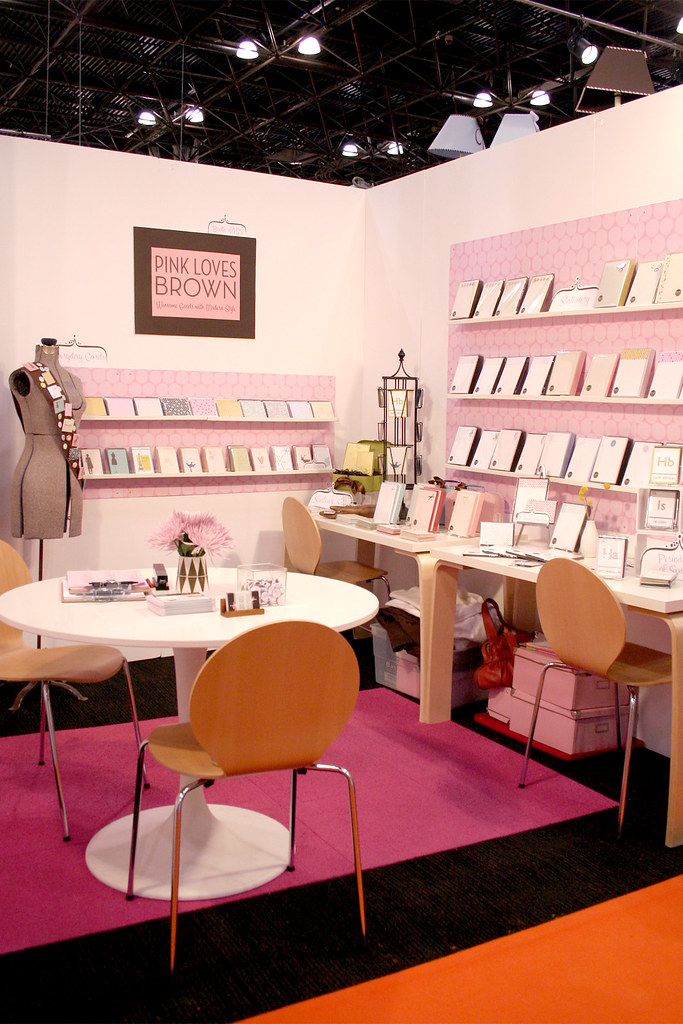 Most of the other booths didn’t have their business cards and information easily accessible, whereas ours was front and center. Do you know why? It took me a day and a half to figure it out. Contacts! Follow-ups! If people can just grab your card and go, you have no idea who they are and where they’re from. Oops. At least I figured it out for the rest of the show.

Our shelves fell off the wall several times during the show. It was like a guessing game. When will the next one fall? Which one will it be? That was fun. 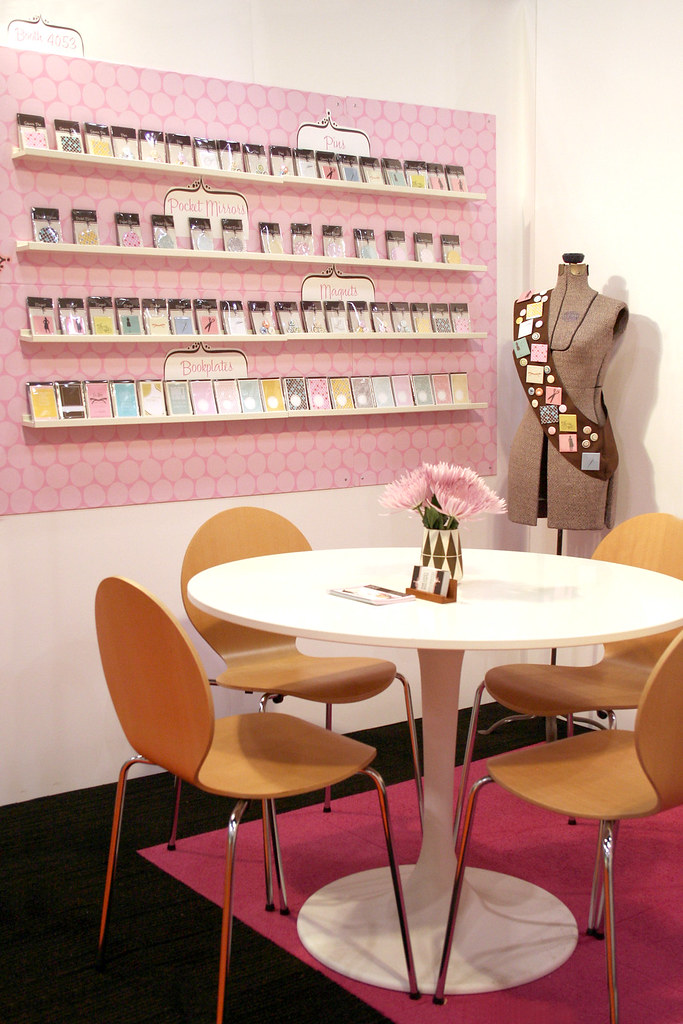 See? You can hardly tell that the shelves are all cattywhompus!

I don’t think I’d use my round table again, unless I had more space. Hardly anyone sat down to write an order – most people just pulled things off of the shelves and used the table as a surface to gather everything they wanted.

In addition to people pulling items temporarily from the shelves, we did give away a few samples. It is a trade show, and you can’t sell anything directly at the show, but I’m glad that I brought more than one of each item. We talked to a lot of reps, and several asked for samples. We were able to just grab items off the shelves for the people that needed them, and I know of another exhibitor that was able to provide some items immediately for a magazine photoshoot.

We had tons of little 1″ buttons to give away. They were popular and a lot of people took one, but I think they were pretty small-time. A lot of the booths were giving out tote bags, which meant that there were a lot of people carrying around big advertisements for those booths (hello, prominent logo!). Very smart, if a bit costly. 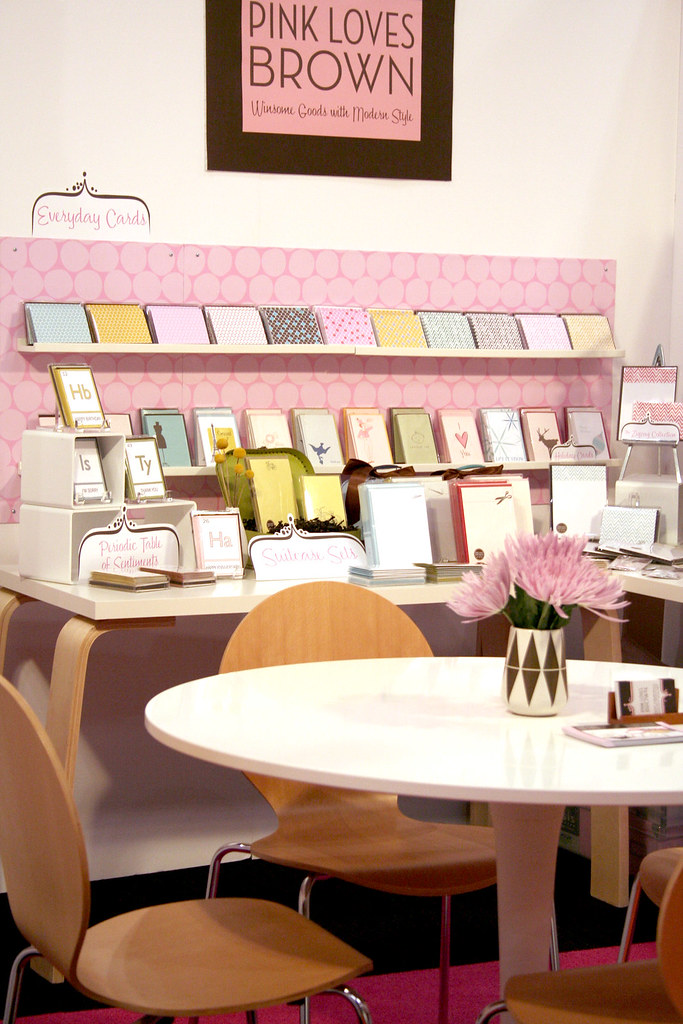 I’m sure I’d make changes next time. A different layout, a smaller table, making sure the shelves don’t fall of the walls… you know, little things like that. ;) A lot of people were surprised to hear that it was our first show – it was an odd compliment (they expect a company’s first booth to look bad?). Still, I think the booth turned out pretty well. I was proud, and it was a nice feeling to be surrounded by the things I had made.

It was an expensive show, preparing for it was incredibly stressful, and I spent a lot of sleepless nights working. Where do I sign up for next year?

Next up: Our experience after the show. 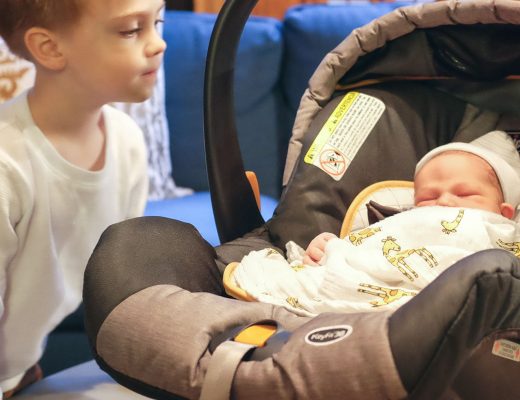 An offer has been made.

The Shop is Open Again!