I get a shower each morning too. Now, let me preface this entire post by saying that I think temperament has a lot to do with it. And before you hate me too much for having such an ‘easy’ baby, just know that she barely sleeps during the day and she doesn’t appreciate me trying to do crazy things like oh, sitting down.

I don’t keep Eleanor on a strict schedule during the day. I pretty much parent on demand (though a natural schedule is starting to emerge), but I’ve followed the same bedtime routine each night since she was two weeks old. 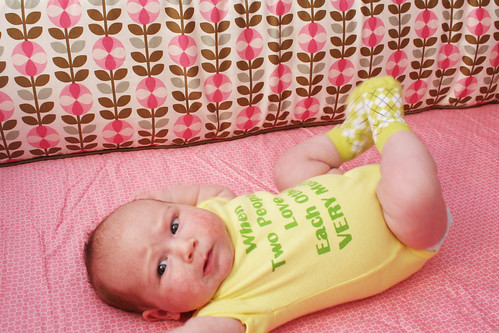 At first Eleanor didn’t show signs of being sleepy at the same time every night, but she did show hunger cues every two hours or so. In those early weeks, I’d bring her upstairs for the night as soon as she was hungry anytime after 9:00. Our routine is simple: I pull the window shade down, Brandon says goodnight to her, I change Eleanor’s diaper, put her in pajamas, nurse her, and rock her to sleep. She didn’t always fall asleep though, and there were many nights spent rocking her or walking around the room with her for hours. When I say I got her to sleep through the night without crying, I mean without ‘crying it out’ (the Ferber method). She did cry sometimes, but I (or sometimes Brandon) was holding her and trying to soothe her the whole time. I did NOT bring Eleanor back downstairs though, even on the particularly difficult nights. I wanted to make sure that I was setting up a clear difference between night and day. Sometimes I’d have to nurse her again if a lot of time had passed, but eventually she would fall asleep. Brandon and I did the same thing every night and soon we noticed that Eleanor would act sleepy around 9:00. It became MUCH easier to get her to sleep, and she no longer cried! Now, instead of hours our routine takes only 30 minutes, and her bedtime has been pushed up (by her cues) to 7:30.

Sleeping Through the Night

Eleanor sleeps at night in a cradle in our bedroom, and for a long time I rushed to scoop her up and feed her the second she made any noise. The biggest turning point came when I realized that she wasn’t necessarily waking up each time because she was hungry. Sometimes she was of course, but sometimes she was just stretching or making a little noise. I started waiting just a minute and to my surprise she often went back to sleep on her own. YES! Letting her learn to settle herself back down led to longer and longer stretches of sleep, up to five hours by the time she was four weeks old.

I already mentioned my insistence on establishing a clear difference between night and day for getting Eleanor to sleep, and I think that was a big part of getting her to sleep through the night as well. I interact and play with Eleanor all day, and I narrate my actions and sing to her. In the middle of the night though it’s all business. When she wakes up, I quietly pick her up and bring her over to the changing table. I turn on the lamp at it’s dimmest setting, change her diaper, and then nurse her in the rocker. She usually falls asleep after nursing, but if she not then I rock her until she does and we’re both back in our beds within about fifteen minutes.

At two months old, Eleanor goes to sleep at 7:30 and sleeps for eight hours. She wakes briefly around 3:30 and then sleeps again until 7:30 am for a grand total of 12 glorious hours.

Now about that daily shower…

I’ve gotten that since she was about three weeks old. I noticed that Eleanor was always in a good mood when she woke up, so one day I decided to try and shower while she sat in her bouncy chair. I think that was the fastest shower I’d ever taken because I was convinced she’d start crying at any moment. She lasted about 15 minutes. I tried it again the next day, and the day after that, and she lasted longer and longer each day. Now I have a nice morning routine with her. 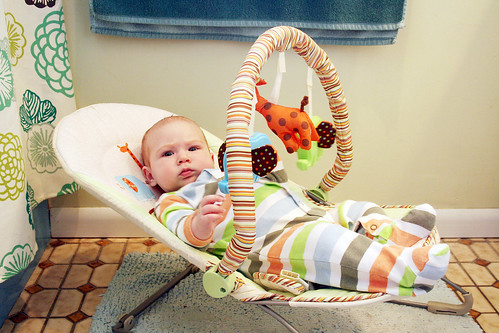 I tell her “good morning” when I go to pick her up, and she usually gives me a nice big smile. We have a little one-sided conversation (although she coos back now) before I change her diaper and nurse her. Then I bring her bouncy chair into the bathroom and set her there while I shower, dry off, get dressed, dry my hair, and put on makeup. Once I’ve finished getting ready, I get Eleanor dressed and we go downstairs. I quickly eat breakfast before feeding Eleanor again, and then she takes her first nap of the day about two hours after she woke up. It doesn’t matter what time she wakes, she’s always ready for a little (20-minute) nap after two hours.

Every Baby is Different

I know that, and I know that I’m very lucky with Eleanor. My mom says I was the same way, but that all three of my younger siblings were very different. Many of you had written to me though, asking if I had any tips to share. I hope that this helps some of you. Good luck! 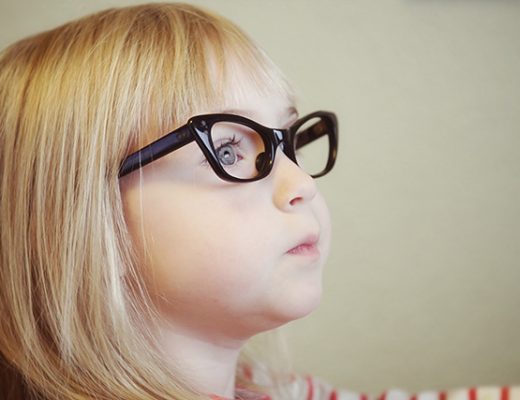 I’ll be Your Mirror