How much of this have I shared already? I feel like I’ve touched on the reasons why we chose this house, but I don’t think I’ve told the whole story and I’d like to.

You already know that it was the Wright Plus Housewalk that did us in. Here’s what I wrote at the time.

“Brandon grew up in the Frank Lloyd Wright Historic District of Oak Park, and after walking around the area all day, I was charmed. We like our side of town, but if we can find an affordable house in the historic district that will work for our family, we’ll go for it. The smaller/outdated homes do pop up occasionally. We’re not in a hurry to move, but I suppose we ought to start preparing our house so that we’ll be ready when the right house hits the market.”

What I didn’t mention then was that I had stopped in an open house at the end of the day. I had just toured nine private residences, but the house for sale was a charming painted lady Victorian (now our charming Victorian) and I thought “what’s one more?” I loved it, and when I got home, I asked Brandon what he thought about moving. He wasn’t interested in picking up and moving clear across the country (ahem, San Francisco), but he was excited about looking for a new place here in town. I told him about the open house, and we talked about how nice it would be if we could find something like it. We weren’t considering this house an option at that point because we thought it was out of our price range. The seed was planted, but we thought we’d take our time.

“There are still things to do to this house, and I think Brandon would be happy staying put. It’s a great house, and we’ve made it really nice over the last six years, but there’s only so much we can do before we start to over-improve a property. If we knew we were going to stay in our home for another six years, we wouldn’t worry about it, but I’m ready for new projects. A new adventure! And when I talked to Brandon about it, he agreed that he was ready too. We’ll be looking for a new home, here in Oak Park, but hopefully in one of the historic districts.”

We did still love our side of town. Oak Park is somewhat divided in half, north side vs. south side. The north side is generally considered the more desirable part of town, though I’d argue that the south side is where is at. There’s the Arts district, the L (Blue Line), and an amazing park and pool with a conservatory across the street. The houses are cute, and there are tons of families with kids. (Families that still want to live near downtown Chicago but desire better schools often flock to either Evanston or Oak Park.)

At the center of Oak Park though, are the historic districts. There’s the aforementioned Frank Lloyd Wright district, and just across the tracks, the Ridgeland district. Both are still an easy walk to the L (the Green Line this time) or Metra, and there are parks, the main branch of the library, cute shops, and a lot of great restaurants. There are still plenty of families with kids, but the houses are more architecturally distinct — hence the historic demarcation. This walking tour of FLW in Oak Park can give you an idea of what some of the homes look like in the area. (Also, please note #16, the Oscar Balch house. No relation!) 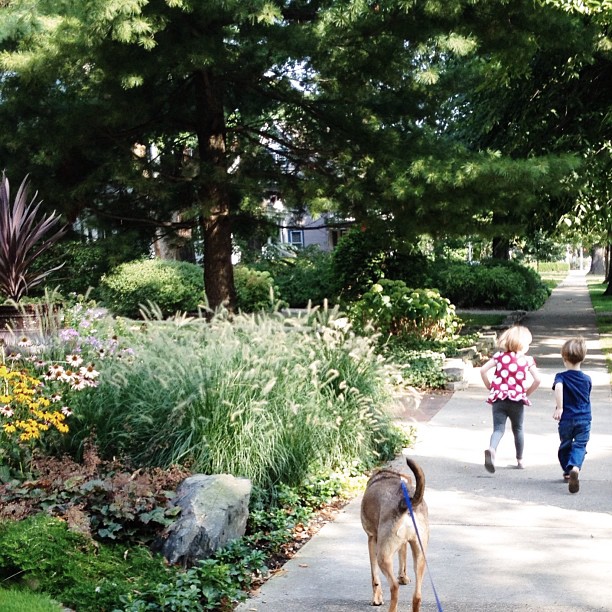 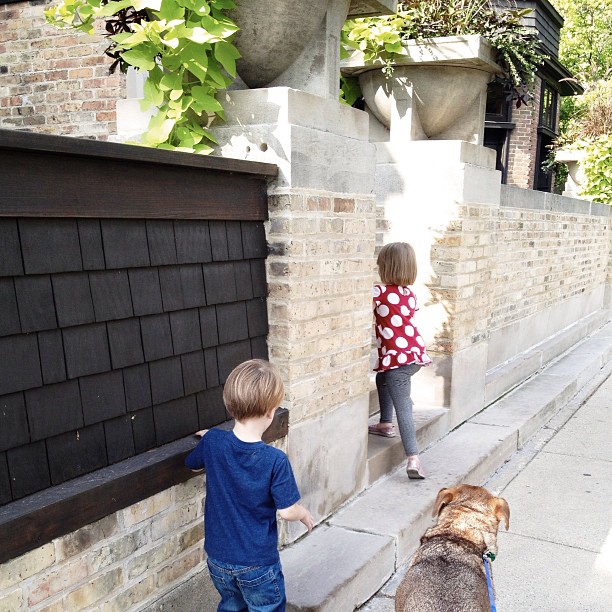 Size, and the Market 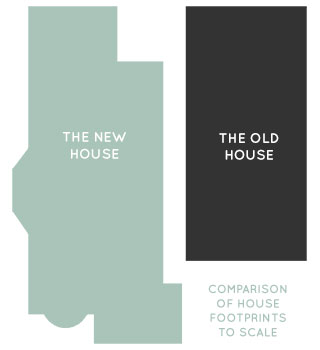 Our new house is larger (it is 3100 sq ft) than the last, but we weren’t moving for lack of space. The records list our old house at 1600 square feet, but that doesn’t include the finished basement. We really had more like 2200 square feet of liveable space, and we hadn’t outgrown it. We also hadn’t completely finished the home or run out of projects. The real estate market here was picking up though, especially for ‘starter homes’ like ours.

After touring a ton of houses for sale, we realized how badly we wanted the Victorian, and Brandon and I scrambled to get our house on the market. We accepted an offer after five days and 16 showings, with another dozen upcoming showings that we then cancelled. We broke even when we sold, after you factor in the major upgrades we put into the home. It would have been nice to turn a healthy profit, but there are homes here and across the country selling at a loss, so we’re grateful to have made our money back. We had enough equity in the house (our initial down payment in 2007 came mostly from an inheritance) that we were able to put a large down payment on the new home, and still set some aside for initial projects alongside a rainy day fund.

We were long past the initial move-in phase at our old house, and I’d written before about how I missed that early frenzy of activity. The rush of possibilities! The chance to start anew! Our first house was similar in a lot of ways to the apartment Brandon and I shared years ago, but my taste had changed a little, as it’s always changing a little. (Wouldn’t it be a bore if we never tried anything new?)

Brandon and I assumed we would wait for a fixer-upper of a house, thinking it would be more affordable. And come on, you guys are no dummies! A new house equals new projects, which equals blog content. That was another good reason to buy a fixer-upper. I have a solid skill-base from my days long ago as a handyman’s assistant, and I’m always willing to jump in and learn how to do something new. So we searched for something with solid bones, but that needed some love. The problem with that is that almost all of the houses in Oak Park are at least a hundred years old, and the ones that need a little love usually need a LOT of love. (Exhibit A. Exhibit B.) We wanted a house that we can live in while doing the renovations — nothing dangerous for the kids to be exposed to or that would be uninhabitable for a period — that would provide plenty of projects.

But it turns out we fell in love with a house that was already in good shape, that was already beautiful. We can’t let the blog completely dictate our lives, to the point of walking away from a house in the location we wanted, that we could afford, and that we were crazy about, because it was too nice. The electrical and plumbing have been redone already — a huge plus. I love the wood trim here. I even like a lot of the wallpaper. There are always going to be things to do in an old (very old) house and of course there are plenty of projects, but we’re starting from a fantastic base. It would have been silly to turn down a house that was so right for our family because it wasn’t what I thought would be the right kind of blog fodder.

Eleanor and August took to this house immediately. When we first brought up the idea of moving into a new house, Eleanor requested that we buy “a rainbow house.” We took the kids with us to each property that we toured, but this Victorian is the one that she deemed worthy of The Rainbow House moniker. There is a closet with two entrances that she and August think is a secret passage. The nook on the third floor with the stained glass window is another such secret passage, made even better by the fact that the door is scaled to their size. They call that “the rainbow room” — fitting, for a rainbow house.

They talked about this place constantly after seeing it. It’s nice that they fell in love with the same house as their parents! And here, they will go to the same schools that Brandon and his sisters did as children. The floor plan has several loops (give me a Victorian over an open-concept any day) that they love to run. The clawfoot tub is just right for bubble baths, and they can reach the sinks without a step stool — a small detail, but one that makes them happy. Their rooms are perfect for them, and we all love going for walks in the neighborhood. This house is the right one for us for so many reasons, and I feel really lucky to be here.

We hope to be here for a long, long time. 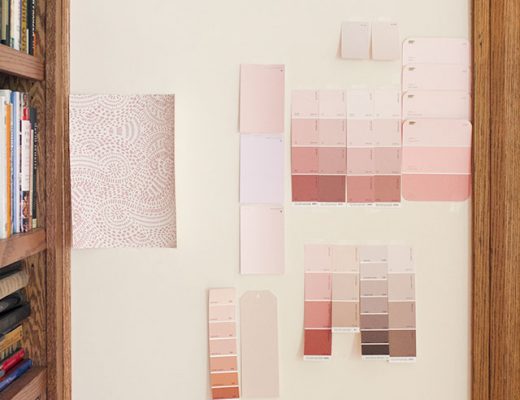 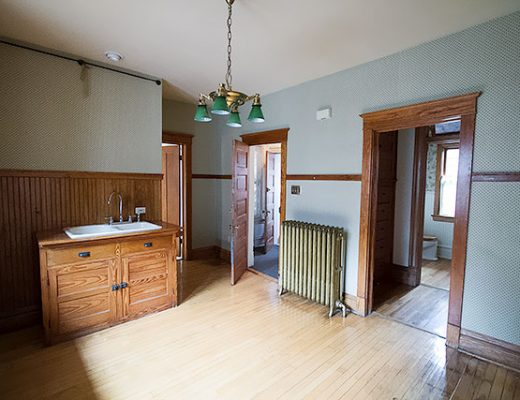 The Victorian House: The Rest of the Second Floor

November 5, 2008
Previous Post Fabrics for the Kids' Rooms
Next Post The Double Parlors, Shortly After Moving in